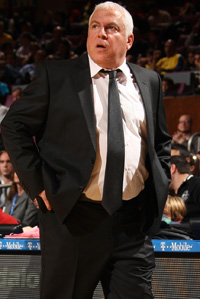 NOTE: This video translates only select quotes and has been often taken out of context.– Ed.

The zany Maccabi Tel-Aviv coach who had to be removed by a rabbi following his ejection from an exhibition game with the Knicks Sunday once had some very curious theories on how the skin tone of his players could separate a smart player from a dumb one.

In this videotaped 2000 speech, Pini Gershon said that players of mixed heritage – or “mocha,” as is translated in the video – are smarter than players of darker complexions.

“The ones who are more mixed, like Andrew Kennedy for instance, (an American-Jamaican player who played with Hapoel Galil Elyon in the Israeli league during the 90s) you sense their position, their personality, he tests you. He’s smart,” says Gershon, much to the obvious discomfort of the the Israel Defense Force officers in attendance. “The other blacks are really stupid. They are like slaves. They do whatever you tell them to.” Gershon would later claim that he said those statements in jest.