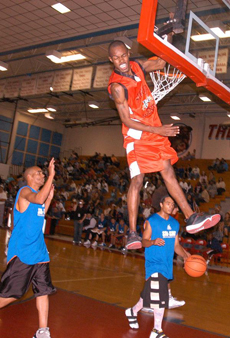 Michael Hawkins is a baller. He’s a lefty with a slippery drive to the hoop, a quick release on his J, and a cock back so good, you’ll wanna slap yo’ momma (Like the Friday sequels).

When people think about the roughest dunkers on the asphalt, you might mention some of the TFB cats, or possibly Emak ‘n Los. Don’t forget about Street Handles, one of the best street crews in the business, haling from Phoenix, AZ. Michael played a stint in the ABA, he’s part of the Ball Up squad now, he even ran with AND 1 for a bit. Michael Hawkins has been all over the map, but he’s still the best kept secret in streetball.

SLAM: What’s up Hawk? Thanks for dropping by to answer some questions.
Hawk: What’s up… thanks for having me. It’s always a pleasure.

SLAM: First up congratulations on making the Ball Up team, your first game for Ball Up is at the LA Dub show this weekend, What exactly is the Dub Show for those that don’t already know?
Hawk: First off, I would like to thank God for putting me in this position. It’s been a long time coming. Secondly, thank you. Now for those who don’t know about the DUB car show, it’s one of the biggest car shows in the world. You will see cars from celebrities, including athletes and music artists as well as people that have a passion for working on cars. It has a very large fan base and there are about 12 stops this year throughout the country.

SLAM: Looking at the Ball Up roster you’ve got some of the biggest names on the circuit with the likes of Professor, AO, Sik Wit It, AUT, etc. What’s the story with Ball Up, and how did you get involved with them?
Hawk: Ball Up is an organization that was put together by a group of guys with an overall view to influence youth to never give up on your dreams and just because you don’t make it pro doesn’t mean you can’t live the pro lifestyle or be successful in life. I was approached with the opportunity of being a part of Ball Up and decided that it would be the best move to play alongside some of the biggest names in the streetball world. This is a very talented roster from top to bottom and we plan on making history.

SLAM: The Ball Up team was in Phoenix for the All-Star weekend last month, was this just a once off thing or will the team exist outside of the Dub Show Tour?
Hawk: I’m not too sure of the plans Ballup has but should know more within the upcoming weeks. I will make sure to keep you posted with any new information.

SLAM: Arek Kissoyan (known in the mixtape game as mixtapelive, one of BIL’s main editors) dropped a mix of you a few weeks back on Ballislife.com which had a lot of people talking, as far as Street Handles and Ballislife go, what are some of the things you guy’s are working on?
Hawk: Yeah shoutout to Mixtapelive and as far as Street Handles and Ballislife goes, we are currently working on dropping some of the hottest clips and finishing up the next DVD, which is guaranteed to be three times better than the first.

SLAM: We’ve heard you mention BKS a few times, what is the story behind this?
Hawk: I was mentioned BKS by Mixtapelive on my last clip. For those of you who don’t know, BKS stands for “Best Kept Secret.” I’ve heard this name many times throughout my streetball career and I actually kind of like it. I don’t

feel like I’m the only best kept secret, but I am definitely one that you can expect to see a lot more from.

SLAM: You played semi-pro ball last year in the ABA, what was that experience like?
Hawk: Besides most of the teams folding, it was a good experience and helped me work on my all-around game a little more as far as organized basketball.

SLAM: Will you be playing again this year?
Hawk: I’m not sure right now. I might have other commitments with the Ball Up team.

SLAM: What are some of the things you do to work on your game? Jump programs, drills, workout? Or do you just ball?
Hawk: I work on my game a little bit every day, whether it’s going to the gym and lifting weights or playing in pickup games or just shooting around to stay in shape. I am not on any jump programs or specific drills, I never really got into those types of things I just go out and play the game.

SLAM: There’s always discussions about who the best dunkers in the world are and your name isn’t mentioned all that much, why do you think that is?
Hawk: Because I’m not just a dunker. I don’t have two or three hours to just sit in the gym and record dunks. As you can see, most of my dunks come in games or waiting for the next game. I’ve never been all about dunking, just something that I was blessed to be able to do.

SLAM: With the downsizing of the And 1 Tour last year, what do you think of the current state of commercial streetball?
Hawk: I’m sure there’s always gonna be loyal fans of AND 1 but the downsizing opens doors for other streetball crews as well as tours.

SLAM: Out of all the underground ballers you’ve played with and against who do you think has the most potential to make a living off of streetball.
Hawk: I would have to say my top three are Bone Collector, High Rizer, King Handles. Everybody else that I feel has the potential to make a living off streetball has either done it or is currently doing it.

SLAM: What are your future plans?
Hawk: I don’t know what the future holds but I hope to continue to be successful in the streetball world and continue to be a role model for my son and those who look up to me.

SLAM: Any last words?
Hawk: I want to thank God first for answering my prayers. As always, thank you for the interviews and continuing to support me and Street Handles, as well as all of the underground streetballers trying to make a name for themselves. I wanna tell all those who haven’t been as successful to never give up on your dreams and keep God first. Play every game like it’s your last and stay ready, because you will never know when your time will come. I would also like to thank everyone who supports me as well as the Street Handles family. Also, look out for the Ballup tour which will be coming to a city near you in the near future. For the current dates and locations you can check out Dubshowtour.com.

Major hat-tip to Brad Taylor of Streetballin’ for the hook-up. 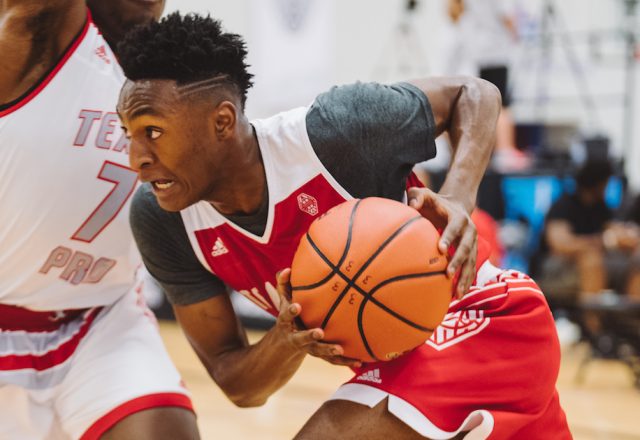 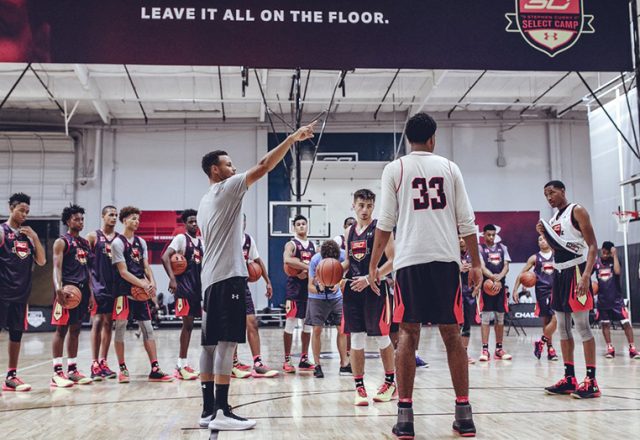