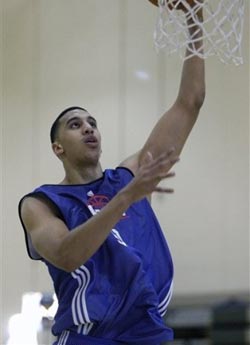 Reports from the NBA Draft Combine heaped praise on the 19-year-old center, after two days of strong workouts. ESPN’s Chad Ford reported that he “shot the ball well, was very fluid running up and down the court and showed a sound basketball IQ.” His measurements were just as impressive — he’s the third-tallest prospect at 6-11¾, and has a lithe frame that could comfortably carry another 20 pounds. Richards also turned 19 years old on April 24, making him the youngest player in the 2010 Draft. He’s aggressive and intense, something European players are not known for.

His potential is huge, but so is his enigma.

Richards first landed on NBA radars in 2007 when he became the youngest player to play in the Nike Hoop Summit at the age of 15. Yet, Richards does not play for the Great Britain national team, and spent last season with BBC Monthey in a Swiss Division 2 league. In the six games he played before dislocating his shoulder, Richards averaged 13.3 ppg and 5.2 rpg while shooting 56 percent and a beyond-impressive 91.3 percent (21-23) from the free-throw line. What’s more, it seems as though Richards will not attend the adidas EuroCamp in Treviso, where most European prospects look to solidify their stock before the Draft.

Clearly, there are question marks over the advice he’s taken.

As for what Richards feels he brings, “I’m 6-11, versatile, can play inside or outside, can shoot the ball pretty well, put it on the floor, spread the floor,” he said. “Guys like Dirk Nowitzki are really changing the game. I’m very comfortable facing the basket. I like to watch a lot of Chris Bosh, Lamar Odom, Rasheed Wallace — how they can spread the floor. They are the type of guys I follow.”

Despite his time in the wilderness, Richards’ size, range, guard-like agility, youth, and intensity give him the look of an NBA first round pick. But why don’t you make a decision for yourself? Thanks to Hoopsfix, we have fresh highlights from Richards’ past season with BBC Monthey and the 2009 England Under 18s.