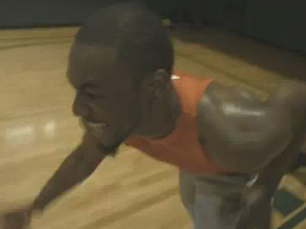 This footage initially was included in the longer Under Armour commercial that we posted last week, but this is a pretty cool, short vid. In it, Bobcats guard Kemba Walker displays some of the athleticism that made him a first round pick, as he fights against a weight pulling him in the opposite direction while he dribbles up the floor and eventually finishes with a strong lay-up.