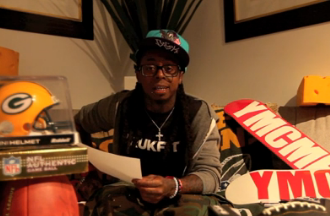 Merry Christmas! Santa brought us something hilarious this morning—Lil’ Wayne breaking down the NBA! In one segment of his newly created “Weezy’s Sports Corner,” the New Orleans rapper interviews ex-Hornets PG Chris Paul via speakerphone, and then gives us his season preview and predictions. At one point, Weezy reads off a list of recent transactions, complete with his personal comments, which include: “I don’t know who Michael Ruffin is. The only Michael Ruffin I know is the singer.” His Finals pick? Heat over Lakers. Oh, and what does he say about CP3’s new squad? “The Clippers, they’re gonna be terrible. Terrible as in good.”