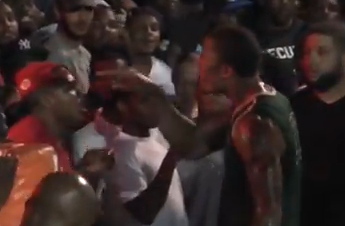 Earlier tonight, word spread about an incident that went down at Dyckman Park, when Michael Beasley reportedly mushed a heckler’s face after the spectator was bothering B-Easy during the game. We’ve got some half-decent footage of the confrontation above, and we’ll have plenty of other highlights from the contest—during which Beasley repped Team 914 and Kevin Durant played for Team NIKE—tomorrow morning.