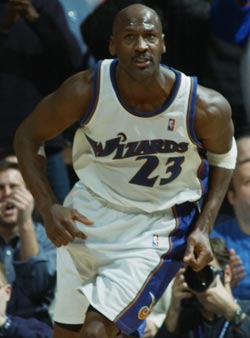 Almost everything Michael did in a Wizards jersey pales in comparison to Michael’s accomplishments in Chicago. Except this. On February 21, 2003, Jordan became the first 40-year-old to tally 43 points in an NBA game. It would be Mike’s last on-court mention in the record books. Now, as the CEO of the Bobcats, can MJ etch his name in history again?