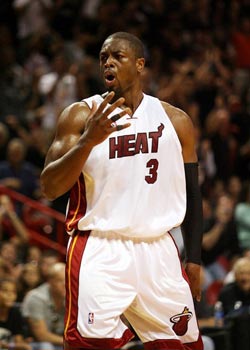 We’re already down to four — four teams repping the 2010 Playoffs. The Boston Celtics didn’t transplant themselves to a 2-0 lead in the Eastern Conference Finals, they battled teams with different superstars (including three First Team All-NBAers) and role players. Brandon Roy’s comeback attempt proved ill-fated, but his return forced the red-hot Suns into momentary remission, before they won the series in six games.

Meir, another of M2’s legion of hoops Mixmaker extraordinaires, takes us through each first round series of the 2010 Playoffs. It was here were we watched the Bucks clip the Hawks wings, the Celtics return to form, the Bulls expose a chink in a Cleveland juggernaut, DWill match all-time best PG numbers, MJ taste his first Playoff sweep as a GM, the Mavs fall short yet again, and a new NBA city show its immutable pride.

Start at 30, then 16, eight; now it’s four… and eventually two and then one. Almost every team sees elimination. It’s this — the battles — that survive.