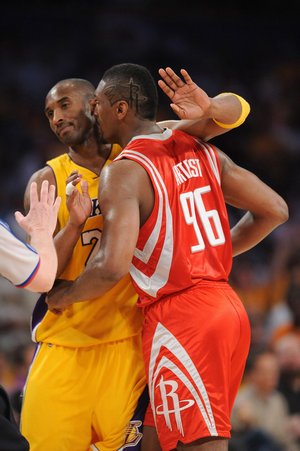 The Lakers did what they had to do last night, and tied their series with the Rockets. They defended, scored, and got physical. Sometimes, a little too physical. Accoring to Ron Artest, anyway.

Ron-Ron — who had every right to be upset with Kobe after getting elbowed in the throat — was the story for his ejection, but he wasn’t the only Rocket who left the game in less than admirable fashion.

Lost in the shuffle was Von Wafer’s ejection from the game. The Houston Chronicle reports:

In between, in a sign of the passions the series had so quickly stirred, Lakers guard Derek Fisher had already been ejected for a flagrant foul of Luis Scola, and Von Wafer had been sent off the court when he threw a water bottle after being removed from the game.

Adelman and Rockets general manager Daryl Morey called the incident “a team matter.” Morey would not say if there would be further repercussions.

The series shifts to Houston tomorrow night, where Rockets fans are hoping their team can regain its composure as the pressure and tension mount. Good luck with all of that.