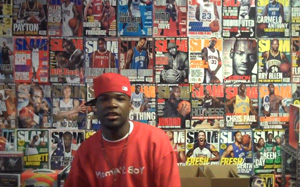 Never heard of Tito Lopez? That will soon change. The Gulfport, Mississippi native, who has been co-signed by Dr. Dre, dropped by the SLAM Dome to spit some bars for the masses. Tito just dropped his single, Mama Proud, to go along with his mixtape and is sure to be at the tip of ever hip-hop fan’s tongue by the end of the summer. Keep an eye out for a full Tito Lopez feature on SLAMonline coming in the very near future.