Video: Top 5 Plays From Tournament of the Stars 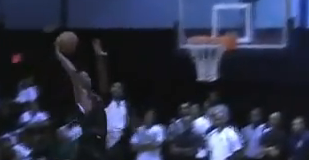 The Tournament of the Stars went down this weekend, and a bunch of NBAers—including James Harden, Glenn “Big Baby” Davis, Stephen Jackson, DJ Augustin, TJ Ford and Von Wafer—showed out. Here are the event’s top five plays, including a clutch hoop from Davis, a mean throwdown from Wafer and a string of intense buckets from Harden. (H/T: Hoopmixtape)