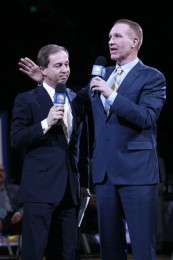 During what was supposed to be a joyous occasion for Chris Mullin and the Golden State Warriors, an ugly and surreal scene developed last night in Oakland, with fans raining boos down on relatively new team owner Joe Lacob. They were angry with the ownership group for having traded away Monta Ellis, and seemingly having thrown in the towel for the rest of the season.

Chris Mullin and a very angry Rick Barry tried their best to reason with the crowd, but the boos would not stop whenever Lacob took the mic.

After the game, which the Warriors lost to the visiting Minnesota Timberwolves, Lacob and his employees gritted their way through the embarrassment, and tried to spin the whole fiasco in a positive light.

From the Mercury News:

“Obviously, probably has something to do with the recent trade and some of the fans being upset with that,” Lacob said after the game. “But I think that they will love us, the ownership group, that is, when we win. And we will win.”

Right. Good luck with all of that.