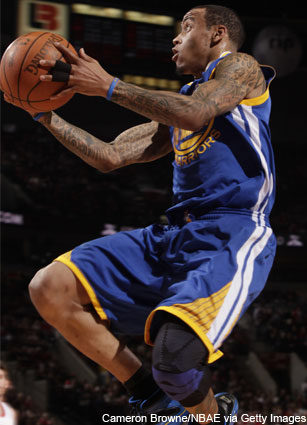 For Monta Ellis, nothing came easy.

Coming out of Lanier High School in Jackson, MS, the 19-year-old lanky guard plummeted to the 40th pick in the 2005 Draft, where the Golden State Warriors took a chance on him. Due to knee surgery, Ellis was unable to play in the summer league circuit, and when the 2005 season began, he found himself at the end of the Warriors bench. It all made sense. After all, the 40th pick should feel lucky to even make an NBA roster, right?

Wrong. Fast-forward six years and you have a player who consistently ranks top-10 in the NBA in scoring and steals, as well as top-20 in assists and three-point shooting. Dubbed “The Mississippi Bullet” for his blazing speed, the 6-3, 185-pound guard always finds a way to slither into the paint and make a play at the rim. Ellis’ uncanny ability to score in bunches and hit difficult shots has placed him among the best shooting guards in the League, and in 2007 the Warriors took notice, signing Ellis to a six-year, $67 million deal.

In honor of his 26th birthday today, we’ve compiled 15 of the best moments of Ellis’ career thus far. There’s some memorable single-game performances, a few nifty moves and vintage tape from his high school days. Considering he’s only approaching his prime, you can bet this won’t be the last time you see the Warriors star all over our highlight reels. Until then, happy born day, Monta!