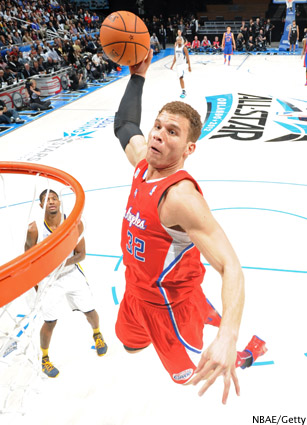 It’s only been one and a half seasons and already Blake Griffin is, at very worst, the fourth best power forward in the world. After sitting out his “rookie year” due to a broken left kneecap, Griffin’s inaugural campaign was one for the ages. Blake hijacked the record books, took a black sharpie, crossed out whatever was in there and then rewrote the damn thing. I can only speak for myself, but I can’t recall a time when a rookie had that much of a presence in my life. You couldn’t complete an episode of SportsCenter without at least one Blake Griffin mention or highlight. With Blake, it was more than must-see TV. It was more like, “Blake Griffin is on TV? Oh, ight, I’m good for the night. Trust me, I’m really, really good for the night.”

Perhaps the craziest—or best—aspect of Griffin’s takeover was the fashion in which he came through. Blake’s game was, and in many respects still is, utterly based on superhuman explosiveness, athleticism and instinct. Not to say his offensive arsenal isn’t developing (I see you, Blake), but Griffin’s accelerated success (Rookie of the Year—22.5 points, 12.1 rebounds, 3.8 assists—two-time All-Star, first rookie since Yao to play in the ASG, arguably the best PF in the L, etc) started with and has stemmed directly from his leaping abilities. That’s why today, on his 23rd birthday, we’re here to celebrate Blake with a gallery of his best throwdowns.

Here at SLAMonline, we’ve celebrated Griffin’s dunks many times over, so to switch it up this gallery showcases Blake’s “throw it up, watch me get it and look what I do with it” side, AKA his alley-oop finishes. The gallery commences with 12 Honorable Mentions, and then proceeds to rank his 23 best alleys to date. There’s both rookie and sophomore tape, some you’ve seen and some that have probably slipped from your basketball memory. Although in the bigger picture Blake’s game and career are merely in their prenatal stages, Griffin has already treated us to more highlights than most NBA players have over the course of a long career. So roll through the gallery above to celebrate one of the best dunkers, power forwards and rising stars the NBA has ever seen. Happy born day, Blake!