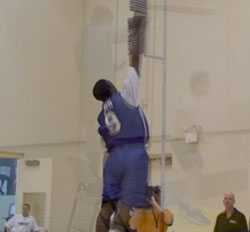 A dozen cylindrical timing devices that shoot light beams have been set up in a series of grids. They flash red, then white, then green. Electronic wristbands are swiped across readers that feed information back to a command center, a line of tables packed with computers, monitors, and video cameras, run by a guy who looks like a tech wizard from Microsoft, because he is. The information from a wristband is shot back at lightning speed to a hand held computer and one of the official monitors at a test stations, who all wear grey shirts. What’s happening? Another wristband is swiped, a foot is placed just behind a taped line, knees bend, ready, set… the light turns green. A body explodes into a sprint, a series of lights flash all the way to the finish line.

Welcome to the 2009 NBA Combine at ATTACK Athletics in Chicago.

At this year’s Combine, for the first time in the event’s history, the League introduced a new high-tech system to time and record the athletes in their speed and agility tests. The era of the stopwatch and clipboard coach is on its way out. Now it’s hand held computers and Excel spreadsheets. This is the NBA’s first high-tech draft class. Call it the Obama effect. Change has also arrived in the NBA.

This change satisfies the growing hunger teams have for data to crunch, devour and digest: more data—more accurate, precise and specific data—can be dropped into computer programs to be sorted, analyzed and quantified for the right mix of ingredients, to choose the best draft pick.

To make this high tech transition, the NBA collaborated with BAM Testing. Former Mavericks strength and conditioning coach Brett Brungardt founded BAM, which stands for Basic Athletic Measurement. BAM specializes in athletic testing and information technology. Its goal was to take a historically well-run and solid testing process into the 21st century, using light beams that hit the body in three different areas, timing multiple phases of tests, and generating detailed data results to the thousandth of the second.

“I’ve been a strength coach for 25 years, so I understand the issues from an insider’s point of view,” Brungardt explains. “A constant challenge is getting accurate information. For example, after having an athlete for a few months, a coach comes up and asks, ‘What’s John Smith’s vertical jump?’ Twenty-five inches in our last test, I’d say. ‘How can that be?’ the coach asks. ‘He was jumping 26 when he came here.’ I’d have to explain that information wasn’t accurate. The goal of BAM is to give coaches and teams verifiable and accurate information.”

Daniel Shapiro, the strength and conditioning coach for the Sacramento Kings and President of the NBA Strength and Conditioning Association wants to keep the NBA on the cutting edge of technology. “Bringing in BAM to assist our testing protocol is just one example of how we try new ways to help the NBA evaluate players and improve performance.”

This year’s Combine had two changes: 1) No live three-on-three games, and 2) Switch to a high-tech measuring system. Removing live competition was to get the highest number of top draft choices to attend the Combine. The goal of high tech testing is to create new and exciting “measurables,” as the numbers gurus, scouts and agents like to say. They all like measurables.

The real breaking news from the 2009 Combine is new measurables. As dry as this may sound to the average fan, these new numbers will create a flurry of activity. The first new set of numbers that BAM Testing gives the NBA is in the Lane Agility Drill. A player runs around cones that the outline the NBA lane, a rectangle shape (19 feet long by 16 feet wide), moving forward, side-to-side and backwards, both clockwise and counter-clockwise. Six new numbers or data points were created to track the time in forward, lateral and backward movements. This method replaces the old stopwatch time, which gave just one time for the whole test.

The second new set of numbers comes in the Three-Quarter Court Sprint test. The NBA will now have two new data points: from base line to hash mark (28 feet, approximately 10 yards), which will show the initial burst of speed. Then from hash mark to opposite free throw line, which will show finish speed, a player’s second gear (47 feet, approximately 16 yards). Again, this method replaces the stopwatch, which just gave one time for the entire test. Time will tell how these changes affect the way NBA teams look at draft choices and evaluate talent.

The Gurus of Data

At the 2009 MIT Sloan Sports Analytics Conference, Dean Oliver, Director of Quantitative Analysis for the Denver Nuggets, gave an anecdotal example of the impact of sports analytics (analyzing data to improve performance or looking for the secret sauce) on the NBA: Those franchises who have committed to analyzing data represent teams at the top of the League, while franchises who haven’t committed represent the bottom. In the NBA, the numbers game, the game within the game, is becoming a force. Data is becoming God. You just have to know how to interpret the data to gain wisdom.

Daryl Morey and Jessica Gelman began the conference in 2007. Morey is the General Manager for the Houston Rockets and Jessica Gelman works for the Kraft Sports Group and the New England Patriots. Gelman also has her MBA from Harvard and as an undergraduate was captain of the women’s basketball team, which won two Ivy League Championships. She finished her career as the all-time Harvard assists leader.

The conference began as a small non-profit startup devoted to sports analytics. The 2009 event was a sell-out with a 150-person waiting list, dozens of media requests and major sponsors. This explosion in attendance shows the growing passion for this topic, from fantasy sports leagues to bestselling books like Freakonomics and Outliers. This year was a coming out party for basketball. The session was filled with celebrities, including: Mark Cuban, Ray Allen, Jeff Van Gundy, Marc Stein, John Hollinger and Bill Simmons.

Gelman sees the NBA as the last frontier of the three major sports. It’s a frontier that’s rapidly closing as it becomes a necessity for teams to stake their claim in mining data for gold—gold meaning a championship ring. “This was our biggest year for an NBA presence. Teams like the Rockets, the Celtics and Mavericks are pushing it to the next level. As the data improves and becomes more useful, like the new Combine testing this year, the trend will get stronger and stronger,” Gelman explains. Sports analytics goes beyond the way teams evaluate talent and game time strategies, it also impacts business choices.

When a player tries to go pro, one of his key relationships is with his agent. Steve Olenick, a basketball agent for Entersports, has to walk the middle path. He has to see things from the players’ point of view, nurturing and investing in their growth, while seeing the business angle. Unless he’s dealing with a first round lottery pick, he has to sell his clients to teams. “When money gets discussed the ‘measurables’ become very important. Teams have to minimize risk. If a guy has lights out numbers, he’s 7-0, weighs 275, has a 35-inch vertical jump, and a 7-4 wing pan—teams will bring him in. They’ll say, ‘he’s intriguing.’ If he doesn’t have those numbers you have to be more creative in how you present a player to teams. But numbers can definitely help you get a look.”

On stage at the MIT conference are the elite gurus of analytics who will surely one day rule the world… Or at least continue to make an impact in the NBA. One of them, Mike Zarren (the spreadsheet expert for the Celtics), already has a ring. The other panelist’s teams—Mark Cuban (Mavericks), Morey (Rockets), and Oliver (Nuggets) advanced to the NBA’s Elite Eight this year. These teams and other leaders in the quest to discover the secret sauce—that right mix of data, cooked just the right way—salivate at the thought of more useful numbers to crunch. As Oliver puts it, “We want numbers that can tell a meaningful story, not just kill trees.” The NBA has answered their call by giving them more detailed test numbers.

“The teams and agents will eat these numbers up,” Olenick says. “What the NBA Combine has done by bringing in BAM is a sign of the future. The BAM testing protocol offers more data points. And believe me all interested parties will crunch that data and understand what each new data point means. They will rate, over time, the impact lateral speed and the first 10 yards of the sprint has on the probability of being a success in the NBA. That will change the way players are chosen in the draft.”

The Alchemy of Numbers

With the initiation of the first high-tech class, the NBA has offered up more viable data to analyze athleticism and performance. The consensus among coaches and key NBA staff is positive. This will help coaches set goals for players. It will help the training staff rehab injured players by giving a more complete picture when a player is 100 percent, beyond the qualitative response, “I’m ready to play, coach.”

Shapiro sums it up: “The NBA wants the best data available to evaluate and improve performance. We welcome new technology that is good for our athletes and good for the League.”

The analyzing never stops. In the stands at the Combine, unknown scouts make their notes next to legends like Larry Bird and Pat Riley. Just like people praying 24/7 in Catholic churches all over the world for a second coming, there is a brain trust in the NBA trying to crack the magic equation to quantify talent, to transform the intangibles into a set of data points, to discover the secret sauce for picking a sure thing—basketball’s version of the second coming, the next Michael Jordan.