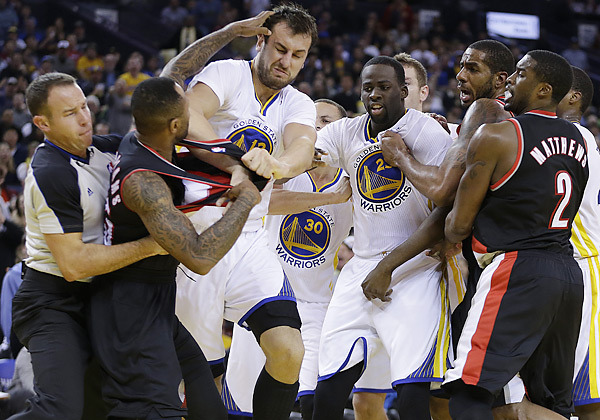 A shoving match between the Warriors and Blazers erupted at Oracle Arena late in the third quarter on Saturday. Mo Williams was ejected for running at Andrew Bogut after Joel Freeland and Bogut got tangled up in the paint. Portland’s hottest player, Wes Matthews, was hit with his second tech and was also ejected. Draymond Green was ejected for getting off the bench. Bogut, Freeland and LaMarcus Aldridge all received technicals. Bay Area News‘ Marcus Thompson recounts the altercation:

With 3:42 left in the third quarter, play was stopped  due to an altercation between the Warriors and Blazers. Two possible punches were thrown, though none appeared to have landed.

Andrew Bogut and and Joel Freeeland got tangled up in the key. Bogut shoved Freeland off him, and it look like he threw an elbow at Freeland that appeared to barely miss the Blazers’ big man’s chin. Blazers big man LaMarcus Aldridge then shoved Bogut in the neck. Mo Williams also jumped in to get between Bogut and Aldridge, and Bogut pushed Williams away, too. Williams responded by trying to push Bogut in the face, which may have been perceived as a punch because Williams was ejected.

It appeared the small shoving match was about to end but Wesley Matthews – who at one point was holding back Aldridge – suddenly needed to be restrained while going after someone near the Warriors’ bench. The raucous, which took place at the Warriors’ end of the court, spilled into the court side seats. Before long, Warriors’ Draymond Green – who was on the bench at the time – needed to be restrained by Mark Jackson and assistant coach Brian Scalabrine.

Matthews and Green also were ejected. Bogut and Freeland were slapped with technical fouls.

Despite getting the brunt of the punishment, Portland rallied and won the game convincingly, 113-101. The League office will now review the incident to determine if more discipline is necessary.