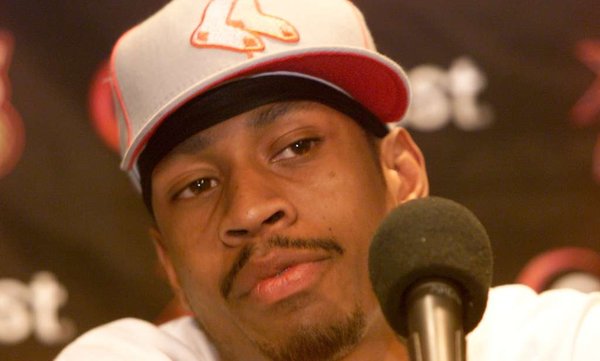 The recent “IVERSON” Showtime documentary delves into the icon’s most infamous moment, when an incredulous A.I. repeatedly asked the assembled media why they were asking him about his practice habits during his exit interview following the 2001-02 season.

Iverson and his people say he was not only upset about the Philadelphia Sixers flaming out in the first round of the Playoffs, but also devastated by the death of a very close friend.

A new book on The Answer is out (“Not a Game: The Incredible Rise and Unthinkable Fall of Allen Iverson”), and it is a highly-entertaining and unflinching look at his meteoric rise to NBA superstardom and depressing fall from grace.

According to the tome, Iverson’s former head coach Larry Brown thinks Allen was “very drunk” when he ranted about practice.

Brown and Iverson argued b4 "Practice" rant, and AI disappeared for a few hours. Brown believes he went to a bar, returned very drunk.

After his talk with Brown, Iverson left with a friend and returned later for the news conference. “I assumed he went and fooled around somewhere,” Brown said, tipping his hand up like a bottle, the author wrote in the book. […] Before the news conference, (GM Billy King) said he could tell that something was off about Iverson, but “if we thought that he was drinking or whatever, we’d have never done it.”

Wrote (Kent) Babb: “Some were entertained, and others watched the train wreck unfold, knowing from experience that Iverson was drunk.” […] King tried to think of a way to stop the press conference, the book said, while (Sixers president Pat Croce), watching on television, said he suspected Iverson was drunk and asked his wife to shut off the TV.

John Smallwood, a Daily News columnist who was in attendance, was also quoted as saying: “He was lit. If he had been sober, he would have been able to get himself out of that. He never would’ve gone down that path. Maybe you had to have been around him all the time to know the difference, but we all knew.” […] “They had no idea my best friend had just got killed,” Iverson said. “The press conference wasn’t about practice, it was about me (possibly) being traded from Philadelphia. Nobody ever talked about that, never heard why I was upset or what the conference was about.”