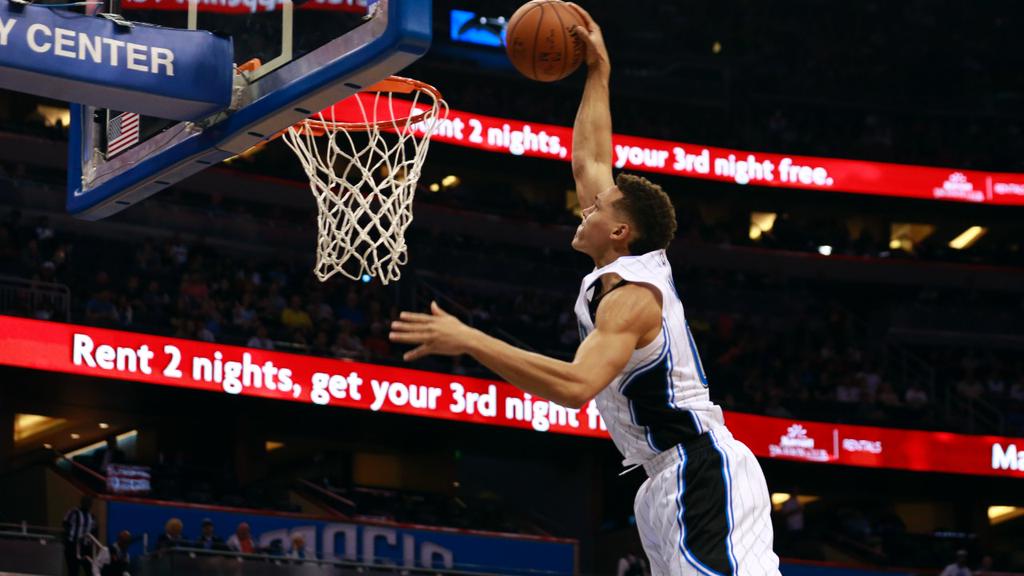 With Aaron Gordon recovering from a broken jaw, Orlando Magic fans had to wait a while to see the explosive second-year forward in action.

Gordon made up for lost time Tuesday night, skying for a pair of spectacular finishes.

The 20-year-old, who missed 31 games of his rookie season due to a fractured bone in his left foot, says he was thrilled about the way his preseason debut went.

Gordon played energetic defense, made decisive cuts on offense and gave the Orlando Magic a badly needed jolt of energy in a 95-92 overtime exhibition win over the Miami Heat at Amway Center. […] “Tonight went really well,” Gordon said. “I had a lot of fun out there, a little bit of rust.”

Gordon, a 6-foot-9 combo forward, likely is the Magic’s best one-on-one defender, combining quickness, strength and explosive leaping ability. […] “A super athlete,” Magic big man Dewayne Dedmon said. “He moves his feet well. He can guard anybody in the league.”

Magic coach Scott Skiles limited Gordon to 17 minutes against the Heat, and Gordon finished with 10 points, three rebounds, two steals and a block. […] Gordon didn’t appear to have any significant problems with the exertion. As he ran up and down the court, he seemed to have a little extra bounce to his step, and he also made his cuts decisively. But he went 5 for 10 from the field, missing a pair of jumpers from 20 feet, a jumper from 25 feet and air-balling jumpers from 10 feet and 14 feet.