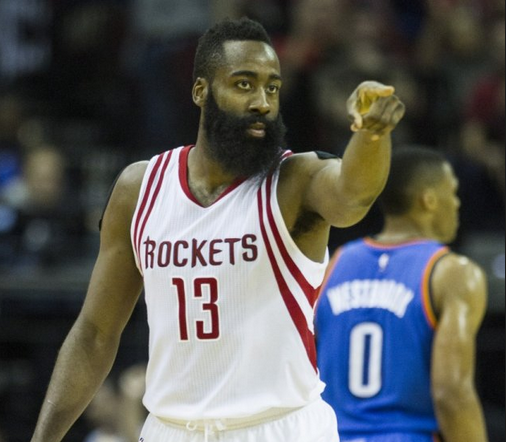 The real James Harden finally showed up Monday night, and not too surprisingly, the Houston Rockets at last registered a victory.

Harden dropped 37 points in the 110-105 win against the visiting OKC Thunder, holding off former teammates Kevin Durant and Russell Westbrook (who combined for 54 points in the loss.)

The Rockets had lost their first three games of the season, each by twenty points.

With the Rockets dragging their way back to Toyota Center after their third-consecutive 20-point loss to open the season, and facing a 15-point second-half deficit to the unbeaten Oklahoma City Thunder, the Rockets battled as if they could not take it any longer. […] From there, Harden rolled to a far, far greater game than he had in the season’s first three, and the Rockets broke through with a 110-105 win over the Thunder. Harden had 37 points, making as many field goals (12) as in the season’s first three games combined.

His final 3-pointer, with 2:17 left, gave the Rockets a seven-point lead, but the Rockets did not clinch the win until Dwight Howard nailed a pair of free throws with 5.7 seconds left.

While Harden continued his success against his former team, averaging more points against the Thunder than any opponent since he joined the Rockets, the Rockets also got Ty Lawson’s best game with his new team. Lawson had 14 points on 6 of 10 shooting, adding 11 assists. […] The Rockets had trailed by 15 in the third quarter when they drove themselves back into the game by scrambling defensively as they have not all season. They helped force 10 third-quarter turnovers, held the Thunder to 33 percent shooting and rallied to take their first lead into a fourth quarter this season.