WATCH: James Harden With a Monster Triple-Double vs Pistons 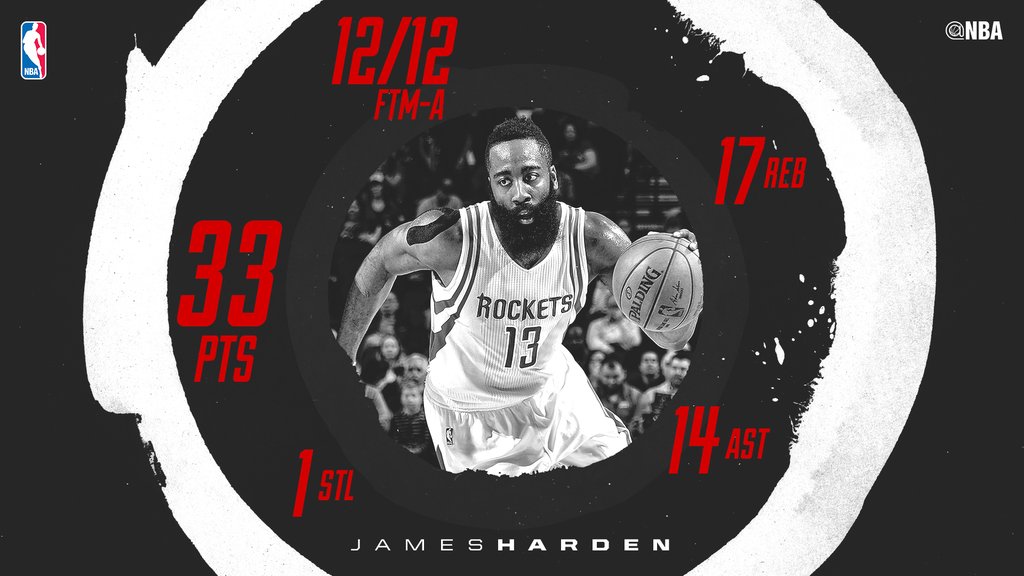 NBA history was made Wednesday night in Houston—the good kind, and also the type that makes you want to turn off the TV.

James Harden finished with 33 points, a career-high 17 rebounds and 14 assists for an incredible triple-double, and became the youngest player ever to hit 1,000 three-pointers.

… But despite the Rockets’ relentless hacking, the Detroit Pistons hung on for a 123-114 road win.

Less than one minute into Wednesday night’s game, Rockets center Dwight Howard turned his left ankle and slowly walked away. Unable to play basketball, he was at least allowed the option of not watching much of what would follow. […] For much of the night, the Rockets did not play basketball, either.

Yet with Drummond breaking (Wilt) Chamberlain’s record for missed free throws in a game, the game became more about a frustrating mix of a 34.5 percent foul shooter, an opponent playing without its center, and a team unable to defend well enough to do more than hope for missed free throws. […] “Trying to win the game,” Rockets interim coach J.B. Bickerstaff said of the second-half move to a full intentional-foul strategy. “It didn’t work. That’s it. That’s all I have to say about that.”

(Stan Van Gundy) did not blame Rockets interim coach J.B. Bickerstaff for trying it, reaching the extremes Spurs coach Gregg Popovich did at Toyota Center last season. He blamed the NBA for allowing it. […] “(NBA commissioner) Adam Silver and the league have decided that’s the way they want to play the game and that’s what they want people to watch,” Van Gundy said. “As long as the fans are OK with watching it, then they’re going to keep playing that way. At some point, the fans may say, ‘We’re not going to pay to watch this. We’re going to flip the channels.’ Our job is just coach the game within the rules. I don’t decide what it is people want to watch. That’s up to Adam and his people.”