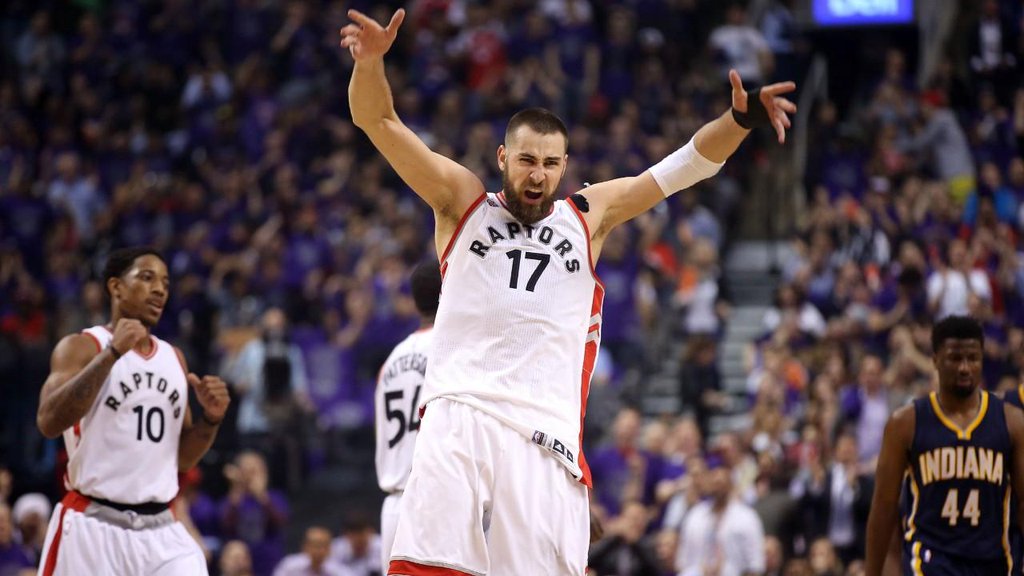 The Toronto Raptors faced a must-win situation Monday night in Game 2 of their first round Playoff matchup with the Indiana Pacers, and Jonas Valanciunas emerged as an unlikely hero.

The big fella pumped in a team-high 23 points and 15 rebounds, leading the Raptors to a 98-87 victory that tied up the series.

Paul George had another solid outing, finishing with 28 points.

Valanciunas had 23 points and 15 rebounds, Kyle Lowry had 18 points, nine assists and seven rebounds and Toronto beat the Indiana Pacers 98-87 on Monday night. That snapped their postseason losing streak at seven games and evened the series 1-1.

“We’ve all got to step up,” Valanciunas said. “It’s not an individual sport. Some nights are tough for Kyle, some nights it’s tough for DeMar, tough for me. Everybody has tough times, so everybody has got to pull for each other.”

Paul George scored 28 points and Monta Ellis had 15 for the Pacers, who host Game 3 on Thursday night. Before then, George said, the Pacers have to find a way to slow down Valanciunas. […] “He’s been huge, literally,” George said. “We’re doing a good job on Kyle and DeMar (DeRozan) but the third guy, Valanciunas, has stepped up. He’s who is causing us the problems right now and we’ve got to figure it out.”