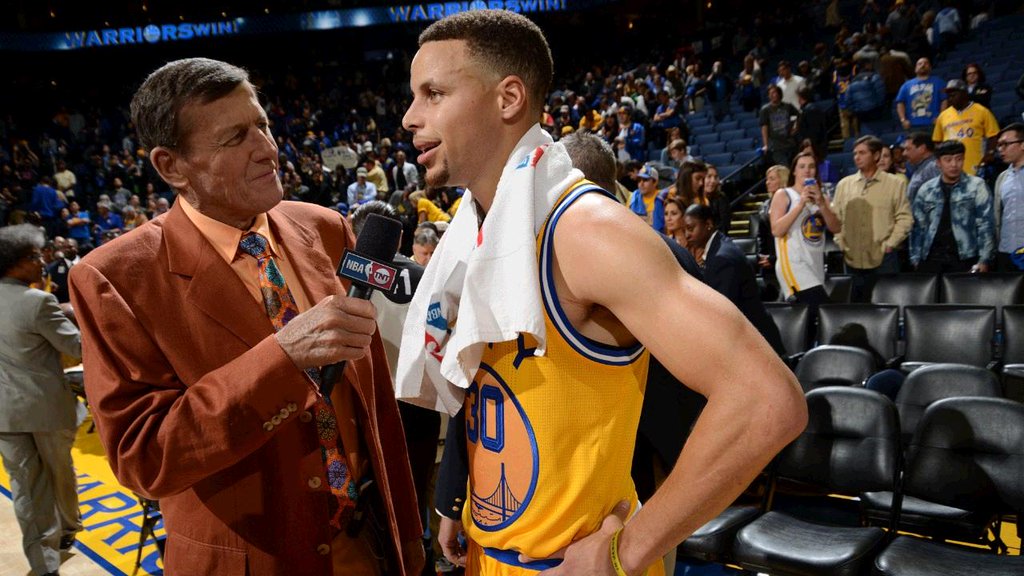 After helping lead the Golden State Warriors to their 67th win of the season Tuesday night, Stephen Curry chatted with Craig Sager, and told the legendary sideline reporter that the defending champions are drawing inspiration from his ongoing fight with cancer.

Couldn't have said it any better. #SagerStronghttps://t.co/ZiiuWUBwwv

Sager continues to work as he undergoes treatment for leukemia.

The Dubs took care of the visiting Washington Wizards 102-94 for their 54th straight regular-season home win and 36th consecutive this year.

Craig Sager has a blood clot behind his right ear that is affecting his hearing, and that’s just another annoyance he is accepting as he continues to work NBA games for Turner Sports with fervor despite his leukemia no longer being in remission.

“Nice to be here, that’s for sure,” said Sager, who stood up and saluted Steve Kerr as the Warriors coach discussed the one-of-a-kind broadcaster before the game. “I always get here over three hours before tip. It’s fun.” […] For the occasion of covering the defending NBA champions, Sager purchased a new outfit — wearing a “Golden Gate Bridge” orange sport coat and shirt with a bright tie that lists its 15 colors on the back. His special Nike sneakers say “Mr. Fancy” inside the tongue of the left shoe and “Suits” on the right one.

Oh, and for anyone wondering how he’s holding up emotionally, Sager said defiantly: “I think my demise has been prematurely reported. I think I’m going to kick this and make medical history and I really believe that.” […] The 64-year-old is set to work Thursday in Houston, where he receives his chemotherapy treatments — eight days of chemo coming soon starting the final week of the regular season and into the first week of the playoffs.