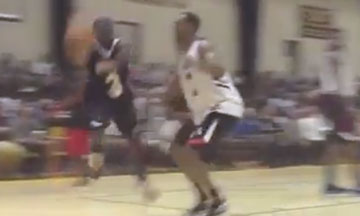 After Tuesday night’s game, I had the opportunity to interview the star of the show, Will Barton, and other players and organizers who made the Team Under Armour vs Team Baltimore’s Best event possible.

SLAM: What was the vision for tonight’s event, and do you feel that you accomplished what you had hoped for?

MP: Honestly, this came about because I was doing a photoshoot with the [Under Armour team]. We brought in all the guys for the shoot, which was actually the first time we’ve ever done that. So, the guys were going to be here for three days and I was talking to Brandon Jennings about two or three weeks ago when I told him about the photoshoot. Brandon was like, “Yo, why don’t we do a game?” So I said, Let’s do it, and made a couple phone calls to see if St. Francis [Academy] would be available, and then I talked to a few guys locally and mentioned the idea and they loved it.

The thing about Baltimore and the rich basketball tradition—this kind of makes sense. This turned out to be fabulous. We didn’t promote, which was very different from our tour. People in the community started talking about it and with this type of environment, this is great because people are passionate about basketball. This provides a great platform to showcase good basketball.

SLAM: Do the guys participating in the game take it seriously? We all see them smiling and having fun, but would you say they’re passionate about coming in here and getting a win?

MP: All of those guys are extremely competitive. I think in the beginning [of the game], they’re testing each other out and trotting up and down the court. But as they start showing each other up and the crowd is “oohing and aahing,” and none of them want to be on the other end of those “oohs and aahs,” naturally, they’re able to turn it on and get after it.

SLAM: Under Armour is now making a name for itself in the hoops world, can you talk about your aim and vision in joining the powerhouses of basketball?

MP: Everything is about the way Under Armour is built and the way we approach things. It’s about hard work, sacrifice, and if we can enter a category to help players be better, then that’s what we’re going to do. When you look at basketball as a global sport, we felt like it made sense for us based on who we are and what we bring to the table. We feel that we’re competing against ourselves. We feel like with us being a young company, we’ve made some big strides but we’re not done. We’re going to continue to put our heads down and make it happen.

SLAM: What does is say about guys like Kemba Walker, who could’ve signed with Jordan or Nike, but instead chose to join Under Armour?

MP: It says a lot. When you think about it, a lot of these kids grew up with other brands and it’s very natural or easy to go with a brand that you’re very familiar with. But it takes a certain type of individual to go with something that’s not necessarily popular or easy. Those are the type of players we want to be on our team. Kemba is an NCAA champion, and he chose us just as we chose him. It was a natural fit and great marriage.

SLAM: Can you talk about what it’s like to come back to your hometown and put on a show the way you did tonight, scoring 72 points?

WB: I was actually real nervous before the game because I wanted to put on a very good show for the [crowd] because I know they don’t get to see me play that often since my games aren’t regularly played out here. To come in here and put on a show like this, it’s real big for me.

SLAM: What is it like playing against Team Under Armour?

WB: It’s real big. I’m the newest member of that team. Plus they had all pros, so it was real big for me to come out and perform like that.

SLAM: What’s it like being an ambassador for Under Armour basketball?

WB: It’s real good. You know, they’re on the rise and I’m the first guy from Baltimore to sign with them. So I’m just trying to add my personality and my brand to their brand and hopefully we rise together.

SLAM: Can you talk about what it was like to play against Team Under Armour in front of your hometown crowd?

TW: It’s always good for me. Being from Baltimore and having the chance to come back and play since I play overseas and a lot of my friends and family can’t see me play so it’s always a blessing to play in front of them.

I love the crowd being on you. I like summer basketball. It’s a good way to work on your game and stuff like that so I love it.

SLAM: Can you talk about how Under Armour is on the rise and how they’ve come to adopt Baltimore hoops in a way?

TW: From what I know, Under Armour is all about the underdog and people grinding and stuff like that; Baltimore is that type of city. So, it’s like a perfect match.

SLAM: Can you talk about what it’s like to represent Baltimore and play against Team Under Armour?

SLAM: When you’re out there, you’re flashing your smile on every play, especially when you cross them up. What does that feel like?

AC: It feels real good. I’m just out there trying to have fun. If you were out there, you’d have fun like me too.

SLAM: What is it like being the generation that grows up with Under Armour?

AC: It’s amazing. For them to come from the ground and start to take over, it’s amazing.

SLAM: Can you share what it’s like to be one of the ambassadors for Under Amour hoops?

DJ: It’s great. Under Armour gave me a great opportunity so I’m blessed to be with these guys. Man, they kind of remind of the NBA guy—young and grinding to get to the top. So I’m happy to be with them.

DJ: Oh, it’s fun. I love playing against the hometown crowd in games like this. You know, competition might get a little heated, it’s always good though.