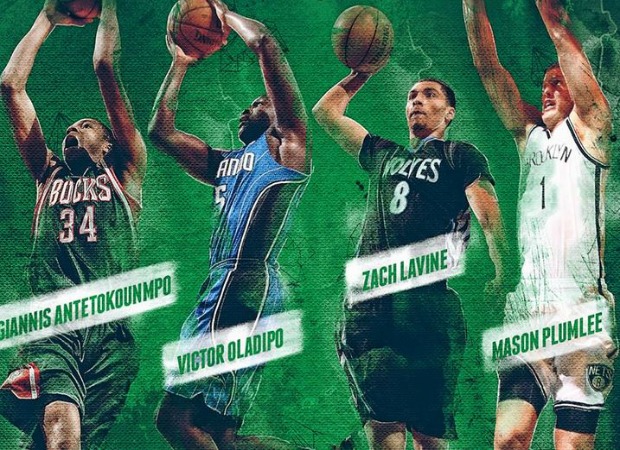 It may be a given at this point that everyone complains about the dunk contest, but the league is actually doing some things right in the run up to the 2015 version. The horrible team format is gone, only one year after the contest had three winners—Terrence Ross, Paul George and John Wall—and one moderately compelling dunk. Though Wall jumping over the Wizards’ mascot was impressive, it capped off yet another boring, drawn out competition.

Now there are only four dunkers, and it will only last for two rounds. Each player will get only three dunks, and the player with the highest combined score wins. Whereas last year actually featured some of the NBA’s best, this year’s roster is full of guys who have barely been in the League. Giannis Antetokounmpo, Victor Oladipo and Mason Plumlee are all in their second year, and high-flyer Zach LaVine is a rookie. But we are all going to watch anyway so we might as well be prepared. Let’s go to YouTube to see who we should have our eyes on on Saturday night.

The Greek Freak was born for the dunk contest. At 6-11 with arms that can stretch to each end of the baseline, he’ll be the fan favorite to take home whatever Sprite awards the winner. He’s been watching Larry Nance dunk videos for practice, and he’s got the perfect size and agility to channel the former Dunk Contest champ. What’s great about Giannis is that he’s so athletic that he doesn’t even need props to show off his insane hops. He should break out a Jordan-esque dunk from the free-throw line (or beyond) and possibly something like this.

Sure, most of LaVine’s dunks in the NBA have come when there are no defenders on his side of the court, but it’s what he did before he got to the NBA that makes him a heavy contender to win. He’s got a dunk contest mixtape that goes right up against Vince Carter’s from the 2003 dunk contest. We’ve got windmill dunks from the free-throw line, and through-the-legs pieces of brilliance that nearly caused a riot. There are no props, just unbelievable athleticism, and if he can pull out stuff like that on Saturday, it’s hard to see how he doesn’t win.

He may not have the hype that the previous two contestants have, but Oladipo did do a 360 dunk in a game earlier this year. As someone who has “always been good at jumping over people” he’s got to be considered a contender. Oladipo told us earlier this week that he’ll be breaking out the props, so there are some big surprises in store. He’s a big fan of the 360, and if he can break out a couple of those he’ll be in the mix.

He’s a big fan of the reverse dunks, and at nearly 7-feet tall it’s easy to see why. He doesn’t really have the athleticism of Giannis, but he does have the length. But wait! Before you count him out, check out the YouTube clip below. Taken when Plumlee was in high school, it shows him dunking three balls, and doing all kinds of Zach LaVine-level dunks. YouTube was basically created to show us video of Plumlee dunking three balls in a tiny North Carolina gym. Don’t count out the Plummer!