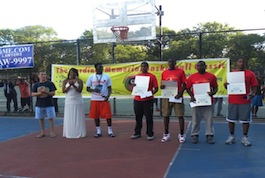 Growing up in New York City isn’t easy. In many cases, young children grow up in poverty and are not presented with many opportunities. One man, however, decided to reach out and give the youth in his Bronx neighborhood the opportunities that he did not receive, and opportunities that many children do not even think exist.

Dexter Gardiner was born and raised in the Bronx. He grew up playing basketball at St. James Park, which is where he now holds the annual Gardiner Memorial Basketball Classic. He is also the founder of the Gardiner Foundation, which he started back in 2006. Gardiner launched the foundation after a series of tragic events occurred: he lost his mother in January of that year, and then lost his sister to cancer about five months later. When his twin brother, Derrick, drove up from Mississippi for the memorial, he crashed in the Bronx River Parkway and died, along with his niece and two nephews.

It would have been easy for Gardiner to give up on everything after going through such a tragedy, but he decided to do the exact opposite. Gardiner began to give back to his community, to show the children of the neighborhood that there are options other than just the street life, and that giving up should never be an option. During the first two years of the tournament, Gardiner paid for it himself, but then a man by the name of Jeff Korek, a lawyer from Brooklyn who now resides in Scarsdale, saw what Gardiner was doing and wanted to support the cause.

Korek and Gardiner met while playing in a Westchester County basketball league together, and have been working together for many years now. Every year the event gets bigger and bigger. This year was the 9th annual tournament, and it was obvious that Gardiner and Korek’s work has brought this community together in so many ways. Aside from the actual tournament, Gardiner presents opportunities for children throughout the neighborhood to showcase their different talents, which include singing to dancing. He held a segment that allowed local kids to play in a 14-and-under game, while also hosting raffles and giveaways for the children in attendance, and even gave out new book bags and school supplies for the kids in the park. Four teenagers were presented with college scholarships to institutions such as the Borough of Manhattan Community College and University of Bridgeport. “My part is just a little part of teaching them life skills,” says Gardiner. Additionally, thanks to a relentless fundraising effort by Dexter and and Korek, there will be a new soccer field installed at St. James Park and all of its basketball courts will be renovated.

The quality of competition in the tournament was also as impressive as the other facets of the event. The games featured an array of talented streetballers who put on a show for the crowd, all while maintaining a high level of competitiveness. The championship game saw the Red Team, led by Korek, his oldest son and a few local neighborhood players, such as Bronx high school prospect Jaquan McKennon. They went up against the Yellow Team, whose squad included AND1 streetball legends  “The Pharmacist” and “High Octane.” Ultimately, it was the Yellow Team that came away victorious, with “The Pharmacist” taking home tournament MVP honors.

The main vision of Korek and Gardiner is simply to  better everyone around them, as well as send a positive message to the children. “Community service. If you’re going to high school, college, law school, medical school, whatever you’re going to do in life, you have to make community service a part of your life,” says Korek. He hopes the youth take note of what Gardiner and his family have done and follow in their path. Gardiner stressed to attendees that anything is possible for someone who has the proper work ethic, an advise he exemplifies every year with his tournament. He wants his Kingsbridge community to understand that basketball does not have to be a kid’s only way to success — even advising the youngsters in attendance to watch the Lenny Cooke documentary on multiple occasions during the weekend. When all is said and done, Gardiner simply wants to make sure that he has, “put [his] foot in to try and make this world a better world.” And that’s exactly what he did that weekend. 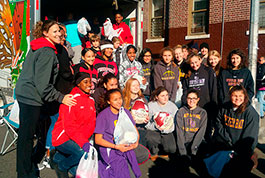