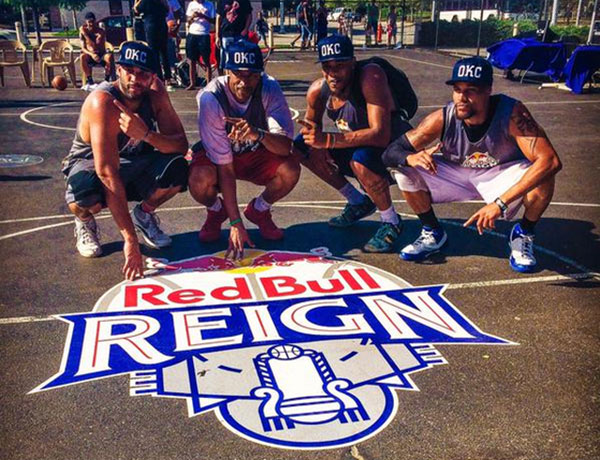 Thanks to the Red Bull Reign Tournament, Team Ball Hawgs, winner of the Oklahoma City qualifier, is hoping to help put everyone on notice come August 22 in Chicago.

While this is the first time the quartet has played together, they know one another through OKC’s basketball community and all share the common goal of wanting nothing but to win.

OKC baller Michael Malone is no stranger to Red Bull’s tournaments and he might have more motivation than anyone competing.

SLAM caught up with Malone to talk about his team, experience and motivation heading into the Reign Tournament.

SLAM: With this being your first time playing together, how did you meet to assemble the roster?

Michael Malone: We kind of all knew each other from basketball. Oklahoma City has a huge basketball community; if you play basketball, you know each other. The team that won the qualifier is a little different from the team I have now. I had to pick up two other people. I knew the guys from playing in basketball leagues, college and other different places. We all know each other pretty well. This is just the first time we’re playing in something together.

SLAM: Just how was it playing in the qualifying tournament, trying to not only see what your teammates like to do and where they like the ball, but also, you have these rules you have to adjust to?

MM: It was definitely an experience. I watched the videos of the tournament beforehand, so I could kind of understand the rules and had a good grasp of things coming in. It took us a while to realize we didn’t have to take quick shots, it’s more about scoring, it’s a quicker pace. It took a while to get some good chemistry going, but our goal in every game was to score 21 points, which was the max. So we would score that and the rest would take care of itself.

SLAM: What were your thoughts on the format because for a lot of guys, it’s their first time playing in a three-on-three tournament?

MM: The format was different, but it’s high pace, so you get a lot of games in with the pool play. We had two rounds of pool play, which was, I think, seven games in the first round, four in the second and then we went to the final four, so you get a lot of games in. That’s one part I liked about it; it wasn’t just single or double elimination. Everybody got to play everybody. It’s definitely different than any tournament I’ve ever played in.

SLAM: You have a long resume and are no stranger to Red Bull tournaments. Can you just tell me a little bit about your background?

MM: I played in high school and I was All-State. I went to the University of New Mexico and went there until I was a sophomore and transferred to the University of West Georgia, which is where I graduated from. I played in the ABA, CBA, USBL an a couple of places overseas; Morocco, Chile and went on a couple of tours here and there. I haven’t really played anywhere in the last five years, but I’ve been playing in Red Bull tournaments in that time. They had the King of the Rock Tournament, so I’ve won the qualifier in Oklahoma City three times, went over to Alcatraz twice and Taiwan once with Red Bull. I made it to the Final Four in Taiwan last year and lost by one point. Four years ago, I lost in the Finals in Alcatraz and I’ve lost in the Sweet 16 in the tournament.

SLAM: Most people outside of OKC wouldn’t view it as a basketball hotbed, but you guys have your culture just like anywhere else.

SLAM: What was your motive for entering the tournament with the guys you selected for the team?

MM: Oh, I’m playing to win. Chip on our shoulder or not, I’m going to win. I think we have a great chance. My motivation is last year, I made it to the Final Four of the King of the Rock Tournament and I got a little tired toward the end and I lost by one. I hate losing and I couldn’t stand losing that tournament last year. They didn’t have one this year, so the only option was the three-on-three. I’ve been to the Final Four twice now and have been right there and I haven’t been able to get over that hump. The losing is my motivation. I want to win it. My mind is set on winning this tournament, going to Brazil and representing.

SLAM: How ready are you to come to Chicago and trying to get over that hump?

MM: I’m excited about it, I think about it every day. It motivates me and gets me up for my runs every morning and my lift sessions. I got a little more information on the run down in Chicago. I thought it was going to be six or seven teams and I found out that it’s going to be 32 teams in Chicago, which is different than the King of the Rock, where the winner from each city goes to the Finals and we all play each other. This year, it’s the winners from different cities go to Chicago and we all play in a big pool there.

SLAM: What was your strategy during the tournament?

MM: In pool play, the strategy is to score 21 every time because that’s the max you can score and once you get out of pool play, it’s time to play real basketball; lockdown on defense, offense takes care of itself.

SLAM: You’re going to be playing against the best of the best, which you’re used to, but why do you think this time could be different for you in getting over the hump?

MM: I feel like we have a very strong team with a group of guys that really know how to play basketball. We’re going to go out there and just do what we’re good at, simple as that. I’m going to post up, take open shots. We have shooters and just overall smart players.