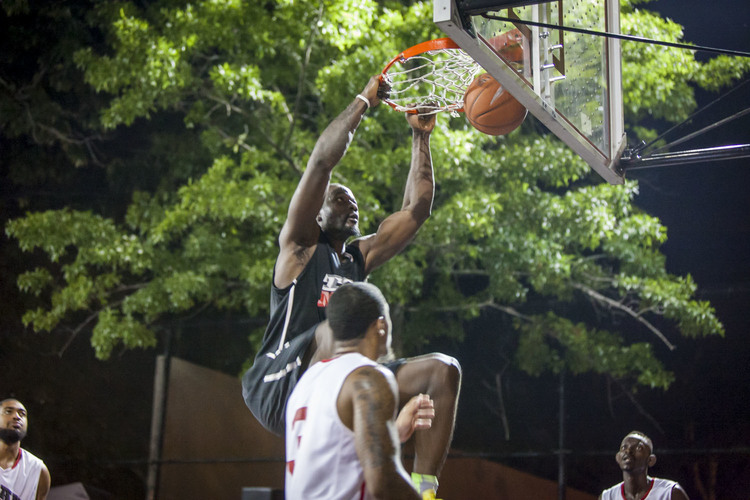 They came, they competed, and in a matter of hours, some of them will have conquered. With the conclusion of the third and final tryout this past Friday at Gersh Park in Brooklyn, the 20 Team NIKE finalists have rested their case as to why they deserve to represent NYC in the Tournament of Champions next month.

As it usually happens when a streetball game is played outdoors in New York, Friday night’s game was filled with aesthetic basketball pleasantries and insubordinate (in a good way) spectators. Under the lights, and in in front of the at-capacity crowd (peep the photos), Team NIKE Black defeated Team NIKE White 108-89 in the final exhibition of the summer.

By now, the player’s have shown what they can contribute to the team if they’re selected, and they can walk away knowing they’ve left it all on the court. Between Dyckman on Monday’s and Wednesday’s, Pro City on Tuesday’s and Thursday’s, and Watson, Gersh and HITS over the weekends, these guys have been playing five or six games every week for the past two months, and they can now take a break, if even for a few days.

For the decision makers, though, this is where it gets really hard. Which 10 guys do you pick? A lot of these players are eerily similar, if not in playing style than in value and impact. How do you discern which guard will best handle the ball under pressure, when there’s been pressure all summer and every candidate has both succeeded and, occasionally, failed? Do you take Kavon Lytch and leave off one of Justin Burrell/Jeff McDermott/Vern Goodridge, not because Kavon has outplayed these guys but because he brings a different style of play, or do you leave Kavon off because he hasn’t performed to the level you expected?

What about age and/or attendance? Do you take less-proven, but-young-and-dynamic Tu Holloway/Zamal Nixon/Jeremy Hazell, or stick with savvy veterans like Gary Erving and Kenny Satterfield. What about Curtis Kelly, who’s undoubtedly one of the best players and is an eligible finalist, but has been noticeably absent on the circuit? These are all questions that the decision makers will contemplate before announcing the final rosters sometime this week.

Who will be the final 10? Honestly, I’m not exactly sure. But after watching/following most of these guys throughout the summer, I do have some idea, and a decent intuition, as to who I think should make the team.

Louie McCroskey — McCroskey is a good slasher and finisher, but what sets him apart is his defensive ability. He’s the team’s best perimeter defender, and that’s simply too rare (in this setting) of a commodity to pass up. Although streetball is dominated by offense, the great teams always have at least one lock-down defender for when the time comes—and if we’ve learned anything this summer, it’s that games are often decided down the stretch, when defense is most valuable.

Kenny Satterfield — If I had to put money on one player making the final cut, it would be KSatt. As I noted last week, Satterfield is a streetball legend with NBA experience. Even at 32 years old, Grown Man Stuff aka Sirius Sattelite still contributes and at times can even take over. He’s the king of this streetball thing, and the value of his leadership alone cannot be understated.

Jeremy Hazell — Hazell is a lanky swingman with a streaky jumpshot. He can disappear for stretches, but when he’s on, he’s on. He can handle the ball under pressure, and can create separation and knock down jumpers. Hazell has played hard in every scrimmage, and when you watch him, you get a sense that he just belongs.

Gary Erving — Erving is lightning-quick with the ball, and has great ability to get into the lane and create. He showed impressive shooting ability on Friday, being able to knock down shots off the dribble and with defenders on his tail. He’s a better scorer than passer, but if you need a guard to break down his man 1-on-1, Erving is your guy.

Tu Holloway — This is a tough one for me, because I’m basing it off what I know as opposed to what I’ve seen. What I know: Holloway is a heck of a player, one who I first saw in high school and then in college, when he single-handedly carried Xavier through the NCAA tournament (and almost past a talented Perry Jones-led Baylor team) two years ago. What I’ve seen: Holloway has struggled to make an impact in some games this summer, getting frustrated by opposing guards and even looking disgruntled at times.

All in all, though, I don’t think Holloway’s struggles are indicative of his ability. So far, he seems to get placed on teams with guys who have trouble finishing, which means the defense usually just focuses on Tu. If he plays alongside other guys who can finish when he distributes, it will keep defenses on their toes, and that’s when Holloway can take over. If guys finish around him, Holloway can be one of the best playmakers on the circuit.

Kirk Williams — Williams is a great slasher with a nice frame (6-6, 210-pounds) and great motor. His length makes him a versatile defender, and he really understands how to run and finish alley-oops in transition. This is a player who can score 20 points in a game, all of which can be assisted. Between his athletic tools and his penchant to compete every night, Williams is an absolute joy to watch, and more importantly, a big-time weapon if he’s on your team.

Kavon Lytch — Going to repeat what I said last week, because not much has changed: Lytch has a wide, Glen Davis-type frame, and he gets all of his baskets in the painted area. Sound footwork has earned him the nickname “Happy Feet”, and he has a soft touch in the paint.

Quinton Hosley — At 6-9 and with athletic gifts, Hosley impacts the game in a variety of ways. He has the power to bully his man in the post, and the agility to face up and take his man off the dribble. Along with Vernon Goodridge, Hosley is one of the only “One-dribble” dunkers on the circuit—he can face up, take one-dribble, elevate and tear down the rim. Too good of a player to pass up.

Vernon Goodridge — Like I’ve said before, Goodridge has athleticism you can’t teach, with great mobility and bounce as well. He’s on another level in terms of physical ability, which translates to the court in every game he plays. The poster boy for Brooklyn hoops this summer, I can’t think of a scenario where Goodridge would be left off the final roster.

Geoff McDermott — McDermott can put the ball in the basket, and is another versatile scorer for Team NIKE. There are games when he reverses the ball and gets others involved, and there are times when he exploits his own matchups and goes to work. A veteran on the circuit, I think McDermott will get serious consideration for a roster spot.

Until the actual rosters are announced, I don’t want to delve into why I think some guys fell short. I’ll wait for the announcement, then I’ll break down why guys were cut (some of who could very well be on my “in” list). For now, these are six players who I think just fall short of the final 10:

In closing: My list includes five guards and five forwards, a healthy balance that I don’t think Nike will intentionally replicate. Sure, you need guys who can facilitate and guys who can score, guys with speed and guys with size, guys who dunk and guys who shoot, but from what I’ve seen, there is no exact formula to winning in streetball. While the talent is unquantifiable, most of the guards are streaky and often take ill-advised shots, and while all of the big-men have the physical tools to dominate, they don’t always put it together. This summer, we’ve seen a lot of good, a little bit of the bad, and our fair share of the ugly.

Going into the TOC, I think the winning formula is to have guys who compete hard, but most of all, play within themselves and as one cohesive unit. The key for Team NIKE is to play together, as one. With so many individual talents, if they can learn to concede a shot here, or make an extra pass there, the sky truly is the limit for this bunch.

Regardless of who is picked, Team NIKE New York is coming hard, fast and strong. But most of all, they should be ready. 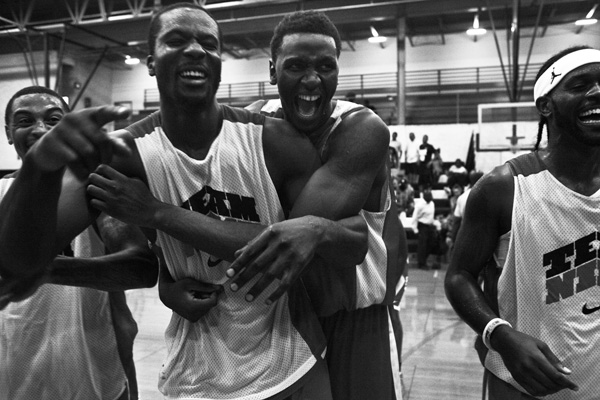