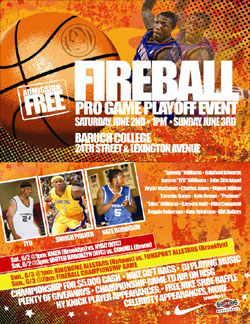 With the New York City summer basketball leagues not quite here yet, a league that many including Lakers guard Smush Parker, Knicks guard Nate Robinson, and former NBA center Jerome Williams, call the summer pre-season, has been going on for weeks now. The Nike sponsored Fireball Pro-Am at Baruch College had it’s playoffs and championship this past weekend. Our own Sammy Newman-Beck was on hand for the playoffs.

With DJ Khaled’s new song “We Takin Over” blasting through the loudspeakers, the 7th annual Fireball Playoffs sponsored by Nike and Shirts and Skins Athletic Wear commenced at Baruch College this past weekend. The pre-summer Pro-Am has been home to some of New York City’s best players both in and out of the NBA.

“This is like a time period where nothing’s really going on as far as basketball,” explains Ricky Rivers, organizer of the league. “All the other tournaments basically start in the summer so it’s kind of like a segue right before you get into the summertime.”

Fireball, known as the pre-season to New York’s many summer tournaments, continuously brings out the best talent in the city to compete over a two-month period for a $5,000 prize. The league originated in Brooklyn in 1999 and has recently started to gain city wide notoriety because of it’s highly competitive games and big name guest appearances. With Fireball’s move to Baruch Colleges’ first class gymnasium, the players now have a better place to play as an easier commute for the fans.

“I wanted to get a nice venue for it,” explains Rivers, “and give it that value that it deserves so we brought it to Baruch College in Manhattan”. In a section of Manhattan that usually hosts’ more working class citizens than NBA players, the Fireball tournament offers world class hoops without a heavy price tag.

With the league featuring such NBA players as Smush, Nate, Renaldo Balkman and other talents like The JYD and Omar Cook, the caliber of player has greatly improved. Every team in Fireball features either NBA players, former NBA players, guys playing overseas, most of which are New York City legends. With the move from Brooklyn to Manhattan, Rivers is hoping that the tournament will continue to attract better talent and establish a stronger fan base.

“We’ve been able to bring more guys out since we moved it up here,” said Rivers during halftime of the first playoff game, “so it’s been a good look for the players and for the organization”. It is also a good look for the fans as well. With free admission, fans are able to enjoy great pro level basketball games, a DJ with music, and not to mention free Nike sneaker give-a-ways.

As the first playoff game pit the XMEN—a well-storied New York City pro-am team–against the NYAC (New York Athletic Club) it was obvious to see that the players enjoyed the atmosphere as well. “ All my people’s are here,” said Smush Parker, who was running with the XMEN, “They run a good tournament and it’s fun for me to come back home after playing in the NBA and play in front of the family. It’s just exciting”.

Along with Smush, Fireball’s players are no stranger to tough competition. Playground stars like James “Speedy” Williams, Gordon Malone, Junie Sanders and Mike Campbell were also taking part in the action. Former LIU guard and division one leading scorer Charles Jones was on hand and said he views Fireball as a real warm-up for the summer.

“Everybody’s playing hard, and everybody’s trying to do their best,” states Jones, “It basically gives you a measuring stick of what the competition is gonna be in the summer”.

Jones who starred at LIU-Brooklyn in the late 90’s and has since played for the Chicago Bulls, the Los Angeles Clippers as well as the CBA, USBL, and South America, is the perfect example of the type of player Fireball features. Whether it’s Gordon Malone who starred at West Virginia and was drafted by the Minnesota Timberwolves and then spent years with the Harlem Globetrotters, or Mike Campbell who won the Nike sponsored battleground championship a couple years ago, the players here are dedicated to basketball and Fireball provides them the perfect opportunity to hone their skills before the summertime in a competitive atmosphere.

With a tournament that doesn’t require any admission to get in, Fireball is an event in which you can see some of the cities best talent, indulge in a great atmosphere, and experience the city at it’s finest. Fireball is a coming together of extraordinary players from a city of millions that could not be done in many other places.

“Ya know this is what brings everybody together out of Brooklyn, Queens, Staten Island, Manhattan, they all come in this tournament and get ready for the summer,” said Smush as he threw on his shorts and went to sit with his family in the crowd. An NBA player sitting with the crowd you ask? Only at Fireball.