I was sitting on my front steps in Queens, NY, at the end of a June day in 2013 when my phone started ringing. Bobbito Garcia—who I was working for as an intern—was on the other line, talking about an idea he had for a new basketball tournament. Bob, normally full of life and energy, was operating on another level of excitement.

He started to run through a big plan he had for renting out a park in the city, hopping on a microphone and bringing all of his friends out to play. But he didn’t want this to just be another tournament in New York, something that he, the city and I had already seen a million times. He wanted to bring the popular game of “21” to the full court, something nobody had ever done.

The sun was still out when I finished my call with Bob on that day. I went out to the park to play ball, not thinking much about his idea.

But now Full Court 21 has been running for five strong years and the tournament has realized its potential.

“When I started the tournament, my vision was to provide an opportunity for players of any locale to experience authentic New York City basketball in a way that they can’t get in other tournaments because of politics,” Garcia says.

“In my tournament, you get a shirt, you get an announcer, you get referees, you get scorekeepers and you get to play in the only tournament of its kind in the world where there’s no teammates, there’s no passing,” he continues. “Every player on the floor is defending whoever has possession of the basketball. It’s a unique tournament. I’m so happy I pulled it off.”

Not only did he pull it off—he continues to make it grow. FC21 has gone from New York City staples like Riverside Park to Booker T. Washington Park to its current location, the Goat Park, where Bob grew up hooping and learning from the legendary Earl Manigault. He’s got his friends and family around, either watching every week or helping to keep score or schedule out games. He’s also got men and women from around the world either coming to New York or playing FC21 in spots like Manila, Toronto and Tokyo. 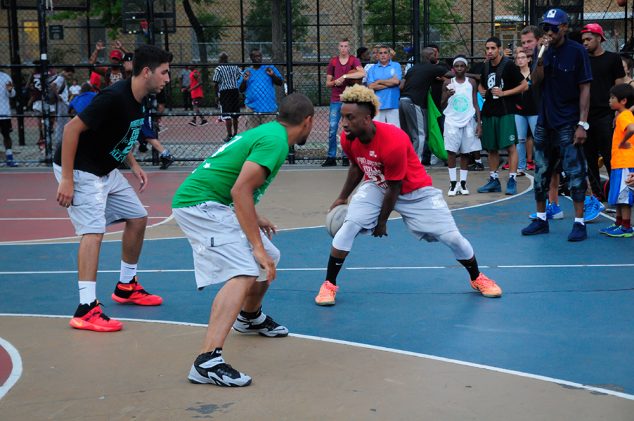 “It’s about getting people involved in a New York style game,” Bob says. “We did the tournament in Manila, the Philippines, and the organizer told me it was actually a hard sell because they love playing team basketball there. They’re not really about individual play. The guys that did sign up loved it. When people experience it, they just get hooked.”

Bob’s found a middle ground between competitive basketball and a welcoming and open environment. Like he promised back in 2013, he’s on the microphone with his guy Kurt, who helps out. The sidelines at the Goat are dotted with people closely watching the back-and-forth action. And while everyone is truly going to battle, it’s all love out there, from everyone involved.

Bob smiles when I bring up my earliest FC21 memory because he doesn’t remember it or doing a Q+A about it a few weeks later.

Bob says, “You know, the fact that I’m here and I’m able to contribute to my community where I grew up, it’s a dream and something I envisioned of doing when I was 14. Now, I’m 50 and I’m doing it. It’s beautiful.”

The fifth year of Bobbito Garcia’s FC21 Tournament is wrapping up on August 22. Players from Manila, Japan, Canada, Los Angeles and Philadelphia are coming out to the Goat Park in New York to play in the World Final. Photos courtesy of Instagram and Imani Vidal. Listen to Bobbito’s NPR podcast here.

Isaiah Thomas Set To Work Out With Warriors Next Week