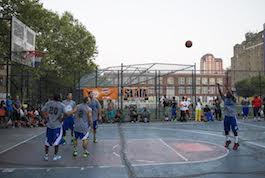 Bobbito Garcia’s recent SLAM rebuttal to ESPN’s egregious claim that “Playground Basketball Is Dying” was an incredible opus in defense of the culture. While Garcia’s piece proved that blacktop is far from dead, his Full Court 21™ concept, where multiple defenders guard whoever has the ball (think 1-on-5), displayed the game is actually evolving.

Powered by Kiswe, the Full Court 21™ Championship made history on August 26th, 2014 by being the first outdoor game to ever be streamed live to a worldwide audience where the user chooses from multiple camera angles. With the added ability to click for replays, the audience basically became their own TV producers.

As ill an atmosphere as Bobbito created with the Knicks and SLAM supporting plus famous friends like Vashtie Kola coming through, nothing was bigger than the actual championship games for both men and women.

“You’ve really got to be in shape,” Full Court 21™ scorekeeper Chiené Jones voiced. “It’s like Iron Man, but for b-ball.”

If anyone knows what it takes to win Full Court 21™, it’s Jones. Inspired by the action, the former NYU guard left the score table to suit up, qualified for the chip, then speed dribbled her way to becoming the first women’s division champ. 108th Street block favorite Monet Sealy aka “Pee-eeirn!” came close to tying in the final seconds, but “The Scorekeeper” scooped the bragging rights.

The men’s game was a dogfight.

The qualifiers from the five weeks of regular season action were David Melendez aka “The Puerto Rican Hulk,” Tyson Hartnett aka “Clark Gable,” Jeff Lieder aka “The Juicer,” “9-Finger Will” Hightower and defending champ Matt Thomas. Each made the final by sheer will, a lot of skill, and for some, a little strategy.

Thomas started off by splitting two defenders with a crossover so low he could’ve winked at the pavement. Lieder answered by hitting Melendez and Hartnett with a cross smoother than a coconut smoothie that had the crowd open. Thomas led with 11 points at half.

Just as the defending champion Thomas looked to repeat cleanly, Hartnett hustled his way to a quick 11 with under two minutes left. Thomas had the high with 15 at the 10-second mark, but Hartnett tied him again by hitting consecutive free throws just before the running time buzzer.

Under official Full Court 21™ rules, a tied game turns into a sudden death 3-point shootout to determine the winner. After Hartnett hit his NBA distance three, Thomas took a shot that bounced off the rim. 2014 came to a close with a new champ.

“I was living in Florida and saw highlights of last summer’s tournament,” said Hartnett, who has played pro in Ireland and Argentina. “I actually trained. I ran suicides, 17s and then I’d run for an hour just to get in shape. I looked forward to this all year, but I didn’t think I’d win. This is a glorious way to end the summer. Training pays off.”

When Bobbito heard of Hartnett’s regimen to prep for his tournament, he seemed unfazed. In fact, the director/announcer was adamant that there’s no other way.

“You have to train for this. It’s taxing to sprint both ways between possessions. The only time you get a break is when someone scores [and has to shoot free throws], but that’s not really a break because that means you’re down. There’s no way you can compete if you’re not prepared.”

Watch the archive of the finals at app.kiswe.com, and start running stairs now. Full Court 21™ will be coming to five international cities in 2015. Stay tuned at www.fullcourt21nyc.com and @fullcourt21nyc.