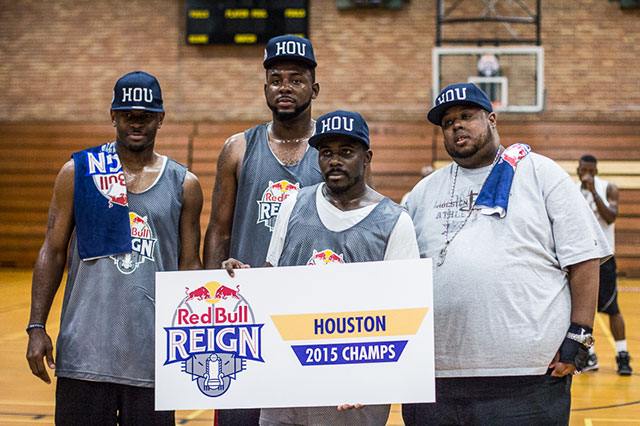 Never in any two-on-two or three-on-three tournament that I’ve watched, have I ever seen a coach.

Just imagine how disciplined Sidney Dean and Billy Hoyle would have been had they had some instruction. Not nearly as fun, but dammit, who’s stopping their streetball smarts coupled with the guidance of great coaching? Maybe Billy never losses Gloria.

The Houston winners of the Red Bull qualifier, Team Glory, are coached by John Cherry, who has known most of his players for most of his life.

Team Glory, which comes from the saying “To God be the Glory,” has been competing in pro-am leagues and whatever tournament they can throughout Houston since the team’s inception in 1998 and have won their fair share of tournaments, all with Cherry calling the shots.

With an emphasis on aggressiveness on both sides of the ball, along with their experience of playing together, Glory is definitely a team to look out for once the Red Bull Reign finals begin on August 22.

SLAM caught up with Cherry to discuss his coaching, the qualifying tournament and learning to adjust to the tournament rules.

SLAM: You rarely see actual coaching in these tournaments. How did you go about becoming the coach for these guys?

Coach John Cherry: I’ve been coaching Team Glory for 17 years. My friends that I grew up with were all on teams. I can hoop, but I’m a big dude, so I could never get out there like that. I kept me and my friends together and we’ve played in midnight leagues, pro-ams and we win everything because we’ve stayed together and I’ve been the coach throughout.

I’ve had a bunch of different players on my team because they will come up to me and say, “I want to play for you!” Teams in pro-ams will have a team without a coach and they have a hard time playing with each other because of the subbing and they end up not getting along. When they see us, they see that we don’t argue about nothing. We sub, play together and play defense. When the Red Bull Tournament came, someone told me about it and I said I would put some players in and I told him then, We’re going to win. [Laughs]

SLAM: Coaching at any level is difficult because of the managing of egos, playing times and keeping those who aren’t involved engaged. How do you manage that on the pro-am level, where guys just want to show what they can do and there’s very little defense played normally?

CC: You’re right; there’s very little defense usually, but these are all people that I know. They’re not about to trip or go off on me because if you aren’t playing defense, you’re going to be on the sidelines. Even though we’re all the same age, you’re going to respect me as you would any other coach. My thing is defense. We can score easily, but defense is the key.

SLAM: How do you go about selecting a roster in a three-on-three setting because you never know what kind of team you can be up against in these tournaments?

CC: It’s almost the same as the positions you would have when it’s five guys, it’s all about the position. You have to have a point guard, a big man and a small forward. The one sub, he can either be a guard or a forward. The big man is going to stay out there, unless he is in foul trouble. That’s the way you’re supposed to look at. We had a strategy. Every team that played against us were shooting nothing but threes. Take the ball to the hole and score. If they foul you, go to the free-throw line. I like my team to be aggressive. Don’t be scared to get fouled. Go to the hole and get that foul.

SLAM: With the rules being what they are, was it hard to adjust at first?

CC: It was hard the first two games because we were confused at first. My big man, he would get the rebound and take it out and they would call traveling. I was like, What’s going on? You have to get the rebound and pass it out and then you have to go behind the three-point line. Once we got adjusted to all of that, it was easy because we were watching the other teams not take the ball all the way back, they go in for their layup and the referees would reward us possession. Then, once we found out it’s about how many points you score and not your wins and losses – it was one team that lost all of their games and almost made it to the championship—it was even easier. We only lost one game and that was by default because I think the table messed up the points and gave the opposing team out points. We would have went undefeated.

SLAM: How did the overall qualifier go for you guys? It seems like the experience your guys have in playing with each other was a big advantage.

CC: That morning of that day, two of my players backed out, but I have so many people on my roster that I called two players that quick and they came up there. They were like, “Let’s win this thing.” One of them stayed right across the street. It was hard at first because we’re deciding who to call and we call Michael and Darmarcus. We had to plug in two new players that morning. I had two other players, who I knew we were guaranteed to win with, but once the change was made, I knew we would win with the new two also.

SLAM: I heard that the team wanted to give a portion of their winnings to charity, which is almost unheard of with these kind of tournaments. Is this something you guys had planned on or something that came on later due to whatever circumstance?

CC: My players are the ones who decided they wanted to donate to charity. I was like, I’m the charity, give it to me [laughs]. I was just being funny, but I was surprised they said that too because how many hoopers are thinking that. They’re church going, but you don’t need the money?

SLAM: Looking ahead to Chicago on August 22, are you just as confident about your chances against the field you’ll be seeing?

CC: In Houston, it was 24 teams. Some teams were bigger than us, taller than us, but that didn’t mean anything. All you have to do is just play basketball. No arguing, play together and we’ll win this thing.