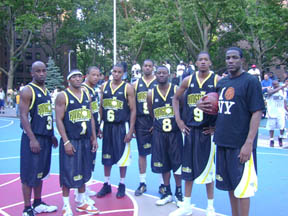 While the rumors of handgun violence are slightly exaggerated, Harlem’s Kingdome Classic is definitely experiencing homicidal tendencies. The Kingdome Classic is Harlem’s oldest tournament and arguably the most popular pro-am on the New York City circuit this summer. Damon Dash has taken over the event and cross-promoted it in ads and apparel from his line of PRO-Keds this year, giving the games a boost in exposure. Amid mild controversy and hellish heat, the tournament continues on to entertain the Harlem residents and help the city’s elite ballers keep their games tight.

“There are some politics going on right now, they’re trying to stop the games,” says Corie Underwood, a journeyman big man from Queens running with Team K1X. “But this is the best tournament running right now. The NBA guys know it. Everyone knows about it, the word gets around the city somehow.”

On the first night of the tournament there was a shooting on Lenox Avenue that some believed was related to one of the games played earlier that night, the tournament’s kickoff. However several players and fans say the shooting happened far from the tournament and way after everyone had gone home. While many still speculate, the facts aren’t 100 percent apparent.

The one concrete truth about the Kingdome Classic is that it is entertaining. “I come here to be with my family and watch the games,” says David Valez a 14-year-old King Tower’s resident. “I like to see guys dunking on each other, breaking their ankles and stuff.”

Aside from the alleged violence, the majority of the shooting is being done on the courts. It would be hard to do a story about Kingdome this summer without mentioning the tournament’s most popular player.

Corey “Homicide” Williams doesn’t play in the NBA. Aside from that, he’s the most well-known player to come down to Kingdome this summer. Even with cameos from Damon Dash and rumors that Ron Artest and David Lee would be uptown this summer, Homicide (who SLAM readers may remember from last year’s issue of Streetball) is by far the star of the league. After picking up a D-League title with the Dakota Wizards this spring, he is once again poised to attempt to make an NBA roster.

“I like playing out here just for the simple fact that I can do pretty much what I want,” says Homicide, 29, and now working in the Vegas Summer League with the Warriors. “It’s just that simple for me.”

And he’s not just saying that. Others are taking notice of Homicide, who is on the top of his game. K1X signed him to an endorsement deal and he’s working towards releasing his own shoe, the 187. The large crowds in attendance on the cement bleachers go crazy each time Homicide touches the ball. The day after we speek in Harlem, Homicide played in another tournament and gave Boston Celtics guard Allan Ray 25 points in the first half before Ray got dressed and left at halftime. Two days later, Homicide joined the Warriors in Las Vegas.

“Nobody can guard him. They try and guard him and nobody can get near him. The number-one, best player in streetball right now is Homicide” says “Taz,” Kingdome’s resident courtside commentator. “He’s got a championship in the NBDL. What does he have to do to get to the next level? He should be in the NBA right now. I call him ‘The Funeral’ because he’s always killing somebody in the park. Today he had 30 and he took the day off.”

While it’s understandable that residents and community leaders would like the Kingdome Classic officials to run a cleaner show, it’s hard to see what’s not to like. People come, police patrol, games are played and everyone is home before dark. While it would be unfortunate if there were a link between the tournament and tragic shootings on Lenox Avenue, there doesn’t appear to be one. Players like Homicide advancing from the playgrounds to the fringes of the NBA only shows evidence that the only shooting going on at Kingdome is of a positive nature.

“There are a lot of other things that go on here, too many other things, that’s why they’re trying to put a stop to these games,” says Homicide, who had his mother in attendance. “Somebody got shot, they said (it was people who) was coming out of here, but at the end of the day, this is some of the best basketball in New York.”