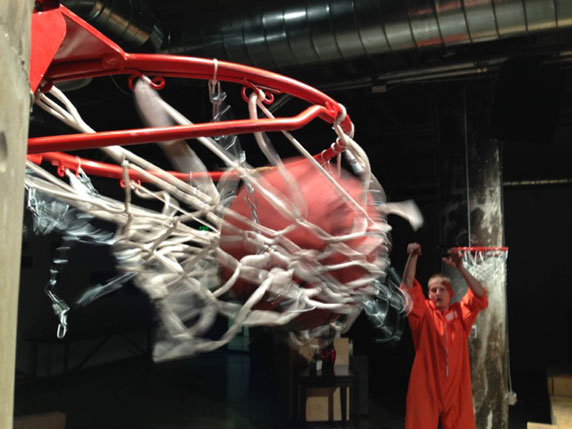 “When life gets out of control, Hoops can be the key to finding humanity.”

Gustav Gauntlett can’t dunk, but he can shoot, pass, write and act. All of what he can—and cannot do—is skillfully featured in his new basketball-infused one-man show: Hoops.

Hoops is the story of five different characters: A homeless man living on the court, a gay white son of a black cowboy in Omaha, an inmate in Pelican Bay Prison, a Mexican mother living in East Harlem, and a soldier in Afghanistan. Basketball is the text, subtext and thematic thread connecting each character in this 75-minute play. Written with straightforwardness, sans sentimentality, Hoops provides a functioning disconnect between the protagonists’ heroic possibilities and their imperfect realities. This resignation is perhaps most amplified through Reggie Williams, the homeless man, as we witness the point shaving events that have steered him from blue chip recruit to trashcan gleaner.

Hoops was written over a two-year span while Gustav was a regular at pick up games at Sara D. Roosevelt Park in Manhattan’s lower east side. “You meet so many interesting people on the New York blacktop. In my mind, I found myself trying to imagine their backstories, and used those thoughts as the antecedent to fully develop the characters.”

Performed with the rhythm of Basketball and flow of a sweeping fast break, Gauntlett’s physical precision and theatrical intimacy is striking. Basketball is both a private solitary game but also a group collective. Hoops A 1-Man Show invites humor but is not comedy, supplies pathos but lacks melancholy. The show focuses on the inner world of the characters in relationship to the cleanly constructed basketball-marinated vignettes. It is during these exposed snapshots where Gustav’s referendum on these characters is intuitively drawn (not just the emotional moments but the transformational ones) as they look back at their past while facing an unsure future. The writing doesn’t attempt to legislate feelings, but it does offer insight and challenges the audience to be athletic of the mind and expansive in thought. Basketball in Hoops, functions as a socio-theatrical force to examine some critical individual issues.

In this spirit of societal reflection, Walt Chambers, the Pelican Bay inmate, is an affluent suburban kid whose strongest form of prison currency are his point guard skills. These talents serve him well by keeping him safe. His foul shot ritual verbal mantra, “Focus…no fear” is linguistic evidence of the everyday uncertainty of incarcerated life wherein basketball offers momentary relief and occasional exaltation.

Later in the scene, Chambers adds, “With 10 seconds left in a championship game, the team down by one with the ball, is the single most exhilarating emotional experience.” Sports and people are far too complicated to be boiled down to simple equations, but Gustav Gautlett does provide transparency and spontaneity as the play ends differently, literally depending upon how the ball bounces.

Hoops premiered in San Francisco this past September, and reads as a kind of Vagina Monologues for a hip-hop laced streetball-playing consortium. Using a similar aesthetic structuration to Eve Ensler’s seminal piece of work, it is Gustav’s intent to expand on these stories in different locations to include neighborhood-specific basketball narratives globally. “The blacktop has no boundaries,” says Gauntlett.

In its current evolution, the many thematic textures of Hoops reach an amalgamation from this particular production’s multi-sequential video, music, and economically injected voice-overs; providing a raw and powerful hardwood theatrical offering.