Links: Back On The Block 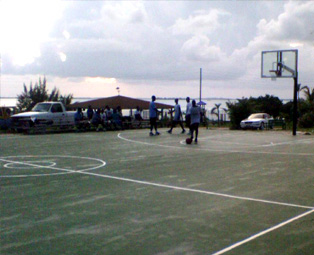 As Sam preps to head for warmer a climate next week, I returned from my own vaca tonight. Sure, I’ve been traveling a lot lately, but I don’t think Cleveland and San Antonio qualify as vacation hot spots. So I loaded up the truck (well, a couple of airplanes and a few water taxis) and I hit the Bahamas for a week.

Even though I went into full-on beach mode (wore the same shirt for four days in a row and didn’t even pack any socks), I ended up spending the bulk of my time working on a book proposal I have due on Monday. If my wonderful agent can trick some book company into buying it, you guys will hear all about it. If she can’t…well, I’m still writing here every day.

I spent the week on a little island called Harbour Island, one of the oldest settlements in the Caribbean, filled with old houses and quaint little hotels. The whole island is just three miles long — here’s a map, and it’s actually a pretty detailed map, even though it doesn’t seem packed with stuff. That’s because the island isn’t packed with stuff. There’s very few people there, and everyone there gets around on golf carts.

I stayed at Rock House, a beautiful hotel about 100 yards from the harbor. I spent my mornings writing, then went down to the dock for some fresh conch or grouper for lunch, then either hit the beach or the pool for a while, then went back to write, then spent the evenings self-medicating with as many Goombay Smash drinks as they could pour up. Also spent one long, hot afternoon fishing with a local guy named Stuart who was great.

Anyway, one night I was parked at the bar and the bartender, a local woman named Joanne, started asking me about what I do for a living, etc. I told her I was a sportswriter, then moved on to my next drink.

The next day Joanne told me she’d spoken to her nephew and there was going to be a local basketball game the next night, and that I should totally check it out. Her nephew was tall, she said, and his name was Samson. I’d seen the basketball court and told her I’d definitely go.

So, on the night of the Fourth of July, just as the sun was setting over the bay between Eleuthera and Harbour Island, I found a seat on the wooden bleachers courtside at the outdoor basketball court. The water was sparkling in the background. There were no other fans there, just a couple of locals sitting on each bench and a few kids who’d run out on the cement court during any stoppages in play and fire up threes. Someone turned on a stereo somewhere, so reggae music bumped throughout the night. Occasionally a skinny dog would run across the court.

The teams were the Rockets and the Eagles. They both wore reversable practice jerseys and, to make Sheed proud, both teams played hard. Guys were diving on the cement, taking charges, running full blast. Neither team was particularly amazing or anything, and none of the guys were playing for scouts or spots on summer league teams, but this was basketball as it should be — played simply because you want to win more than the other guys.

As it turned out, Samson was really good. I talked to him after the game and found out he’s still 16 and he’s hoping to go to a prep school in Carolina this fall (Samson Cleary — remember the name). Samson’s team won, I think it was 66-64. I don’t know which guy scored the most points or who led the game in assists, but I do know that on Independence Day, it seemed perfect to sit back and sip a frozen drink and watch guys playing basketball solely for the love of the game.

Anyway, I’m back now and will be doing some heavy lifting here next week while Sam’s gone. We’ve got something cool in the works that’s going to debut next week here on SLAMonline, but you’ll see that when it happens. When my plane landed in NYC this afternoon, I turned on my Sidekick and got an email from a friend that read, “Darko to the Hawks?” Man, talk about a rude awakening. More on that tomorrow…