With the 2013 launch of its three-pronged Pro-Am, Parks and School program, Nike’s Chi-League is providing safe summer environments for Windy City youth.

I know people wouldn’t usually rap this/but I got the facts to back this/just last year Chicago had over 600 caskets/man, killing some wack shit

Kanye West’s bars on “Everything I Am,” from 2007, still ring true and have so for decades, though it’s only begun to draw national attention in recent years. Despite numerous “stop the violence” campaigns around Chicago, nothing has proven better, in the past and present, at quelling the tension than a ball and a rim.

“Ben Wilson was killed in late November 1984. He was the 669th person killed,” says long-time Chicagoan and former SLAM editor/writer Scoop Jackson. “We had [415 in 2013]. He was 669 in 1984 and the year finished up with [741]! I hate to say it, but this is the culture of Chicago. It’s getting a lot more media attention. I don’t wanna say this is the norm, but this isn’t really out of control. But if you go back, there was no violence at the Chicago St. University [Pro-Am] in the ’80s, nothing jumped off. The city stopped for that.”

Jump forward 30 years. Welcome to the Nike Chi-League, entering its second year after a strong inaugural run in 2013. Looking to increase its presence in the city, provide some optimism to a city that needs it and showcase the talent in the new metropolitan mecca for hoops, Nike started the Chi-League and it quickly became the city’s premier summer Pro-Am league.

“I started paying attention to the violence and became really impacted by what was going on and interested in the fact that it was focused in the South and West Sides, where basketball is so important,” says Nike rep Jill Rankin, one of Nike’s Senior Brand Directors and a point person for the Chi-League. “Those are the neighborhoods where the best basketball players in the country are coming from. Players like Anthony Davis, Jahlil [Okafor], Paul White, Cliff [Alexander], Jabari [Parker]. If those neighborhoods are impacted by violence, then what does that mean for the future?

“I learned our brand is really important in those communities when we started reaching to not just kids, but community leaders,” Rankin continues. “We’re a sports company, and the problems have to do with gangs and guns, and I started to think that we–Nike–needed to do something, because our brand is already important to these kids. We’re doing business in Chicago and have a team on the ground, and I started to feel like we had the responsibility to do something and see if we could make a difference.”

After deciding that they definitely wanted to get involved in the area, Nike personnel spoke to Chicago-based community leaders. As conversations evolved, one thing became clear: Chicago didn’t need Nike’s money—the city needed the brand’s help in making things happen in the community on a grassroots level.

“We started having conversations about what made the summer league special back in the day,” says Jackson. “How could they do it? How could they bring energy and excitement back? Not just who played, but who was playing against who? That was a lot of my conversation with them, trying to explain to them not being from here what basketball really meant. In the city, it was just as, if not more, important than the NBA and college seasons. Even when DePaul was great, and Illinois was great, and the Bulls were starting to make their run, it was still about summer.”

And so the Chi-League was born last April. And while the name isn’t a catch-all, Nike’s outreach is. After all, Chi-League Pro-Am—hosted every Saturday at Whitney Young HS, alma mater to First Lady Michele Obama among others—is only one part of a three-part initiative. Parts two and three, Chi-League School and Chi-League Parks, give kids opportunities to reach their full potential on and off the court.

In its inaugural season, Chi-League was successful on all three tiers.

“We were hoping when we kicked off that we could get a couple hundred people, and maybe by the eighth week we’d get 1,000,” Rankin says of the Pro-Am, which featured regular appearances from pros like Shawn Marion and Will Bynum, and local favorites like Osiris Eldrige and Tony Bennett. “Of course, in Chicago, apparently, if you say ‘basketball,’ people will follow and show up. Every weekend, we had 5,000 people.”

Jackson gave the league— attendance is free to the public—his stamp of approval: “I thought it was a step that [the people in Chicago] weren’t prepared for, the overall enjoyment and energy the Chi-League brought back. You saw Stefhon Hannah really use last summer as a stage to do his thing and that resonated throughout the city because you started to hear buzz: ‘Oh, so-and-so is over there at the Chi-League.’ I felt that, and I hadn’t felt that in a while. That was a good feel. 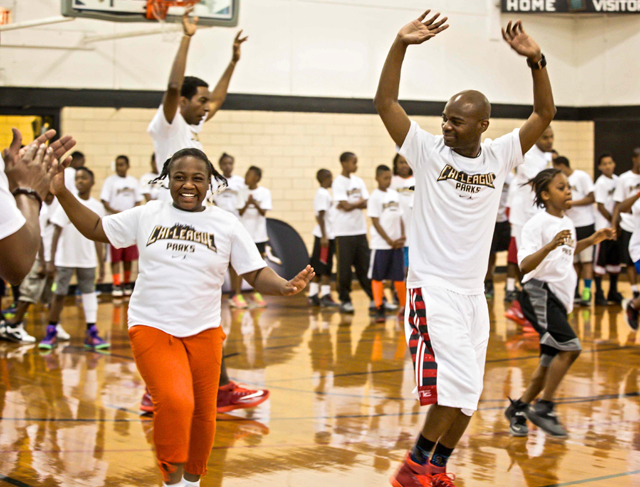 “The unexpected was the camps that went on beyond just putting on a showcase over the weekend,” he continues. “I think that caught a lot of people by surprise in a good way. From a brand standpoint, it went over well because Nike didn’t have to do this. They could have just recreated the summer league and stopped there. But for them to go out and provide workshops and things like that, I think that took a lot of people by surprise. I talked to some kids and it made them feel like somebody cared.”

Chi-League School and Chi-League Parks, also free and on Saturdays, reached families all over the city. Chi-League School, “was about skill development, like we do with our Elite Youth teams; it was literally just a customized version of that program,” says Rankin. “The school idea was to take 100 kids that were, like, the sixth to 10th men on their team and give them a really intense development opportunity. The idea was that if you’re really good, you’re gone [for AAU], but everybody else has nowhere to go.”

While the Pro-Am was about inspiring and showcasing the best basketball in the city, Chi-League Parks was about touching the youth. Each week, at rotating locations, Nike, in conjunction with the Chicago Park District, put on free clinics at neighborhood parks on the South and West Sides of the city. The programs were such a hit in 2013 that they were extended through the end of the year. Bears athletes, Nike reps and others were on hand each week to provide some additional guidance and inspiration. This year, they are set to double their reach to 10,000 kids.

Tim O’Connell, the Assistant Director of Recreation for Chicago’s Park District, was one of the appreciative administrator’s on the city side of things. “We picked the locations for Chi-League Parks with Nike. Working with them from the beginning, literally planning out how many hoops are in the gym, how many kids can we accommodate, what times are best,” O’Connell says. “We were happy to partner with them to provide [Chi-League Parks] at no cost to communities and give positive opportunities for young people from the ages of 9-18. When they brought Jabari Parker, and even when they brought a retired athlete, the kids really did appreciate getting words of wisdom from someone who pretty much would always say, ‘I was you, I was in your spot.’ It was well-received and it was well-thought out.”

Adds Chicago Mayor Rahm Emanuel: “Chi-League Parks was a tremendous success in 2013 and serves as an example of how business, communities and government can come together to support Chicago’s youth while also creating area jobs. It’s important that our kids have access to safe activities and positive role models in the summer, and I commend Nike for doubling down on this successful program to reach even more young people.”

All three programs— Chi- League Pro-Am, Chi-League School and Chi-League Parks—have received immense positive feedback and expanded accordingly for 2014. Chi League Parks began May 31, while the Pro-Am and School opened up on June 14.

“I appreciate it and I think it did do something on a singular level,” Jackson says of Chi-League. “It was a breath of fresh air to see a bunch of folks from all over the city get together and not have anything jump off. Chi-League is great and a getaway for a lot of people.”

Rankin reminisced on the Pro-Am’s 2013 finale as a great sign of what’s to come: “When Chi-League ended, people wouldn’t leave. We were trying to clean the gym and they would not leave. Some of the people came down and the sentiment was they were afraid we weren’t going to come back and do it again. I think that’s what Chicago kids–and kids in any big city–kind of expect, is for brands to come in and do something once and leave. And that’s not our intent.”