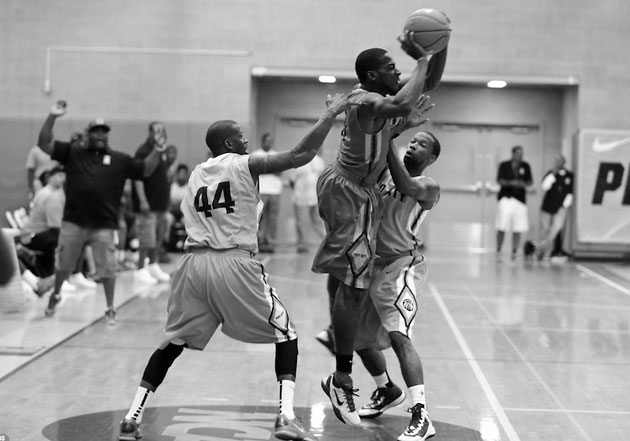 On Tuesday, the Nike Pro City slate was, if nothing else, fun to be a part of. Although both games were pretty much decided in the first half, there were still a handful of great players who, as you might expect, made some great plays. And as always, the gym was packed with civil fans and less-civil hecklers, who influence the intensity on the court.

On Wednesday, the summer got serious (word to Nike) with a classic ear-deafening, under-the-lights game at Dyckman between Rosedale and Skull Gang.

A quick reminder before the recaps: We’re a little over a month away from the formal announcement of the Team NIKE New York squad. Players from all summer tournaments are eligible to be chosen, and with Nike monitoring every league, guys are continuing to rise to the challenge and make their name known. As the summer goes on, the tiers will become more transparent, and the pieces will begin to fall into place.

When I first walked into the gym at Baruch College, I quickly scoped out the scene. As my eyes were traversing the fluid basketball on the court, a massive player on the floor for Primetime caught my eye. I thought to myself, Wow, that guy looks like Andray Blatche.

A few seconds later, that same massive player received the inbound, dribbled between his legs on his way up the court, executed a filthy (for his size) left-to-right crossover and fired from around 29 feet. Poofie.

“NBA with the three!” the announcer emphatically said. “Andray Blatche out here doing his thing, y’all.”

It was, in fact, Brooklyn Nets center Andray Blatche.

In a game that was never really close, Primetime cruised to a 125-109 victory Tuesday at Pro City. In addition to Blatche’s monster game, Primetime got great performances from Loyd Clinton (31 points and 5 rebounds) and Dwight Burke (22 points and 11 rebounds on 50 percent shooting). While the game was competitive for a decent portion, the difference in the game was in second-chance points (Primetime’s 26 to BAB’s 9) and points off turnovers (38 to 17), which counteracted any attempt of a breakthrough run from BAB.

“It was good to come out with a win,” Blatche said after the game. “But I’m just out here in Brooklyn and I heard this was a good league, so I wanted to come out and get some run. I had a great time competing against some good players.”

There were a number of great athletes on display—from former UConn big-man Ater Majok to Burke to Hosley to Rashad Bishop—but Blatche was clearly a notch ahead of his peers, in both skill, size and feel. While you inherently know NBA players are on another level, it was still pretty cool to see the discrepancy between pro ballers in Europe and pro ballers in the League. While the international-playing guys would dunk in transition or on put-backs, they don’t usually showcase a total package, in terms of meshing all their skills together to making everything second nature. Blatche—at his enormous size—was facing up his man and going to work offensively. There was one play where he received the ball on the right elbow, sized up his defender, took two hard dribbles right and finished with a reverse And-1 dunk on the left side. He just made it look so easy that it made you sit back and say, “Oh, word. That’s why he’s in the L.”

After the game, I asked Blatche his thoughts on next season and on the prospect of playing for new head coach Jason Kidd.

“Our mindset coming in is to win a Championship, plain and simple,” Blatche said. “We have the pieces, we have the players, we have the coaching staff. I talked to Jason Kidd, and I think he’s going to be a good coach for us, so for me, I have to come in healthy and ready to play. I’m real excited.”

The night slate of Nike Pro City was similar to the first game, except the losing team was more lackadaisical, and there was no NBA player to compensate for a lack of overall competitiveness. Sigh.

Sean Bell led throughout the game—as in, every single minute, from start to finish. Seven players scored in double figures for Sean Bell, which if you take a moment to ponder, is kind of crazy.

“We knew they were a good team,” Holloway said after the game. “They have Kenny Satterfield, Jeremy Hazell and guys like that, so you know it takes a lot to beat them. We had pros backing up pros backing up pros, and it was just a total team effort.”

On TNP’s end, frankly, it was just an uninspiring performance from a normally reliable group. Holloway is right—KSatt and Jeremy Hazell are great players—but what are you supposed to do when you’re best players can’t play…because they’re not even at the gym.

Satterfield, Hazell and Al Shep all arrived late to the game—look, I’m not placing ANY blame here, because they could have a totally legitimate reason (I.e. a prior game) or any other reason because it’s summer streetball and not that serious of a thing—but their initial absence undoubtedly put the team in a hole and stunted their chemistry, all while Sean Bell’s lead continued to bubble.

The difference in the game was bench production; Sean Bell had 92 points from their reserves, while TNP had only 42. No bueno.

Kenny Stephens directing, Joe Pope announcing, music on blast and hundreds of spectators made for a fun night at Dyckman on Wednesday.

In a back-and-forth contest which featured at least 20 lead changes, Skull Gang narrowly escaped with an overtime victory over Rosedale, 82-81. The win was in large part due to Antawn Dobie’s heroics in the final moments of regulation.

Down 66-64 with two minutes remaining, Rosedale’s JoJo Smith (25 points) drove through the lane and converted a layup to tie the game at 66. After a Skull Gang turnover, Smith again took the ball, swiveled his way through the open court and finished with a right-handed layup. 68-66, Rosedale with seven seconds remaining.

After a timeout, Skull Gang forward Mike Glover received the ball at the elbow, took two dribbles and was fouled on a jump shot, giving Skull Gang a chance to the tie game.

But Glover missed the first, and after his second free throw, Rosedale still led, 68-67. After two Rosedale free throws, Skull Gang was down 70-67, with 1.1 seconds remaining.

Out of a timeout, Antawn “Anti-Freeze” Dobie set up on the right baseline, curled around a hard Glover screen, received the ball with his back to the basket, turned and released from 28 feet away.

The crowd erupted, and tied at 70, we had overtime.

“We drew up the play in the timeout, and it was really executed perfectly” Dobie said after the game. “I waited for Mike [Glover] to set the screen, and he came and hit my man so he couldn’t recover. When I caught it, I saw no one was in front of me, so I didn’t have to rush it. I had time to turn and square up to the basket. It felt good and it went in.”

The inside-outside punch of Glover and Dobie shined in overtime, but Rosedale wouldn’t quit.

Down 82-79, Smith brought up the ball, did an in-n-out move to the right side, and pulled up from just inside the three-point line.

Swish, but to no avail. The shot was clearly a two-pointer, and reality hit—it was over for Rosedale.

“This was a game we didn’t want to let get away,” Dobie said. “They’re a young team that played hard for all 45 minutes, so if you let them linger they can win the game. A team like that, you have to take care of them in the first half to really seal a victory, because they don’t stop fighting.”

A bittersweet end to an otherwise classic game, only because in the heat of the moment, you never want these types of battles to end.

Only one team can win, though, and this time, Skull Gang barely took home the victory. 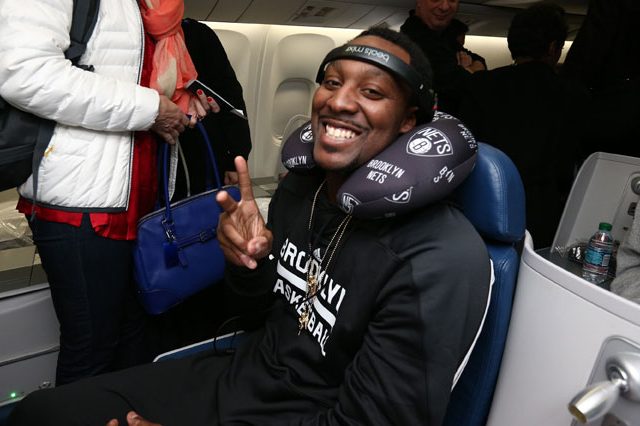 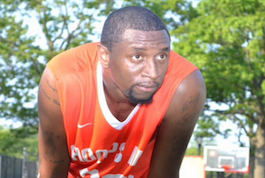 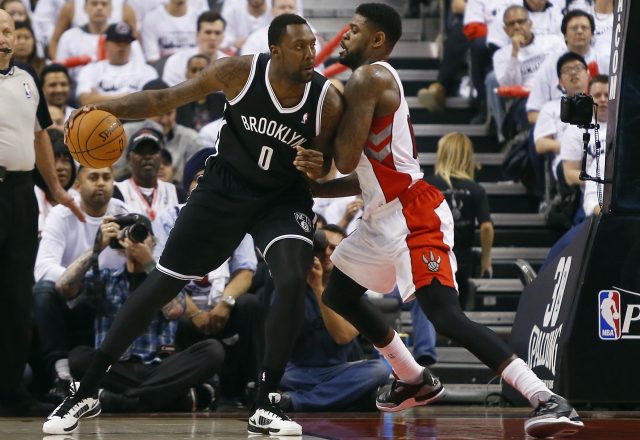