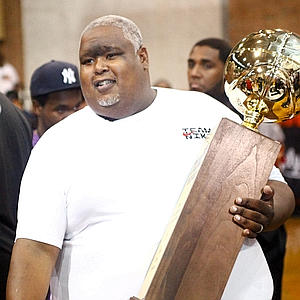 If you’ve been following basketball in any capacity over the past three months, you’ve noticed a) the NBA doesn’t exist and b) as a direct result, its players have flooded playgrounds and gymnasiums across the nation to satiate their competitive craving and arouse fans with (free) basketball peep-shows. Beginning as early as last June, while the Heat and Mavs were competing for a championship, players of all ranks—from Kevin Durant to John Wall to James Harden to Christian Eyenga to everyone in between—created a buzz on the streetball circuit never seen before. It’s cliché, but it’s true: basketball never stops. Word to Bron.

Summer leagues and tournaments everywhere were saturated with pros, but few leagues, if any, rivaled the intense atmosphere of the Dyckman Basketball Tournament. Held at Monsignor Kett Playground in the Washington Heights section of Manhattan on 204th Street and Nagle Avenue, the tournament hosted 56 teams in five different age groups. Games were held seven days a week and attracted up to 2,000 spectators daily, beginning in early June and ending in mid-August.

Returning for its 20th season, the already established tournament hit a fever pitch this summer, courtesy of lead sponsor Nike. The mega-

brand threw the streets a curveball by carefully assembling 10 of New York City’s best players to form Team NIKE, and the mission was simple: win out at Dyckman. Team NIKE had its share of trials and tribulations, finishing the season on a two-game losing streak, but the team rebounded and hit its peak during the playoffs to eventually capture the Dyckman crown.

In order to accomplish this goal, Nike chose Maxwell “Bingo” Cole to direct the super-squad. Coaching (and winning) in New York for over two decades, Cole has transformed into an icon. While covering Team NIKE this summer, I quickly realized Cole is an anomaly in the world of streetball. He’s reached the superstar status that’s usually reserved for the guy with the trampoline hops or saucy handle, not a middle-aged corpulent coach. When Executive Director of the NBPA Billy Hunter came to Dyckman this summer, the first person he shook hands with was Cole. Everyone knows Bingo.

SLAM recently caught up with the legendary coach to discuss his connection with the game, the amazing summer of streetball and the multitude of NBA players he’s helped develop.

SLAM: Firstly, where did the moniker “Bingo” come from?

Bingo Cole: My mother was a die-hard bingo player all her life. While she was pregnant with me, she would play every night, and for some reason, she kept winning. So when I was born, she started calling me Bingo, and it just stuck with me. At this point, more people address me as Bingo and not my real name, which is Maxwell.

SLAM: When and how did you first get involved in basketball?

BC: I was born and raised in the Patterson housing projects in the south Bronx, and I got into basketball at a very early age. There were great basketball players in my neighborhood at that time, like Tiny Archibald, Bobby Jones and many others. Every week we used to go to Rucker Park and watch the greats play. We played and watched basketball all day, so basketball was literally our life. I never played high school ball, but I always wanted to be involved in the game. I started coaching when I was 18, and the game just made more sense to me as a coach. I’ve always had a coaching mindset, so I just studied the game and eventually fell in love with it. I’ve been coaching ever since.

SLAM: How did you land your first gig at 18 years old?

BC: There was this guy in the projects who had a connection with a local AAU team, and I told him I wanted to coach. I got a spot in the tournament, and brought a team from the Melrose Projects to the Bronx, and we ended up winning the whole thing. It’s still one of my greatest memories because I had some great players on that team. That’s how I made my first mark: I brought guys from a different hood.

SLAM: You’ve coached and helped develop a number of NBA players throughout your career. Cool if I drop names and you tell us about your experiences with said individual?

BC: I first coached Ron at the Riverside Church AAU program when he was 15 years old. Ron is one hell of a player and one hell of a person. He’s a warrior. He’s always ready for war, and he makes you want to go to battle. If you were in the street fighting someone who had a gun you’d want Ron Artest by your side. He won’t back down from anybody. The kid was a freak when I coached him. He was so, so talented at such a young age that it was incredible. I coached him on a team with Elton Brand and Eric Barkley.

SLAM: Ron is obviously one of the best defenders of the past decade. Did he always have that “in-your-face” defensive mindset?

BC: Of course. Ron was a great defender from his early days. He welcomed any defensive assignment or challenge. He did not like anyone beating him to the basket because he would take it as a sign of disrespect. Like I said, the kid was a warrior. So I wasn’t surprised at all when he won Defensive Player of the Year.

SLAM: What’re your thoughts on how Ron reacted in the 2004 Detroit brawl?

BC: That was a really tough situation for everyone involved. There’s two ways to look at it—Ron, as a professional, should’ve known better and kept his cool, but at the same time professionals can get caught up and act on impulse. Especially in Ron’s case. He was born and raised in the Queensbridge projects, so if someone throws a beer at him, he’s going to defend himself.

BC: Kemba is one of the most humble and hard working players out there. Kemba’s worked hard on his game his whole life because he’s always been underrated. He grew up playing behind the player who was shining. In my eyes, he forced the NBA to draft him. That was his attitude: “I’m gonna make it no matter what.” He took everything he has. You see, being a small guard in New York City, nothing will be handed to you. You have to go and take it. Kemba seized his opportunities, and never ever took a day off.

SLAM: Do you think his size can hold up in the NBA?

BC: Easily. I think Kemba will be big-time in the League. The kid will have a long, successful career.

BC: I’ve only coached Telfair once, up in Dyckman. I don’t know Bassy too well, but the one time I coached him was fun. He did a little of everything—score, distribute, play defense and efficiently manage a game.

BC: For a second, I had to stop being a fan and come down to Earth. It was an incredible experience to have the back-to-back leading scorer in the NBA come and play with you. This is all amazing to me because I’m doing this on the streetball level, not the college or pro level. Kevin talked, listened and had ideas. It was a great experience.

BC: I coached Corey and Kemba in the backcourt for my first championship in Dyckman. Me and Corey are from the same housing projects. He’s a great kid, too. He works hard and does what he’s supposed to do. He didn’t get drafted, which is unfortunate, but I think he’s a pro and will make a lot of money overseas.

BC: Stephon was one of the first players I ever coached. He was 10 at the time and I coached him until he was 13. I coached Steph, Rafer Alston and Kareem Reid together on a team called Young Life. I used to go out to Coney Island and personally get Stephon. He was very talented from a young age.

BC: We saw Rafer in the park winning games and we took it from there. We just clicked from the start. And believe me, his nickname [Skip To My Lou] is well deserved. The kid had one of the quickest handles I’ve ever seen.

BC: I coached Elton and Ron Artest together. Elton is from Peekskill so he’s definitely quiet off the court, but he was a pit bull in between the lines. He used to make other big-men look like food.

BC: Quite frankly, Lamar Odom is 6-11 point guard, so teams couldn’t guard him. He was a freak of nature, and always caused a mismatch. Any coach would like to have Lamar Odom on his team.

BC: Lance is also a man-child. Honestly, when I coached him, there was no guarding Lance Stephenson, you could just hope and pray he was off. When Lance gets it going, he’s for real. He can shoot, get to the basket and play defense.

SLAM: Lance obviously had a rough rookie season, dealing with off-the-court and locker room issues. Do you think he’ll be able to turn it around and have a successful pro career?

BC: I think he can be a great pro, but he just needs to calm down and learn the game. I think his attitude is a lot better than people give him credit for, but he needs to continue studying the game and maturing. He needs to realize that just because he’s made it out of New York City doesn’t mean he’s made it in the NBA.