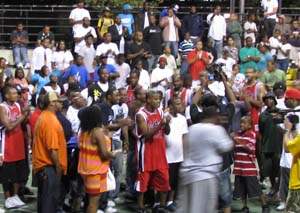 Just moments before Monday night’s tip-off at the Entertainer’s Basketball Classic (EBC) championship, HUNC Records’ (a.k.a. the Sean Bell All-Stars) coach, Raheem “Rah” Wiggins, was asked by the fans how he felt about going into the game against Team Ed Lover without the low-post presence of BJ “The Beast” McFarlan.

Without hesitation, Wiggins confidently declared, “It’s not about having a player…it’s about having a program.” While such an assertion does carry merit, I was not immediately convinced that the Sean Bell squad could solidify its unblemished season in light of “the Beast’s” absence. McFarlan – who was nowhere to be found during the season finale – had been a key cog in the offensive and defensive engines throughout Sean Bell’s road to the ‘chip.’

However, any doubts I had around Coach Rah’s optimism were quickly removed by the buoying perimeter performance of former Boston College standout and Cardozo product, Duane “20” Woodward and the productive output of Rashard “King” Bell (10 points) and Christ the King alum, Mark McCarroll (9 points).

While the first quarter was marked by relentlessly loud banter from the not-so-introvert crowd, the scoreboard remained fairly quiet through the opening ten minutes. Team Ed Lover, propelled by a fearless scorer in Sundiata “Yatta” Gaines, managed an early 12-7 lead – their highest surplus of the game – before “20” Woodward knotted the game at 14 on a free throw to close out the period.

Yatta opened up the second quarter by dropping a three-ball for Ed Lover, which gave the team its last lead for the evening, 17-14. The S.B. All-Stars quickly countered with sixteen unanswered points of their own, receiving buckets from Phil “The Veteran” Grant, Stefan “Stef” Malliet, Bell, McCarroll, and Woodward in the process. Woodward’s tally of eleven second quarter points, mostly in the paint, would stretch the Sean Bell All-Stars’ halftime lead to 39-25 and also stretch his EBC nickname from “20” to “20 in the weight room.”

The capacity crowd at 155th, with a heavy representation from Southside Queens, was treated to a halftime performance from Harlem’s own Ron Browz (maker of the hit single “Pop Champagne.”) A few members of the audience also participated in a spontaneous dance contest fueled by the music selections of resident disc jockey, B Fats. Fats, in tandem with EBC’s MC duo, E.J. and A.G., have kept the raucous crowd engaged all summer long.

Team Ed Lover jump-started the second half with a boost from the complimentary Cintron energy drinks being distributed by company reps on hand and the steady play of Keon Lawrence and persistent scoring efforts of the aforementioned “Yatta” Gaines. At one point, after a fury of baskets by Yatta, E.J. announced that he’s the “Roy Jones, Jr. – in his prime – of the EBC,” referring to the former boxing champ’s pound-for-pound demolition of opponents.

With 57 seconds remaining in the third, Ed Lover had completely erased a fourteen-point deficit before Woodward put them back up by two on a scoop shot in traffic. The Sean Bell All-Stars would enter the fourth quarter with a 48-46 advantage and the crowd’s vocal momentum behind them.

The last leg of the game was owned by HUNC Records and their 22-4 run against the worn down defense of Team Ed Lover. Yatta (high scorer with 26 points) was shutout in the fourth, while Game MVP Duane “20 in the Weight Room” Woodward posted 11 of his 23 points on a variety of finger rolls, treys, and post-up moves. Mark McCarroll’s open-court dunk with a minute remaining put an exclamation point HUNC Records undefeated season, a feat that has only been matched one-time before in the League’s 28-year history.

The final score was 72-50 with HUNC Records earning the first-place grand prize of $5,000 (trophies were in the mail). The runner-up, Team Ed Lover, also collected a check from EBC Commissioner Greg Marius in the amount of $2,500. Though the money and hardware serve as a nice reminder for a successful season, the dedication of HUNC Records’ efforts and achievements in memory of the late Sean Bell provided a feeling of solidarity that will carry us well into next summer’s games and beyond.

In the end, it’s not really about having a player or a program. Rather, it’s about having perspective. And the good folks running the EBC tournament and participating in their games truly understand that.