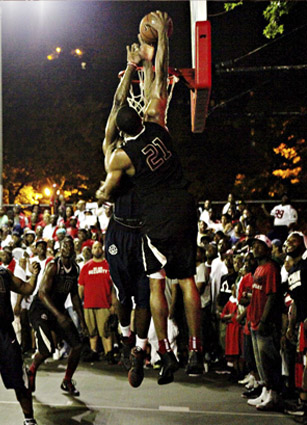 They said they would, but no one believed it. They said come July 20, Team NIKE would suffer defeat, but we just laughed it off. And when Bingo’s troops came out firing, taking a commanding 10-2 lead, it added insult to injury. They were fed up. Fed up with the praise and hype of an unproven team, fed up with being the undercard. With Team NIKE in position to deliver the knockout punch, Ooh Way fired back, emptying the clip.

In front of a crowd well past capacity, Ooh Way Records handed Team NIKE its first loss of the season, 66-61. With the win, Ooh Way improved to 6-0, while Team NIKE fell to 5-1.

“This was definitely a tough loss,” Team NIKE head coach Bingo Cole said. “There was a lot going on, in terms of outside distractions and stuff like that, but we can’t make any excuses. They were the better team tonight.”

On Wednesday night, Dyckman was the red carpet of streetball. Spectators included rappers Jadakiss and Vado, Al Harrington, Taj Gibson and AJ Price of the NBA, and even Executive Director of the NBA Players Association, Billy Hunter. The game was as intense as ever and the crowd was nothing short of high profile, but the real story was the amount of bodies in the park. By tip-off, Monsignor Kett Park was a human zoo.

When the game was supposed to start at 8:15 p.m., it didn’t. When emcee Joe Pope pleaded to masses to “back up” and “make room,” they didn’t. And they simply couldn’t. Dyckman and Nike distributed 1,400 tickets in advance, but more than 4,000 strong crammed into the park.

“It was uncontrollable,” Bingo said. “The tickets ended up being pointless. Everyone got in, even when it was already full.”

After two hours attempting to clear the court, the game finally began at 9:30.

“Team NIKE is a great team, but we were playing for pride,” Hardy said in an interview with Nike Basketball. “They fought hard, but I knew I put the dagger in them when I hit that last and-one with 20 seconds left. The talk is over, and I’m glad we got to prove it between the lines.”

Team NIKE’s guards held their own, as Antawn “Anti Freeze” Dobie finished with 11 points. Dobie’s backcourt partners, Kenny “Seirius Satellite” Satterfield (11 points) and Adris “Too Hard To Guard” DeLeon (seven points) did their part as well, but it wasn’t enough.

“These were two big teams,” DeLeon said. “It was a close game that just came down to the last two minutes. Unfortunately, we left with a loss tonight.”

“T2 had a great game,” DeLeon said. “They couldn’t guard him one on one. We just didn’t switch well on picks and swing the ball well out of double teams. We have to improve the little things, and I think we will.”

After a first half ebb and flow that saw Fisher go for 11 points and Burrell nine, Team NIKE and Ooh Way continued to trade baskets, with neither team giving an inch. But with Ooh Way up three with 13 seconds left, Dobie powered his way to a layup to cut the lead to one. Team NIKE brought its full-court press, but Hardy beat his defender to the lane and finished with an and-one, “game over” type of bucket. Ooh Way supporters swarmed the court in frenzy, securing the nail in the coffin.

While this was one of the more frustrating experiences Team NIKE’s members endured, Bingo and Co. are optimistic going forward. They’re still in prime position to capture the Dyckman Championship, and may even get a second try at Ooh Way.

“Ooh Way executed better than us, no doubt about it,” DeLeon said. “But this loss was a growing experience for us. We’d never been in a position like this, where it’s crunch time and we need a bucket or two. We’ll learn from this and grow, you can bet that.”

“We want redemption,” Bingo added. “Winning it all will give us that, and I’m confident in my team. We’re gonna make this statement, just watch how it plays out.”

We’ll see if The Boys in Black can rebound from this loss in two weeks, when they play 914 on August 3. There are still many questions to be answered, but for now one thing is certain: only one team is undefeated, and it’s not Team NIKE.