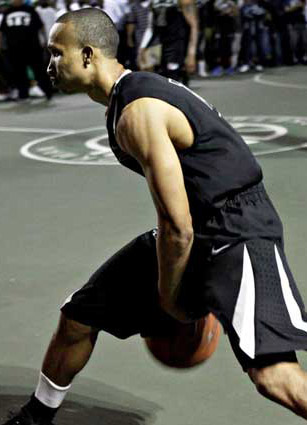 In the first primetime matchup of the summer, Team NIKE easily disposed of United Brooklyn, 71-51. And if Wednesday was any indication, Coach Bingo’s squad has set the tone at Dyckman.

As the mass influx of patrons flooded in, 204 & Nagle slowly evolved into a zoo; the place was at capacity before the sun was even close to setting. Kids were climbing all corridors of the fence, the line was constantly 30 deep to get through security, and the masses on the periphery were partying and enjoying summer. Players, family members, casual fans, and everyone in-between anticipated the event and came out from every borough to see what Team NIKE was capable of and how they would coexist. With United Brooklyn trash talking and making bold statements pregame, Team NIKE was determined to set the record straight.

Although he didn’t get the starting nod, Dyckman legend Adris “Too Hard To Guard” DeLeon paced Team NIKE throughout. Prior to tipoff, there were numerous conversations about DeLeon’s legacy here and all the victims he’s caught. I eavesdropped and heard a few stories about DeLeon getting the best of Sebastian Telfair and Corey Fisher. Returning from professional basketball in Spain a few weeks ago, DeLeon was ready to put on for his city.

“It’s great to be back home,” DeLeon said after the game. “I felt real comfortable playing at home. I feel like I can play against anyone in the world on this court, and I’m real excited for the rest of the season.”

DeLeon got on the scoreboard as soon as he checked in. The game quickly shifted from a Team NIKE show to a Too Hard To Guard show as the Dyckman favorite crossed his way over for layups and jumpers, scoring and distributing the ball as he pleased. But this was just another game for DeLeon, who’s put on a show at Dyckman many times before and wasn’t eager to gain any more respect.

“Our only mission was to come out here and get this W,” DeLeon said.

Entering the game, United Brooklyn felt they had as good a shot as any to dethrone the favorites. Their roster featured Denver Nuggets swingman Gary Forbes, National Basketball League (Australia) point guard Gary Ervin, as well as former McDonald’s All-American and Villanova standout Curtis Sumpter. But Forbes was non-existent for most of the game, as he missed his first shot and never could fully regroup. Despite Forbes’ subpar performance, Al Shep of Team NIKE expressed his respect.

“Me and G Forbes go way back, man,” Shep said. “I was playing ball with him back when we were kids growing up in Church, so we have a long relationship. And him coming out here makes you step up your game, because he’s a pro, and at the end of the day that’s where we’re all trying to get to.”

Easily the most outspoken United Brooklyn player was Kavon Lytch. Lytch was the final cut from Coach Bingo’s team and promised a special performance, but he arrived at the park with 2 minutes left in the first half and his team down 14.

“I had another game somewhere else and I got here by halftime,” Lytch told NikeBasketball.com. “I looked at the score and I was like ‘damn’. They already had the momentum; I mean I’m only one man. There was nothing I could do.”

But that was no excuse for the rowdy New York City fans. Spectators got into Lytch’s ear the whole game, even having a few verbal altercations with him. After all, Lytch was the face of the Game 1 trashtalk, saying “When I play against [Coach] Bingo… if yall are the casualties Coach Bingo got, then I’m sorry.”

As United Brooklyn continued to struggle, the chemistry between Team NIKE proved to be too much as they continued to flow smoothly in the second half. Anthony “I Robot” Glover was a beast down-low, as he scored, rebounded the ball and drew double-teams to free up open shooters at the three-point line. With the game slowly turning into a 20-point embarrassment, Anthony “Africa” Pimble closed the show with multiple breakaway highlight dunks.

“I thought today’s game was good,” Pimble said. “Everybody played together, and nobody had an ego. We went out and tried to get a win.”

One week in, Team NIKE has already sent a message to the rest of the competition at Dyckman. Coach Bingo and Co. will play defending champions Takes No Prisoners next Wednesday. As we saw with United Brooklyn, one off-night can lead to extreme embarrassment. And as Africa says, anyone can come and get it.

“Everybodys just a regular player out here… Gary Forbes wasn’t anything special because this is Dyckman. It’s go hard or go home.”

For more on Team NIKE and the Dyckman Tournament check out NikeBasketball.com.