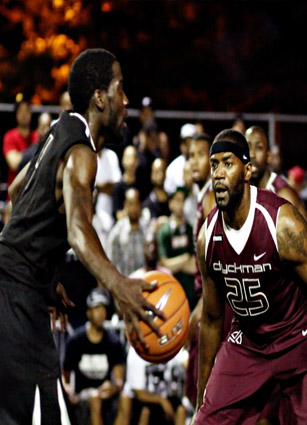 In its second game of the Dyckman season, powerhouse Team NIKE defeated defending champion Takes No Prisoners, 71-56. Similar to opening week, Coach Bingo’s squad jumped to an early lead, but this time the opposition fought back. However, when all was said and done, Team NIKE weathered TNP’s storm to escape with the victory.

“This was our second step in a long journey,” said Team NIKE point guard Antawn ‘Anti Freeze’ Dobie, who paced his team throughout, scoring nine first-half points and 16 for the game. “Although we may be the favorites, they’re still the defending champions of the park and we have to respect that. After all, we’re trying to get to where they’ve been.”

Due to the inclement wether last Wednesday and Saturday, fans finally saw the the make-up game come to fruition last night. But the short notice caused a scheduling conflict for some of Team NIKE’s players and forced Coach Bingo to lead a shorthanded team, with only eight players suiting up.

But those eight completed the task, as Team NIKE was still able to pull out the double-digit win. A key factor was Coach Bingo giving TNP a taste of its own medicine, engaging in pressure defense and utilizing the full-court press. The lock-up D helped Team NIKE cause turnovers early and jump out to a 35-25 halftime lead, a lead they would never relinquish.

“We knew they were going to make a run,” said team leader and Dyckman legend Adris ‘Too Hard To Guard’ DeLeon. “No team is going to give up. Since we have Team NIKE written on our chest, teams want to come out and kill us. They feel like they should be on our team and want to prove something. But we knew that, and we were prepared for a tough game. Everybody stepped up to the challenge and we got the job done.”

“A lead against TNP is never safe, and we all understand that,” Dobie added. “Basketball is a game of runs, but what matters is how you withstand those runs.”

DeLeon was a co-general in the backcourt, as he directed his team throughout and finished with 18 points. Coach Bingo knew strong backcourt play was necessary in order to beat a stingy, scrappy TNP team, and his guards were ready for the challenge.

“We got a lot of defelctions on defense,” Dobie said. “A few easy buckets here and there added up. Once we did that once or twice, we felt confident we could keep it going.”

With 10 of the most respected streetballers in the world, Team NIKE walks around 204 and Nagle with a target on its back. The standing-room only (if that) crowds at Dyckman bring out the best in the opposition, as nearly everyone in the park is hoping to see Team NIKE fail. You could call them the Miami Heat of streetball, except the Heat have only three superstars, whereas Coach Bingo has 10.

“All of us respect our opponents,” DeLeon said. “But we know everyone wants us to lose. We just got to prove ’em wrong.”

Another big contributor was big-man Anthony ‘I Robot’ Glover, who gobbled rebounds all night long and gave Team NIKE a presence in the paint. The former St. John’s Red Storm finished with only seven points, but all of his buckets came late in the game, with each one deflating the opposition.

“The game was tough. but we knew it was going to be like that because TNP is always tough,” Glover said. “Unfortunately I got in foul trouble early in first half, but I came out strong in the second half and tried to control the paint and grab rebounds. I basically just played my role.”

The determining factor in Team NIKE’s success will be how well each star can ‘play their role’. If winning stays at the top of everyone’s list, Glover is confident they can take home the Dyckman crown.

“The respect we got for each other is what’s keeping us unselfish,” he said. “And that’s why I think no team will beat us if we come ready to play and just do our job. There’s some unbelievable players in this tournament, but I think we can match up with anybody if our mindset is right.”

Catch Team NIKE’s third game tomorrow night vs. JTA at 8 p.m. at Dyckman Park on 204 & Nagle. And Peep the video below, which includes the Nike Sportswear Ice Cream Truck that debuted last night and will be there again tomorrow night.