The Summer That Saved City Basketball 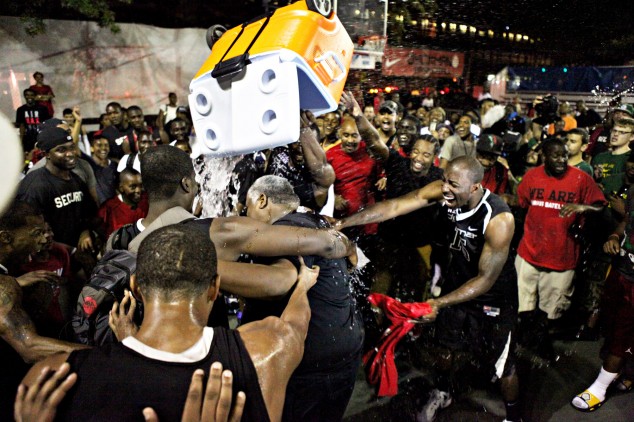 It’s the only way one could describe what took place from June to August at Monsignor Kett Playground in Washington Heights. Everything from the special guest appearances by Billy Hunter, Mark Cuban, Jadakiss, Vado and Juelz Santana, to Kevin Durant capping off his pilgrimage to the Mecca accompanied by his DMV homie, Michael Beasley, seemed almost too cool to be true. No one would believe that 10 of NYC’s best would issue the challenge ‘Run With Us or Run From Us,’ and dominate their competition, only to lose in the regular season to a team built to beat them. And to face the drama of nearly turning on each other, the pressure of dealing with naysayers and finish the tournament that became, if only for a few months, the epicenter of basketball by defeating the first foes to defeat them, all on a free throw followed by a camera angled 360-degree salute to win the championship? No. There’s no way that happens without the help of Michael Bay, Stephen Spielberg or at least an NYU drama student on the rise.

The beauty in everything that happened to Team NIKE is that it was organic. They crushed opponents, they beat NBA players and they created a worldwide interest in summer basketball that hasn’t been here since Kobe Bryant came and did work at the Rucker back in 2002. The need for reinvigoration was clear, but what transpired was less because of what was planned and more the result of an idea from three men who act as cultivators for summer hoops.

“One day we were chillin’ and I was like what would happen if we put the 10 best players on the same team and let them rock together to rep the swoosh or NYC?” said native New Yorker and Nike’s Global Brand Manager Paul “PR” Rivera. “I was tired of hearing how we (NYC basketball) fell off. I’ll put my name on the line that we have the best in the world, so I figured let’s put our money where our mouth is.”

Did New York really fall off in terms of talent? Nah, but it was obvious that the lore of drawing legends to the park just wasn’t happening. Something needed to be done.

“No one was as inspired as they used to be,” said Will Perkins of Nike Basketball Brand Marketing — East. “We wanted to figure out what could do to turn the switch back on? So we created Team NIKE. Bingo (Coles) was the obvious choice as the coach and Dyckman’s been the dopest league for the past five years. Put all that together and to add more heat, let’s put a bounty on them. Everything from that point will be about bragging rights for Team NIKE and other guys are going to feel slighted and want to come at them.”

The idea sounded dope. It was two parts innovative and daring, mixed in with a little bit of we’re out of fucking minds. But nothing that gets remembered is ever played safe, right?

“When PR first told me the idea, I pretty much told him I thought he was crazy,” said CEO of Game Seven Marketing, Justin Leonard. “From being involved in all the tournaments over the years, I know people are super sensitive. I was thinking doing the team is gonna do more harm than good. Directors were gonna feel like ‘why aren’t they in my tournament?’ And at first Paul was saying they couldn’t play anywhere else, only on Team NIKE. That was the only thing keeping me from co-signing it, but as it developed they were allowed to be in other tournaments, just not all together at once as Team NIKE. After that, it was a no brainer.”

The concept was down; the venue and the coach were picked. All summer long we heard from the players, the refs, the rappers and even the fans, but it was Will, Justin and PR who dealt with the highs and the lows of their creation.

SLAM: With so many players to choose from in the city, tell me what the selection process was like.

Paul Rivera: I played all over the city so my background comes from the ball player perspective. Those are people that I hooped with, so I could’ve picked the team myself but Jus, Will, Bingo, Kenny and I had a meeting. My only thing was whoever we picked had to play hard, play together and be exciting to watch. When we got there we went down a list: point guards, scorers, dunkers. Not one time when we were like ‘ahh I don’t know about this guy’. I hadn’t seen Vern and Shep play before, but Bingo said ‘I need these two guys’ and I wanted to empower him as the head coach. It was much easier convo than I thought it would be.

SLAM: Were there any problems getting guys to commit?

PR: There was no convincing. We told the guys we picked that this is an opportunity to make history. MY only concern was Adris (Too Hard To Guard), because I wasn’t sure if I wanted him to rock with us and I know what he means to the community. I wasn’t even gunna offer him a spot because he plays with the home team The Young Ones and he’s G.O.D. up there. He’s the one player I had a personal conversation with, because I wanted him to understand that he is Dyckman. They’ve seen him grow up and I didn’t want him to be perceived as oh he’s blowing up and he’s switching sides. I needed to make sure he was secure with his decision.

Will Perkins: It took us forever to find T-2 (Quinton Hosley). Even with all of our resources, we didn’t have a contact and he was the one who we felt is the best player in the game; we needed him. Kavon (Lytch) was on the original roster and Bingo felt like he couldn’t coach him. As the GM’s of the team, we knew the coach had to be comfortable with his players and we gave Bingo a lot of autonomy in terms of that. Once Kavon was dropped, I went out top IS8 to recruit The Beast (BJ McFarlane). He’s very experienced and provided leadership. We wrapped about it and it was cool. Then Kavon did some knuckle head shit and made us look good for not picking him.

SLAM: It’s funny you say the picks were easy because I imagined this big white board and like 30 to 40 names on it. Who were the last couple cuts and why?

PR: We identified who we needed: IRobot (Anthony Glover), Vern (Vernon Goodridge), T-2 can do it all, gotta get Kee-Kee (Keydran Clark), K-Sat (Kenny Satterfield), Freeze (Antawn Dobie), they were just obvious answers. Not to say Gary Ervin or Problem (Aaron Williams) couldn’t have been a part of the team. BJ and Kavon were close, Andre Barrett was a consideration but he doesn’t play outside. And Steve Burtt’s name came up, but we have so many guards and Burtt can’t score like Dobie or Kee Kee or Dyckman’s son, Adris.

Justin Leonard: You know, Mookie (Thomas) was right there, Kavon, Gary Ervin. Mike Campbell was in the conversation, but we went with the guys we picked for variety of different reasons. And there’s a slew of younger dudes like Edgar Sosa, Justin Burrell, Curt Kelly and we didn’t have a handle on where they were and what they were doing, but who knows what will happen going forward. Next summer will be interesting.