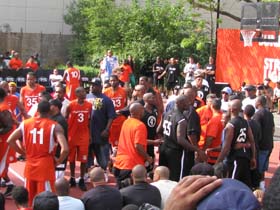 The former LIU scoring sensation and Nike Battleground champion willed his X-Men team to a pair of victories (including the overall Chip) in Saturday’s Nike Tournament of Champions (TOC), further validating his blacktop reputation as “The Icon” of New York City summer basketball. Campbell took home the coveted MVP award and nullified a 40-point outburst in the finale by Antawn “The Teacher” Dobie, a more recent LIU alum and current professional in Europe.

Campbell and Dobie were just two of NYC’s finest competing for bragging rights in the 2nd Annual TOC that pitted the winners of four premier men’s leagues in NYC – Dyckman, West 4th, Pro City, and the Tri-State Classic – against each other for a two-round challenge to see which team and league reigns supreme in the talent-laden summer basketball tournaments of the Big Apple.

In a prelude to the final, the Dobie-led Money Train squad representing the Tri-State Classic, capitalized on the absences of Queensbridge stars (Pro City) Ron “Tru Warier” Artest and Ryan “Special FX” Williams by mounting a fourth quarter come-from-behind win (113-98) over the club from the Q-borough. Money Train’s late game resurgence was propelled by the high scoring acts of Dobie (35 points), Jason “J-Ha” McLeish (28 points), and Corey “The Undertaker”

Underwood, along with the fine clean-up work of Stan “The Janitor” Milien (14 points derived mostly from offensive rebound put backs).

Those who turned out to see the newly named Houston Rocket, Artest, do battle with Darren “Primal Fear” Phillip (also missing in action), were not left disappointed. Darryl “Showtime” Hill – an ex-St. John’s stud – dazzled the Goat Park audience with an assortment of crossovers, spin moves, and behind the back dribbles that produced 18 points. If your short-term memory fails to recall the former Red Storm and Cardozo point guard, check out this grainy, but exciting clip of Hill doing what he does best.

The second semifinal game featured the kings of Dyckman, Bingo’s All-Stars, and Campbell’s team of West 4th Street streetball superheros, the X-Men. Agitated by the summer’s hot sun and hecklers from the crowd, this hardly fought contest was mired by a late game confrontation that saw the oft-quiet Kenny “Serious Satellite” Satterfield lose his composure and partake in a shoving match with some X-Men instigators who chatted confidently behind their 14-point lead. While the game was close at the half (53-50 in favor of the X-Men), the inside-outside combination of Mike Campbell and Tommie “Gunz” Eddie proved to be too strong down the stretch for Satterfield and his seasoned colleagues, Kareem “The Best Kept Secret”

Reid and John “Franchise” Strickland. After the stoppage in play with 35 seconds left, X-Men went on to win, 108-94.

If the bench clearing altercation put a dent in any on-looker’s perception of this year’s Nike TOC, it was quickly dismissed by the expectation-exceeding finale between Tri-State’s Money Train and West 4th’s X-Men. This overtime thriller that was decided in near darkness, shed light on the never-too-clichéd importance of converting from the charity stripe. Antawn Dobie even acknowledged his understanding of this timeless truth in a recent NY Post article: “It’s free points. The clock is stopped and nobody’s guarding you. You gotta knock ’em down.”

While Dobie’s consistency from the free throw line helped Money Train advance into the West 4th semifinal (Money Train had also participated in the Cage tournament), his printed words would come back to haunt him in the TOC. Money train missed 8 free throws (two by Dobie) in the last 12 minutes of regulation, which cost them their lead and ultimately stole their momentum going into the condensed 2-minute overtime. Campbell then carried his X-Men team – who, by the way, all looked comfortable on the diminutive West 4th-esque Goat Court – into the sunset with a 97-94 victory over Money Train.

Campbell finished with a team-high 24 points and preserved his nickname in the process.

-Nike spared no expense for the capacity crowd: Free admission. Free beverages. And free BBQ. The combination of ribs, burgers, mac and cheese, and Gatorade kept the public satiated and hydrated throughout the day.

-The West 4th Women’s team also captured the League Chip against Uptown Challenge to open up for the Men’s tournament.

-The rotating resident MCs from each park were a nice touch to the venue. Joe Pope was a hands-down favorite amongst the crowd.

-Corey “The Undertaker” Underwood, a 6-10, 240 pound southpaw with a deft touch, is a problem for defenses.

-Mike Glover could have really used his brother’s presence to help keep Tommie “Gunz” Eddie from backing his way into the paint.