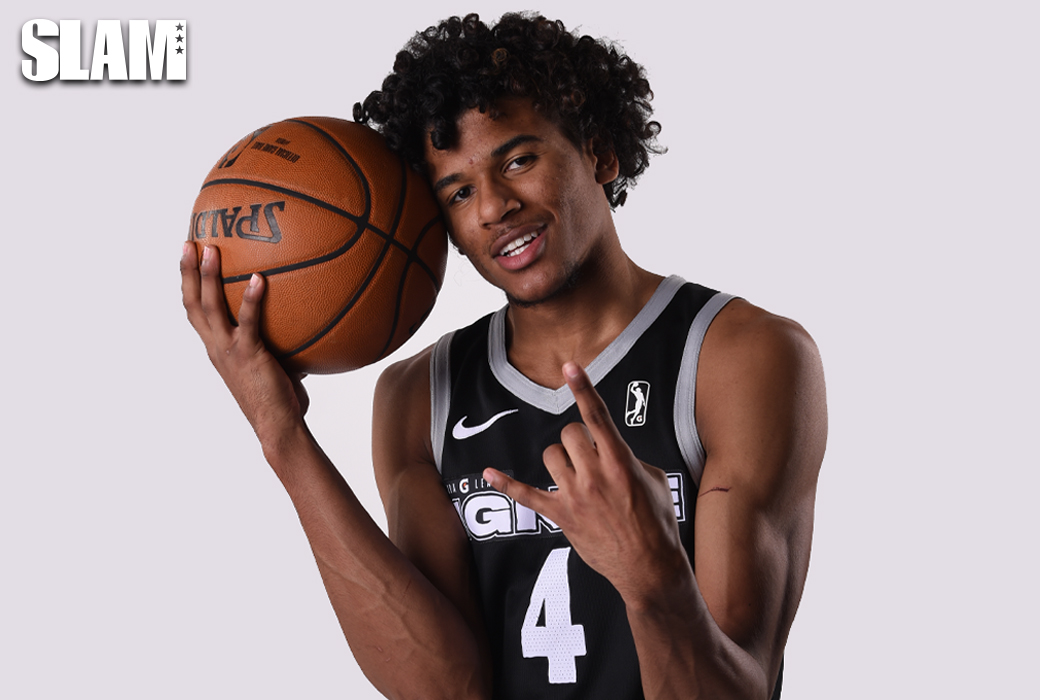 We’re here now, so be here now. Though this is our Future Issue, nothing is ever truly promised. The past and the present have absolutely given us enough step-back jumpers and wildly explosive one-handed dunks to fully believe that Jalen Green’s future will be sunglasses-necessary bright. But Green himself isn’t about what’s to come. He’s about the moment. His feet, laced in “Aunt Pearl” KD4s, are planted firmly on the ground, in lockstep with his mind. Green is here now.

He’s earthbound on this February morning, taking the very JG photos that line these pages. The poses that dot his IG feed—laid-back grins and confident crouches—are the same ones that made us so excited about his first solo SLAM cover (salute to SLAM 225 with ’Rife and Gup). He then smiles about a few old memories during our talk on Zoom. To really be able to think about where JG’s going, we have to understand where he’s been.

Cut back to the middle of August 2018. The hardwood floor at Life Time Fitness on the West Side of Manhattan has been feeling a stampede. There’s a bunch of people watching a dunk contest between the nation’s best high school ballplayers. They’ve been jumping with the dunkers, feeding off the energy that their flights bring. Every time Andre Jackson, Jahmi’us Ramsey, Cassius Stanley and Green lift off the ground, the crowd does, too. They’re shaking the room.

Jackson and Ramsey don’t make it to the finals, so it’s left to JG and Stanley. Back and forth they go, the crowd getting more and more hype. Something keeps happening. That pre-dunk hype is giving way to an in-the-moment silence. They watch and freeze, waiting to be given the air back. For just a brief moment, it belongs to Green. He commands it and with it comes command of the room. That control only lasts two seconds at a time. It’s those two seconds that matter here. Everyone goes from anticipation to appreciation in that short span. In between those seconds, though, is where the moment gets its life. Those two seconds are why we’re still bringing it up nearly three years later. Those two seconds are when the stampede stops. It’s when Green is throwing the ball between his legs, with multiple feet separating him from the suddenly-quiet hardwood. Those seconds carry calm. It’s a crazy juxtaposition, isn’t it? The game’s ultimate athletic feat always brings so much intensity and excitement. Here is a 16-year-old kid existing somewhere in the middle of all that calm and excitement. Owning grace and power at the same time.

Our eyes blinked and it was all over. The floor was shaking again. Green came down from his between-the-legs dunk and was swarmed by the rest of the ballplayers in the gym. Everybody was losing their minds. Rod Hampton, father of Denver Nuggets guard RJ Hampton, typed out $50,000 on his phone. Still not sure if that was an evaluation or a promise, but it was definitely a valid reaction. Stanley won the contest but Green won the crowd. And that’s just a single example of Jalen being Jalen.

JG likes up. He likes to dunk on anyone who tries him. He likes to turn the corner slowly, then hit the gas quickly and rise up faster than most defenders are prepared for. He likes to drive the lane, take contact, finish with either hand and smirk on his way back down the floor.

Cut to right now. Green’s latest stop is the G League Ignite Select Team. He’s the main draw on a first-of-its-kind squad that is giving NBA hopefuls another route to the League. He and five other prospects have linked up with a handful of vets to get a head start on playing pro ball by matching up against other G League squads and international teams. It’s the real deal, though. Coached by 15-year pro and three-time NBA champ Brian Shaw, Green is on the fast track.

Because all of the above is true. The 6-5 guard is pro-ready. His scoring ability, his leaping ability and his competitiveness all prove that. But Green is the first one to say how much work he still needs in the pick-and-roll, on defensive rotations and as a communicator. He’s been proactive in learning as much as he possibly can from Shaw, Amir Johnson, Jarrett Jack and Bobby Brown. The other names on the team include Jonathan Kuminga, Isaiah Todd and Daishen Nix. No matter what happens next, Green and his teammates are making history here.

“I just look at it like, we just hooping, playing basketball, just because we ain’t played in so long,” Green says about Ignite’s eventual legacy. “I mean, I know we creating history. I know we made a change that hasn’t happened for some years because I know Amir was the last high schooler to get drafted, but I don’t even really look at it like that. We all trying to chase the dream and get to where we want to go and accomplish our goals.”

Green’s goal is the League, of course. The weight of the opportunity isn’t lost on him.

“I was so nervous,” Green tells SLAM with a hint of relief in his chill Cali cadence. “The night before our first game, I was just, like, I couldn’t sleep, my stomach was like…like, you could feel the nerves, but as soon as you step on the court, it all goes away. It was fun, me playing on the big stage now. The court is bigger, the lights are shining. You’re there.”

With averages of 17.1 points, 4.9 rebounds and 2.9 assists in his first seven games, he’s definitely there. And he’s asking questions to get even better.

“You don’t know everything,” the ever-observant Green says about his work ethic. “Especially as you go up in the level, it’s like you’re restarting basketball all over again. I’ve been telling my mom and them that I feel like I’m restarting high school basketball, just at a different level.”

Green, whom we’ve been covering at SLAM for over three years, is different now. The ease with which he’s always moved has recently been compounded by a maturity. The 19-year-old wants to make it. He’s taking the steps, clocking the hours, watching more film than he ever did before. And while the physical side of the game is always being grown, JG’s focusing on two other aspects of hoops.

“Biggest thing I’ve learned probably is, like, terms, knowing where to be, knowing how to talk, and then probably just pace,” he says. “You gotta have a pace in the game or it’s gonna be so hard for you. In high school, I used to get away with just coming down court, being faster than everybody, being stronger, and now you’re on the court with people who are just as strong as you, or even stronger, or faster than you. So you gotta be smarter about what you’re about to do.

“Just slow down,” he continues. “The game is fast, like, on TV, it may not look fast, but when you’re on that court, it’s super fast and it just happens like that. So it’s just about slowing down. Not even just stopping and going, it’s more like slowing, stopping, seeing what you have, you got 24 seconds, use that 24 seconds. Like, play as a team, make the right passes, find the first open man, take what the defense can give you. It’s a lot that goes into it and it’s just crazy because there’s so much you can learn. It makes you excited.”

And there you go. That’s a glimpse into the basketball future of Jalen Green. The young fella is hungry. He wants more. He doesn’t want to talk about it yet, but whatever’s going to unfold for him will be met by a combination of dynamic athleticism and thoroughly studied basketball theory. The mix of those instincts with those thoughts will make sure his feet, whether in KD4s or something else, won’t stay on the ground for much longer.

As for his future off the court, Green knows a little more about that. He’s part of the eBay x SLAMKICKS Sole Starters, where he’ll get the chance to show off his knowledge of sneakers by taking full advantage of eBay’s extensive infantry of kicks. And he’s going to continue to give back to his hometown, Fresno, CA.

“I donated 50 turkeys on Thanksgiving to families who need them in Fresno, and then for Christmas, I did a little toy drive at the Boys & Girls Club, the Boys & Girls Club I was going to when I was in high school and played basketball and stuff for hours,” he says. “We gave them some Beats [headphones], a backpack and some shoes. We just gave it to all the kids. But, yeah, I’ve always wanted to give back to the community of Fresno just because that’s home.”

The future is coming into focus for JG. Everything’s pointing toward making a real impact, both on the court or off it. And with that in mind, we had him take one more trip down memory lane, to the SLAM Summer Classic Vol. 2. He was part of the group that damn near shut down Dyckman.

“The SLAM Summer Classic was crazy,” he says as the adventure of the day suddenly streams back to him. “On the court, playing at Dyckman was awesome, y’all did that thing. But off the court, just the guys who were there, the atmosphere we were in, who we were around, it was fun. I don’t have any certain memory to say right here but it was real fun. That Dyckman experience was crazy. And then, matter of fact, I do have one. When we got on the bus and everyone that was at the park just started chasing us down the block on the bus, that was crazy. I was in awe. They really chasing us. Like, following us. We were throwing shoes out there and stuff. It was just a lot to love and you could feel it.”

There was nothing calm about that day uptown, no type of grace to be offered. It was pure, beautiful chaos. A neighborhood that revolves around the ball finally got a chance to show its passion to a national audience, an audience that featured Green.

The flicks have been taken and the call is winding down. Because JG is a legitimately nice person, the last thing he does is finally indulge us with a prediction of what he expects for himself.

“The Jalen Green story? Well, hopefully I would have accomplished a lot of accolades in the League. Being known as a GOAT or something. Top-three for sure. And hopefully I’m into business by [that] time. I’m not sure what, but I do want to be successful on and off the court, be able to take care of my family. Yeah, that’s all I got right now.”

Now it’s back to the moment.