No current NBA All-Star has taken a more unlikely path to success than Jimmy Butler. And he's still headed up. 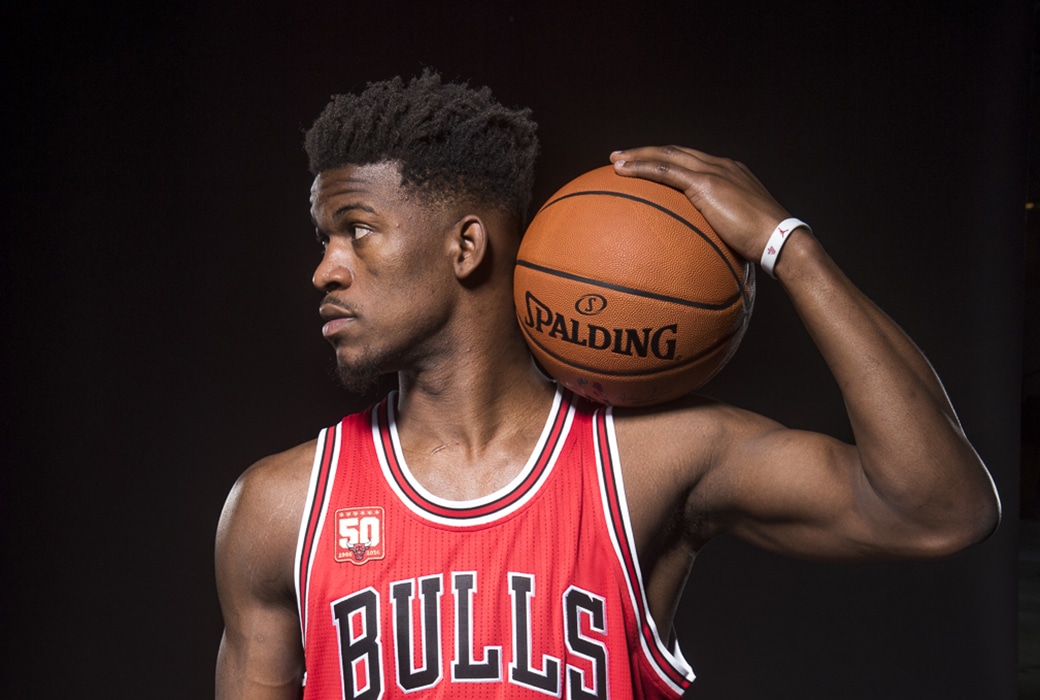 It’s mid-day Saturday of All-Star Weekend in Toronto, and Jimmy Butler is posted up in front of our backdrop for this issue’s cover shoot. And he’s happy to do it. Much like he’s happy with all his other commitments this weekend; giving out food via NBA Cares yesterday, All-Star practice and media availability earlier today, helping at a Jordan Brand practice and doing store appearances for the Brand later today. As for the actual game, which will tip off tomorrow in front of a star-studded crowd in the Air Canada Centre and broadcast to millions of fans around the globe? Jimmy can’t even play in it, due to a left knee strain that’s had him out of action since February 5.

Some guys—especially ones who are leading the NBA in minutes for the second year in a row—would use the injury as a reason to take a well-deserved vacation. But that would require being bored with the trappings of NBA stardom, which Butler is a long way away from. In fact, he’s still struggling to believe how fast it’s hit him.

“This isn’t something I even dreamed about as a kid,” Butler says of NBA stardom. “Honestly, I didn’t even think I had a decent shot of being a pro until my senior year in college.”

The Chosen One, Jimmy Butler is not.

You probably know the story by now, but it bears at least a quick repeat. Born in Houston 26 years ago, Butler didn’t see much of his father, ran into trouble with his mother and spent part of his high school years effectively homeless. Needless to say, this was not the best background to become a professional athlete, and Jimmy (blessed with size and athleticism, at least) had to bust his ass at Tomball (TX) High just to earn his way onto the team at Tyler (TX) Junior College.

Solid play at Tyler earned Butler DI looks, and he transferred to Marquette, where he averaged an underwhelming 6 points and 4 rebounds as a sophomore. By his senior year in Milwaukee, Butler was averaging 16 and 6 and getting scouted by teams in the League.

When Draft night came, Butler was chosen with the last pick of the first round by the Bulls. For reference, here are the 30th picks in the Drafts before and after Jimmy’s: Kevon Looney, Kyle Anderson, Nemanja Nedovic, Festus Ezeli, Lazar Hayward and Christian Eyenga. Who he play for? No one.

“At first, the only thing I could do was play hard,” Butler remembers. “The instruction I got from the Bulls was to give effort. With effort comes defense. If you’re playing hard, you’re trying to guard. That’s where I made a name for myself at first.”

Despite his humble beginnings, Butler didn’t lack confidence once he saw how he matched up with other players, at least physically. And before long, he wanted more: minutes, opportunities, shots.

“From the moment he got in the League, Jimmy had unbelievable faith in himself and confidence in his abilities,” says Adrian Griffin, a Bulls assistant when Butler entered the L who now works for the Magic. “But he wanted to run before he walked. I helped teach him that it will take time to get where he wanted. But he took what he learned and ran with it. A lot of guys in this League say they want to be great, but don’t actually show it in their work. Jimmy did the work. He put in extra work before practice. Extra shooting after practice. Watched film. I also remember countless hours discussing the power of thoughts. Believing you can make shots, stuff like that. He worked on every aspect of the game.”

Gradually, the work paid off. When Luol Deng, another one of Butler’s mentors and theretofore Coach Tom Thibodeau’s do-everything swingman who was leading the L in minutes, got hurt halfway through Butler’s second season, the minutes started coming Jimmy’s way. The next season, the Bulls dealt Deng. “When Luol got traded, that’s when Jimmy really got a chance,” Griffin remembers. “Thibs started playing him more and we were like, Wow, he’s not scared of big games. Wow, he’s not scared of guarding LeBron James. Those little moments added up and showed Thibs and the organization that they had someone special.”

From there, it was on, with both the work ethic and the confidence playing out. “I got with my trainer, who is with me right now, and we worked on getting my offensive skill set flowing,” says Butler after our photo shoot has wrapped, gesturing a few feet away at personal trainer Chris Johnson. “Chris is the best at what he does, and my confidence comes from the work I did with him. I’ve been playing basketball since I was young. Some things you’re going to be better at than others, and that’s OK. I think I’m pretty decent at all of them, and now the offensive game is starting to sprout.”

Co-signs Johnson, “In order to be a great teacher, you’ve got to have a great student. So all this success goes to him for all the things that he does and believes and he deserves everything that comes to him. Whether it’s really light and just working on mechanical footwork, or it’s really going hard or shooting, Jimmy’s a joy to work with.”

The confidence showed when Butler turned down a four-year, $44-million contract before last season, betting that he’d get even more as a restricted free agent a year later. Sure enough, Butler exploded in ’14-15, leading the League in minutes while making his first All-Star team and averaging 20 ppg for a Bulls team that had the eventual conference champion Cavs on the ropes in the second round of the Playoffs. Suitably impressed, the Bulls gave Butler the five-year, $92-mil extension he wanted.

Basketball-wise, the contract did little to slow Butler’s ascension. He worked as hard as ever last summer and came back this year with by far the most advanced offensive skills of his career, while remaining a top defender. As of press time, which reflects the 48 games Butler played before the knee injury, his numbers are pretty eye-popping: 22.4 points, 4.3 assists, 5.2 rebounds and 1.7 steals in a League-high 37.9 minutes per game. He’s got an elite-level PER of 21.9 while shooting 46 percent from the floor, 33 percent from three and 83 percent from the line. He dropped 40 in a half against the Raptors on January 3, then put 53 on the Sixers less than two weeks later. Jimmy Buckets, indeed. “In my opinion, he’s the best two-way player in the League,” Johnson says. “He plays both ends, he logs the most minutes. He’s had a coaching change. He still maintained an All-Star status. This All-Star experience has been really good because you see a lot of really great players in the game come to him and embrace him and say, ‘Jimmy, it’s your time. It’s your time. This is your League, you can do this. You’ve done it once, do it again, do it again.’”

As an individual story, it’s almost impossible to find a flaw in Jimmy’s progression. He came from next-to-nothing to have a mega contract, a lucrative deal with Jordan Brand (see sidebar for more) and to traipse around Toronto repping the NBA and Jordan while also getting to shoot his first SLAM cover. He’s gone from being the last pick in the first round of the 2011 Draft to being one of just three players in that class to be chosen for multiple All-Star Games (Kyrie Irving and Klay Thompson are the others).

There is a team aspect to this story, too, though. And that one is decidedly incomplete. The Chicago Bulls’ most famous player is Derrick Rose. Their most accomplished is Pau Gasol. The longest-tenured member of their roster, who also happens to own the team’s largest personality, is Joakim Noah. But at this point, Jimmy Butler is a better player than all of them. But who’s the leader of this erratic, potential-filled mix of a squad that has a first-year coach (Fred Hoiberg) who has seemed in over his head at times? A team that has played like the best team in the League some nights while looking like a Lottery team many others?

For his part, Butler, who is generally open and cheery with myself and the entire SLAM crew during our shoot and interview, sort of dodges the question when I pose it to him. “I’m just trying to be the best player I can be and be the best person I can be,” he says generically. “I’m going to continue to be a good basketball player and help the Chicago Bulls win games. And I think more importantly, continue to be who I am, and be true to myself.”

Even Griffin hedges on the leadership question. “For any player in this League who wants to be a great player, an All-Star, the first thing you have to do is sustain your high level of play over a stretch of time,” he says. “Jimmy is on the brink of that, as you can see by him being an All-Star two years in a row. That is how you earn the respect of your teammates and the entire League.”

Is that enough? One person close to the Bulls describes Butler to me as “moody, up and down, and definitely not a leader.” Another says “he’s definitely ‘gone Hollywood,’” and it’s not meant as a compliment. There have been stories—some published, some not—that describe a tension-filled Chicago locker room that is desperate to have one voice give some order.

Jimmy Butler is one of the most unique talents in a League filled with preternatural athletes. He is newer to superstardom and its accompanying trappings than anyone else in his position because of the lateness with which it came to him. He plays for a team with a history of divisiveness between and among coaches, players and the front office, with a skeptical, impatient fan base spoiled by the six-ring era.

Personally, I think everyone should chill. Embrace the player Jimmy is becoming. Take note of the renaissance Derrick is enjoying. Picture them each at full health as the season hits its homestretch and heads into the Playoffs where a ton of other flawed teams await. It may work out after all.

And if it doesn’t, well…Jimmy Butler has proven time and time again that he will put in the work to get better.