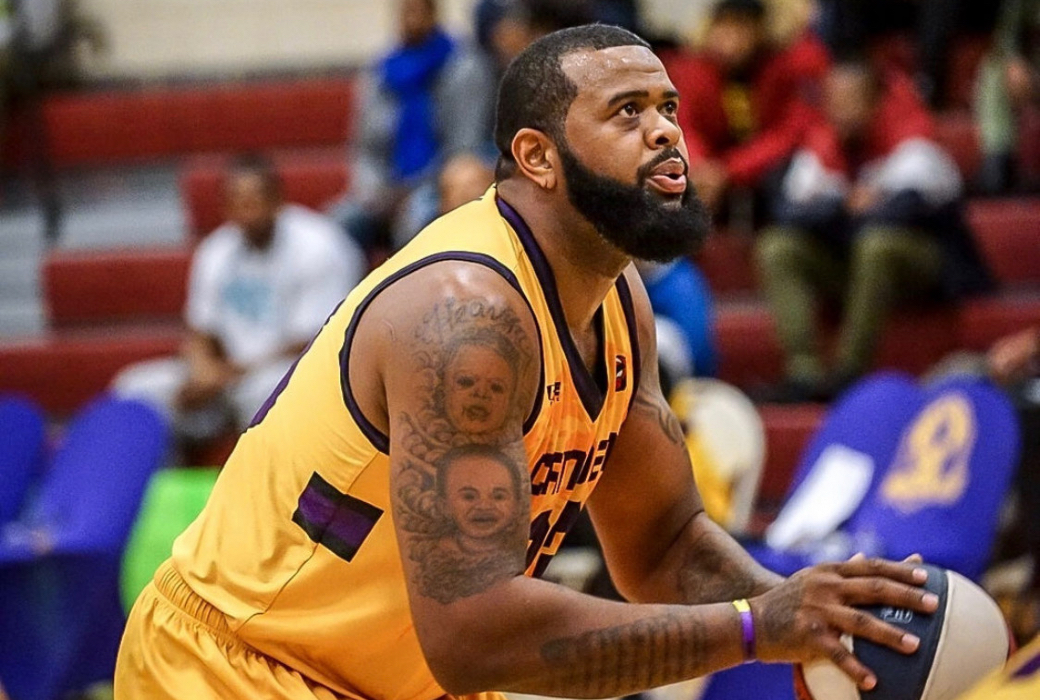 Lenny Cooke calls out to the DJ, an 11-year-old kid named Amir standing beside two large speakers. Amir obliges, and Drake’s voice is suddenly booming through the Kroc Center.

Sitting a few rows behind the DJ set, it suddenly occurs to me that Amir probably knows very little, if anything, about the man he’s just interacted with. He wasn’t alive when Lenny Cooke was the biggest high school basketball player in the nation, as highly regarded as LeBron James, Carmelo Anthony and Amar’e Stoudemire, who were coming up at the same time.

While LeBron is in Los Angeles, preparing to take on the Minnesota Timberwolves at Staples Center, the 37-year-old Cooke is warming up for his own game here in New Jersey. He’s recently joined the ABA’s Camden Monarchs, a semi-pro team that emphasizes giving back to the local community, for one last season before hanging it up.

Tickets, which come in the form of purple and gold wristbands, are $10. All concessions are $1. There’s a piece of paper taped to the door of the gym that reads, “No dunking or hanging on the rim,” but no one listens. The 24-second shot clock is a small, tabletop device. An MC positioned courtside grabs people from the crowd to have dance-offs in the middle of the floor during timeouts.

All in all, there are no more than 50 people in the stands. But that doesn’t matter to Cooke. He has a game. He’s trying to lock in. He needs the music turned up.

“I love just being out there,” Cooke tells SLAM. “I enjoy it. It’s the same feeling I had back when I was playing at a high level.”

Back then, roughly two decades ago, Cooke was the star on every team he played for. He was on track to become one in the NBA, too, but difficulty in the classroom, poor advice and a few wrong decisions led him down a different path.

“Misjudgment, arrogance, attitude—all of those things played a factor in my career,” he says.

Cooke won MVP of the prestigious adidas ABCD camp in 2000, was the No. 1 ranked prospect in his class and received interest from every major college program in the country. He played AAU with Joakim Noah and matched up against James, Anthony, Stoudemire and many others who went on to be successful in the NBA.

Having exhausted his eligibility, Cooke was limited to showcases his senior year of high school. He was less visible (“If I had social media when I was playing, you can only imagine the hype”) and scouts raised questions about his character. Cooke still tried to make the jump straight to the League in 2002. He hired an agent, disqualifying him from the collegiate level, and went undrafted. He made a few Summer League squads but never got an opportunity on an NBA roster, instead pursuing a career overseas.

In December of 2004, Cooke was in a near-fatal car accident. He suffered a broken left shin and femur, with doctors initially fearing they’d have to amputate his leg. Relegated to a wheelchair for two-and-a-half years, he was told he’d never play again.

He returned briefly in 2008, signing a deal in Kuwait, but was out of shape and the accident had stripped much of his passion. He opted to walk away from basketball.

So why, all this time later, is Cooke back playing again? He’s 10 years older than basically everyone else on the Camden Monarchs roster. He struggles moving up and down the floor, like he’s pulling his damaged legs through quicksand. As his teammates elevate for impressive windmill dunks in warm-ups, Lenny never attacks the rim. He stays beyond the arc, content to launch deep treys with little bend in his knees. When the Monarchs push in transition, he often hangs back to conserve energy and watches over the action like he’s one of the coaches.

His body isn’t equipped to dominate as it once was, though his basketball IQ is apparent. Now a low-post big man (he was more of a versatile small forward in high school), Cooke gets the ball on the block, studies the defense and makes smart reads. He can overpower defenders with his size and strength, but rarely looks to score.

In other words, Cooke isn’t doing this to light up the stat sheet. It’s not for shine or self-validation. Since 2008, he’s increasingly embraced a new mission—to be a mentor in any way possible, using his personal experience to impart wisdom and steer others in the right direction.

“I know my role,” he says, after the game. “It’s more so being a mentor to the guys, telling them what it takes to be professional.

“Those are my little brothers. Each and every one of them. All 13 of them,” he adds, scanning the Monarchs’ makeshift locker room. “They call me. I’ll get calls tonight, like, Man, how do you think I did? Did you think I didn’t do this? Did I do this, this way? That’s what I enjoy about this. They look up to me. They want advice because I’ve been there.”

“I actually meet up with Lenny so I can get to practice,” explains his teammate, Shaun Wilson. “And literally every time we’re in the car together, I’m just picking his brain about everything. He just drops so many different jewels. Telling me past experiences, telling me things that I need to look out for in the future, things that happened to him. He doesn’t have a problem expressing anything.”

“With the experience that he has, his maturity and his basketball IQ, not only is he productive on the floor as a player, but he’s also helping those guys and teaching them how to play the game, how to be a professional,” says Monarchs head coach Tony Coleman. “He really is almost an extension of me, as an assistant coach on the floor.”

Before tip-off, Cooke huddles the starting lineup together to talk strategy. He does so throughout the game as well. When his point guard calls out a play, Cooke—regardless of where he is in the gym—repeats it three times louder. He instructs guys on when to slow down the pace, stopping their forward momentum with a simple raise of his bulky arm. He screams for them to set up the offense.

Whatever passion was lost following the car accident has been restored. He’s the most animated person on the court. Teammates on the receiving end of Lenny’s daps are left shaking their hands. He bangs his chest emphatically, not unlike LeBron often does, after dropping a beautiful backdoor pass in the midst of a huge run in the third quarter.

He still loves the game of basketball, even if the game hasn’t always loved him back.

“His passion is undeniable,” says Coleman. “Certain guys, they just have that ‘it.’ That burning passion on the inside. He has it. As long as he’s going to be involved with the game, whether he’s playing or he’s coaching or being a mentor or whatever, he’s always going to have that fire and that passion.”

Win or lose, Cooke understands the bigger picture. He’s with this organization to help others reach a higher level, to guide them on their still-unfolding basketball journeys. Though this will be the final step of his career, the same cannot be said for everyone else on the Monarchs. Most of the guys, Wilson included, hope to find opportunities overseas or in the G League.

“We got a great group of guys and I just want them to use this opportunity to be able to go somewhere else and be able to provide for their family doing what they love to do,” he says. “As I got older, I started realizing it wasn’t meant for me. My blessing is to share my story. Be that example for someone else. Prevent them from going through what I went through.”

“He’s like the big brother of the team,” describes Wilson. “Whenever we got problems, he’s the first person we look up to.”

For several years, Lenny’s been coaching at local high schools and delivering motivational speeches to camps and colleges. Recounting the past brings him no pain or frustration. It does the opposite, really.

This, he says, is the last chapter of his hoops story. Not when LeBron nailed that game-winner to bury his team at ABCD camp in 2001—a moment that many label as the breaking point between the two incredible talents. Not the night of the 2002 NBA Draft. Not the day of his car accident. He is retiring on his own terms, doing the work that he feels he was always meant to do—his “calling.”

“People were just judging me off of what they saw in high school and never gave me a chance to grow,” he tells SLAM. “Nowadays, people just look back on that. They don’t care what I’m doing now. But I’m going to make it known what I’m doing now.”

And you feel like what you’re doing now is…

Lenny cuts me off.

“It’s way more important than what I was doing back then.”

Photos via Getty and H&H Visions.