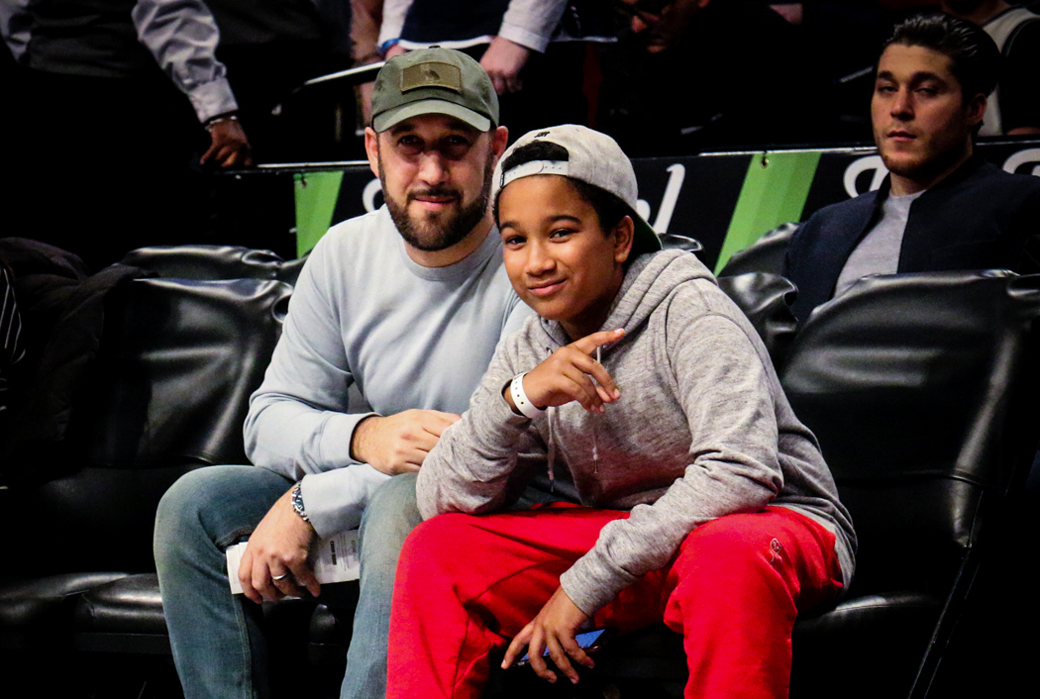 As the 2010s came to an end, the worlds of basketball and music found themselves more connected than ever. Collaborations seemed to happen all the time. And in 2019, one place in particular stood as an epicenter of success in music and hoops: Toronto. The most streamed artist of the decade was from the 6ix, and so were the reigning NBA champions.

One person who’s been front-row to all the growth—in Toronto specifically—is Mr. Morgan, a Toronto native and president of Drake’s label, OVO Sound.

“I remember sitting in the 300 level,” says Morgan of the Raptors’ first season in 1995, when they played at the 50,000-seat SkyDome. “But just the fact that we were there watching was just like, Wow, I’m watching an NBA game! I’d say the very large majority of the people there had never seen an NBA game before.

“Canadian networks were not covering basketball at all. So you’d have to get it through US networks—you had to dig for it. But, also, it would drive the passion for it because you had to look for it. To see it reach those heights [in 2019], it’s unreal.”

A DJ (under the “Mr. Morgan” moniker, which is how he’s widely referred to in the industry these days) in Toronto in the ‘90s that specialized in hip-hop as well as “old soul, brakes and sample tapes,” Morgan eventually moved to New York, where he became a consultant for Atlantic Records and then VP and SVP of A&R at RCA Records before taking the helm at OVO Sound.

“When I came to New York I was always an advocate for the fact that there were rappers in Toronto. At the time, for the most part, people were pretty dismissive about it,” he recalls. “I wanted to get music in people’s hands. I got to a place where I was offered a job at a label. But once I was inside an actual building, I realized there were so many pieces to it. A big part of it was being an advocate for trying to get artists exposure, as well as producers.”

Aside from overseeing all operations at OVO Sound, Morgan also manages some of the biggest producers in music—including Noah ‘40’ Shebib, Vinylz, Supa Dups and Nineteen85—under his M3 Entertainment firm.

“Around 2008 was a crucial moment for me. It was the first true breakthrough success I had. I was consulting for Atlantic Records at the time, so I was working for Sean Paul at the height of Sean Paul. I was managing Kardinal Offishall from Toronto. He collaborated with Akon on ‘Dangerous’—which became a big hit at the time,” says Morgan. “I was part of signing Estelle, who was signed through John Legend. We did the record ‘American Boy,’ which became a worldwide hit. People were pretty dismissive of it having a real shot. We were reaching globally and it gave me a whole new perspective on how quickly things could go in that direction and build from there.”

Despite moving to the Big Apple, he remained a die-hard Raptors fan for a decade-plus. But in 2013, he made a life-changing decision (for a sports fan, at least).

“I lived pretty much across from Barclays [Center] and watched Barclays be built—with my son, we literally watched out of our window Barclays being built. We said, When the Nets get to Brooklyn, we gotta rock with Brooklyn. We’re going all in. That’s the only time I made my shift over. Toronto is still in my heart but they’re going to be second to Brooklyn.”

They’ve been season ticket holders ever since and now hold courtside seats, where they often get a chance to chop it up with some of the League’s biggest stars—including Kevin Durant, who has become a family friend over the past few years.

The very first ever regular season game at Barclays Center was originally supposed to be against the crosstown rival New York Knicks, but it ended up being postponed in the aftermath of Hurricane Sandy. As a result, the first ever game at the arena turned out to be against the Toronto Raptors. And then the following season, Brooklyn faced off against Toronto in the first round of the playoffs—a series that went to a Game 7 and saw Brooklyn advance.

“That was the first time I had everyone in Toronto saying, ‘How could you be a Brooklyn fan? How could you be cheering for Brooklyn?’ Drake came to Brooklyn for Game 6. I went to Toronto for Game 7,” recalls Morgan, who still cheers for the Raptors as his secondary team and even attended two games in Toronto and one in Oakland during last year’s NBA Finals. “Brooklyn and Toronto haven’t really faced each other to that extent ever since then.”

While the Raptors took care of business on the court, OVO had its presence in the game felt as well. In 2019, OVO became the first music entity to have its name/logo on a major pro team’s jersey and practice facility when it entered into a new partnership with the Raptors. The famous owl emblem has been printed on the practice uniforms, and the Raptors’ training facility was renamed the OVO Athletic Centre. Throughout the years, there have also been multiple OVO-themed alternate game jerseys and merch.

“First and foremost, it really isn’t intentional,” says Morgan. “It’s just natural progression. It’s natural relationships. It’s really being fans of both—of music and of the sport. I think that’s the most powerful part. It doesn’t matter what realm you’re talking about—business, music, sports, whatever—if something doesn’t feel entirely natural, your average person and fan realizes that. Generally, when someone puts a logo on a jersey, [you say,] Oh, that’s paid advertisement. You realize that. But the branding on the court, the practice facility—those are things that go hand-in-hand. I think the main thing, and why it’s most impactful, is it’s truly natural.”

On the flipside, hoopers are creating music more than ever before. Damian Lillard, Lou Williams, Lonzo Ball, Lance Stephenson, Victor Oladipo, Marvin Bagley and Andre Drummond are just a few. LeBron served as the A&R of 2 Chainz’s Rap or Go To The League album in 2019. Agent Rich Paul reportedly served as a co-producer on Fat Joe’s Family Ties album.

The bond between hoops and music clearly seems tighter than ever.

“The impact of both music and basketball—the energy, the excitement, the reaction to it—I think there is a little similarity in just the way people deliver on the court or on records. If you look back at even the AND1 Mixtape Tour—the freestyle and creative aspect of it,” says Morgan. “Just artists being fans of it all. You talk about @LeagueFits, that goes hand-in-hand with the music culture. Part of the connection is everyone on the music side is just as passionate about basketball as a lot of these players are about music.”