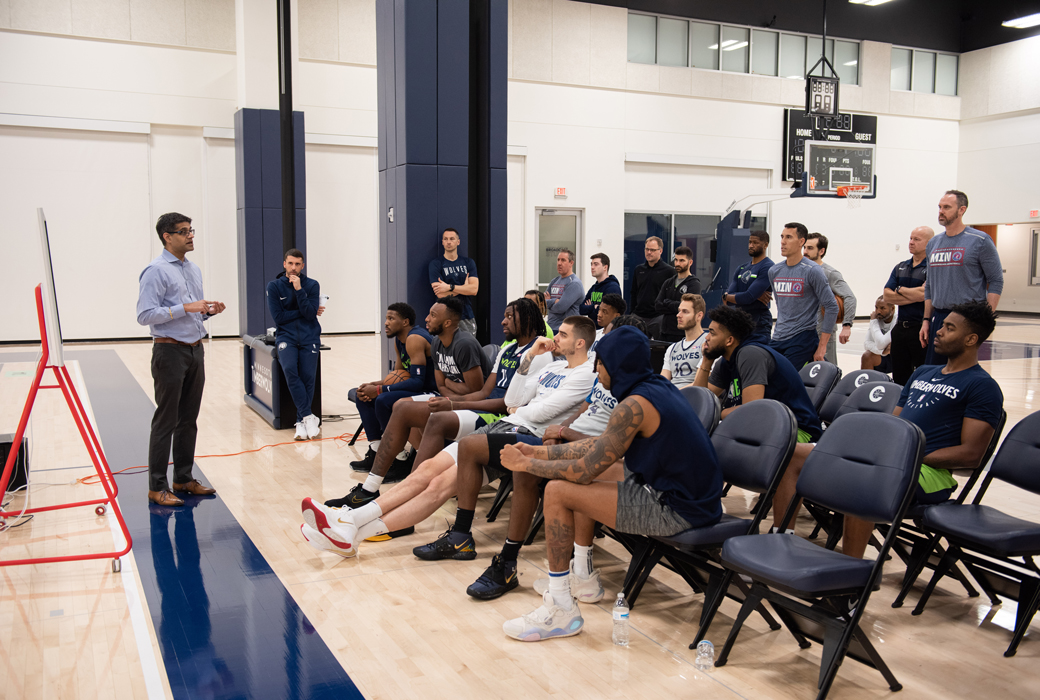 Every day looks different for Robby Sikka, the vice president of basketball performance and technology for the Minnesota Timberwolves.

He probably interacts with somewhere between 25 and 50 people, whether it’s via phone or video conference. His tasks range from deciding the food on the team’s menu to understanding and strategizing how they should address the COVID-19 crisis. He’ll arrange medical care, talk to players about their physical and mental health, drop constant updates on the pandemic in the organization’s communications platform (which he helped build), study new sports science data and connect with business CEOs, social justice activists, wellness experts and more.

What that family specifically asks of Sikka has obviously changed since coronavirus shut down the NBA in mid-March, but his overall role has remained the same—draw from various sources and unite diverse perspectives to come up with the best solutions to problems. In fact, that role is as important now as it’s ever been.

Sikka’s father moved to Minnesota from India in 1969. He fell in love with the local sports teams immediately, recognizing his fandom as one way to assimilate to a new culture. The Timberwolves were founded in 1989 and the Sikkas became season ticket holders right away. From the days of Tony Campbell, Sam Mitchell, Pooh Richardson and Tyrone Corbin, Robby was completely hooked. It was the centerpiece of his youth and brought his entire family together.

He watched the league’s biggest stars whenever they came to town and saw JR Rider win the Dunk Contest when Minnesota hosted All-Star Weekend in 1994. He was at their first ever playoff win against Seattle in 1998. He travelled back and forth from Penn, where he went to college, any weekend that both the Wolves and the Vikings were playing. He went to Game 7 of the 2004 Western Conference Finals a day after his graduation, getting home with just enough time to nap before heading to the Target Center. His engagement party was in a suite at the arena and his wedding was in the Marriott hotel just across the street. Much of his life, he proudly admits, has revolved around that building and that team.

Following the path of his relatives (26 physicians), Sikka worked toward a career in the medical field. His plan, after a summer job with an orthopedic center serving pro sports franchises in Minnesota (TRIA), was to become a team doctor. That vision was thwarted when Sikka was diagnosed with keratoconus, a progressive eye disease that prevented him from operating. He transitioned to becoming an anesthesiologist and devoted himself to the new job. But his passion for sports always tugged at him, and he kept pursuing ways to make it a part of his profession.

“I’ve always been of the opinion that if there’s something that you’re studying late at night, you should find a way to make that your job, because then it’s not work,” he says. “I don’t mind working until two in the morning, reading and understanding concepts related to sports and physiology.”

In 2013, Sikka came across the Twitter account of Jeff Stotts, a certified athletic trainer. Stotts was studying sports injuries and recovery times and compiling his data for NBA teams. It was exactly the type of research that kept Robby up until 2:00 am. Sikka reached out and the two soon formed a partnership, creating the Sports Medicine Analytics Research Team (SMART). The business combined medical knowledge and analytics to advise NBA front offices about player health/injury prevention, proper treatments, when athletes should return from the IR and more.

Minnesota’s president of basketball operations Gersson Rosas was one of many who noticed the value in such forward-thinking and vowed to incorporate it further into his organization. He hired Sikka in June of 2019, just a month after taking over, and suddenly the kid who spent his childhood idolizing the Wolves was a key part of the franchise.

Sikka quickly got to work learning about the players and their routines (fitness, eating habits etc.) in order to develop individualized training/nutrition programs that utilized data and catered to specific preferences. He employs technologies like KINEXON to track player movement on the floor, creating even more precise blueprints. His insights instantly helped the Timberwolves decrease their injury rates.

“Some guys want to have the same meal every day, so maybe we got to modify the portions depending on what their activity was. Maybe we got to modify the hydration because the meals are going to be the same,” he explains. “There are all sorts of things that you can change because you’re trying to get an athlete to peak mentally and physically at the right time. It’s not necessarily about working harder, it’s about working smarter. We need to be efficient with what we do in every possible way.”

As coronavirus spread across the globe, Sikka had a feeling—given his background—that it was going to be a much bigger crisis than most anticipated. But even he couldn’t have predicted the severity of what’s ensued over the last several months.

“I don’t think anybody in the country recognized how challenging this would be and how this virus would pick at some of the weakest parts of our culture and point out the divisions in our society,” he says. “And now we have a chance, because great moments are born out of great opportunities, to heal and to come together. I’ve always tried to bring interesting, intelligent groups of people together to collaborate on projects.”

Due to his unique skill set, Sikka has been at the core of Minnesota’s response to the pandemic, as well as the NBA’s at large. He’s been spearheading a collaborative investigation into the effects of the disease on the league and is one of ten members of the NBA’s sports science committee, which has been a vital resource during this time. The committee zeroed in on three questions in helping the NBA conceive the restart in Orlando: 1) If we return to play, how can we do it safely? 2) Once we’re there, how do we keep everybody in the area safe? 3) How can we come back in a way that benefits society as a whole and provides a model for others? The NBA and NBPA announced on Wednesday that of the 344 players at the Disney World campus, none had tested positive for the coronavirus since results were last released on July 20.

All the while, Sikka has been a major factor in holding his tight-knit Timberwolves circle together—the one that has meant everything to him ever since he was a little boy. He’s constantly on the phone checking in with staff and ensuring that everyone adheres to the necessary protocols and gets what they desire (the Wolves have been delivering meals to their players and dropping off groceries at their houses since March). He understands the devastation caused by coronavirus and worries that others don’t. He knows we must be there for each other, now more than ever.

“For people that have lost someone, the social elements of this disease are things that people have a very tough time comprehending. The isolation, the potential for dying alone, the feelings of being overwhelmed—those are real things,” he says. “We don’t see enough of the faces that were lost right now. We’re forgetting about those faces and ignoring a lot of that around the country. That’s the thing that scares me now and it’s part of the reason I’m willing to talk about it. We have to do our best to protect each other, just like we’ve done within the Timberwolves. We have to protect our family.

“Bringing smart people together to come up with smart solutions is what’s going to get us out of this,” he adds.

And that’s what Robby Sikka does best.