The Salam School Stars Are Bigger Than Basketball 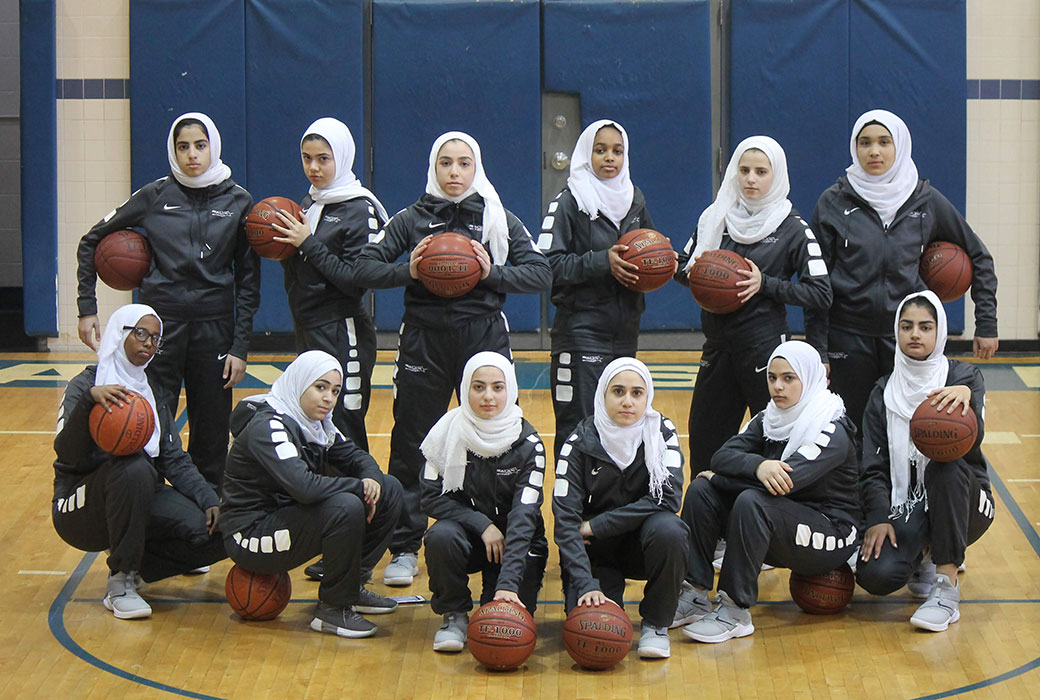 When an all-Muslim high school girls’ basketball squad on the southside of Milwaukee suited up for a scrimmage against their alumni, the last thing they expected was four-time WNBA champion Sue Bird to pop her head into their team huddle.

“You would never think somebody like her would come all the way to Milwaukee, WI, just to play with us,” says Safiya Schaub, alumna and former team captain of the Salam School Stars.

Schaub, now a student at the University of Milwaukee, joined the Stars as a seventh grader—her second year at the Islamic school.

The reputation of the team at the time was far from glorious. Finding players was like pulling teeth. Support in the crowd? Even rarer.

“We never really won a game,” Schaub says. “The hype wasn’t there back then because we didn’t win.”

Fast-forward to Schaub’s sophomore year in 2016, and there was a new head coach in town—former University of Wisconsin player Kassidi “Coach Kass” Macak.

Macak saw potential in the girls, but she needed more gym time to tap into it. Salam School had one elementary-sized gym that nine competitive teams rationed out throughout the week. Macak managed to get the girls a slot to practice every day instead of the 2-3 times a week they were accustomed to. As she expected, the girls improved quickly.

“I hit the sweet spot—it was a good time for me to come in,” says Macak. “Those girls were committed, they wanted to get better…they didn’t want to be the joke of the school.”

As they tallied more wins—they finished 14-5 in Schaub’s senior year—the Stars saw support grow. Local and national media outlets had their hijab-clad faces gracing the print and digital pages of publications like The Milwaukee Journal Sentinel, The Washington Post, CNN and Bleacher Report to name a few.

“We were blown away, our little Muslim school,” says Dave Petrick, athletic director of Salam School. “We had a very good team, and Coach Kass is a very dynamic individual. We are very lucky to have found her.”

Petrick laid the foundation for the athletic program at Salam School. He joined in the early 2000s as a physical education teacher back when the school had no equipment and concrete as a gym floor.

“Our first basketball game we ever had here, I ended up taping the court with floor tape so that we could actually play,” Petrick says. “I did it all on my hands and knees—I was younger then and more ambitious.”

After building the boys’ basketball team, Petrick and Head of Salam School, Wanis Shalaby, worked with the greater Muslim community to establish a girls’ team that could eventually play a full schedule and host home games at the Islamic school’s campus.

“As an educator, you have to be a person of an open mind. You have to be progressive,” Shalaby says. “If you keep telling girls that they are equals, while at the same time they are not receiving equal treatment, you’re fooling nobody.”

The Stars do fool some people, however.

When walking onto a new opponent’s court with their modified uniforms of long sleeves, sweatpants and Nike-sponsored hijabs and sneakers, the Stars are often met with confused stares. The home team usually doesn’t take the pre-game warmup seriously.

“It was an advantage almost,” says Macak. “I think that’s the coolest thing—you’re the underdog, and you go out there and prove someone wrong.”

After the ball tips, the Stars shine bright. They play their aggressive style, take care of what Macak calls “the controllables,” and show everyone what they’re capable of.

“It sounds like one of the things we might have in common is some naysayers, right?” Sue Bird told the girls at their scrimmage covered by an all-female crew at Bleacher Report. “That’s something that as a women’s professional athlete, sadly, we face all the time—and it’s tough. It’s OK to feel bad about that and then realize, No, what somebody else thinks of me doesn’t mean anything.”

Schaub likes to take the high road and credit any hostility to the physicality of the game.

“You get in each other’s face,” she says. “But I don’t want to think in a bad way…I might think it’s because of my scarf, but it could just be due to the competitiveness of the game.”

More than the doubters or harsh stares, Schaub and her teammates focus on the bond they’ve built under Macak’s leadership and the chemistry they’ve got on court.

“The relationship I made with my teammates—that’s what made it special,” Schaub says. “It was really nice to have that group of people with the same goals, striving. It’s an experience I will cherish forever.”