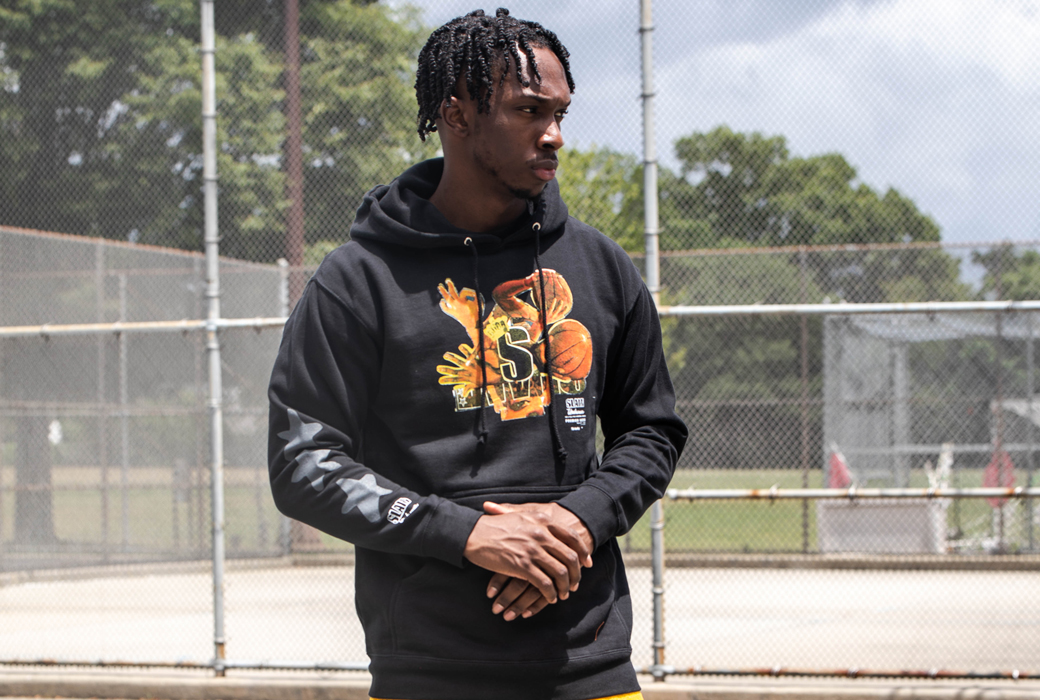 The first t-shirt UNDRCRWN ever created was featured in an issue of SLAM. It was an Allen Iverson flip with the words “Thug Lif3” printed in the same font as the Sixers logo. UNDRCRWN only made about 40 of them, unsure of how they’d sell. After all, there was little precedent for their unique approach to the industry.

“We entered this without any rules. The genre didn’t exist,” says Media and Marketing Director Kari Cruz, who’s been instrumental in shaping the look and feel of the lifestyle brand for over a decade. “People would look at basketball and kind of judge it as performance wear only. They didn’t understand that you could create products that came out of the culture that didn’t have to be a line or designed to play in. We’ve always said that there are more people in the stands [than on the court]. We as a community just wanted to storytell and highlight moments that have impacted our lives.”

UNDRCRWN was established in 2005 by Dustin Canalin, an artist and creative designer with experience working alongside top brands. At the time, there were few other businesses in the space trying to mesh sports and culture in an authentic, in-your-face way. Canalin set out to do in the fashion world what SLAM was doing in the editorial world. And, with the help of people like Cruz, he’s succeeded.

“We wanted to address it in a way that talked about sneakers, the fashion that people wore, and really kind of rode in on the hiatus of streetwear,” explains Canalin. “We basically just didn’t want to do what other people were doing. There was so much fan wear out there, and we were, like, bigger than fans. I think that’s what was cool about SLAM. Allen Iverson’s tattoos were more the story than him scoring 30 points. We cared about the innate details that only the true heads would know.”

With that vision in mind, UNDRCRWN began crafting apparel that spoke to and referenced way more than the game itself: A tee with the famous Vince Carter dunk from the Olympics printed across the front, except instead of VC, it’s President Barack Obama; another with the members of NWA rocking custom Lakers uniforms; one with Biggie in a colorful East All-Star jersey next to lyrics from “Things Done Changed.” The list of their legendary pieces goes on and on.

UNDRCRWN’s vibe has always been similar to SLAM’s, leading the two to combine forces on several occasions. Now, with @SLAMGoods off and running, comes their biggest collaboration yet: an exclusive new line, celebrating the premier issue of the magazine and basketball’s ever-growing impact worldwide.

“Coming up with the idea for the collaboration, we really wanted to unify both brands,” says Cruz. “We have always seen SLAM as an authority, as our basketball bible. It was these pages that helped shape conversations and helped educate us and give us a point of reference. We wanted to take the actual pages of the magazine and take visuals and combine them in a way where it created these large scale collages that illustrate what motivates and inspires us, and how SLAM has been part of our life for as long as we can remember.”

Check out some images of the drop below:

Going forward, the iconic UNDRCRWN will maintain the same core identity while also evolving to what’s become the norm.

“I think there’s a lot of SLAM in UNDRCRWN and a lot of UNDRCRWN in SLAM,” Canalin says. “There are so many people doing what we both were doing ten years ago that [now] you have to do what other people aren’t doing.”

That was the goal for this latest project with SLAM and for perhaps more down the road.

“I hope that this sparks some memories for some of our older fans and some new fans—people that have always wanted to see a marriage between SLAM and UNDRCRWN,” adds Cruz. “I would love to see it keep going.”